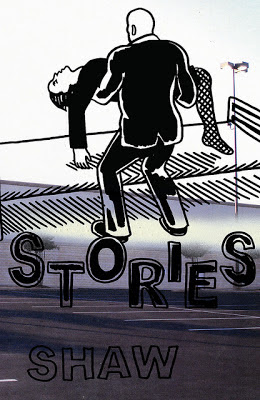 '3 New Stories' explores the juxtaposition and superimposition of images within the structure of text/drawing based comics (a.k.a. traditional comics) as a means of underlining the thematic nature of it's stories. Similar to Blaise Larmee’s recent work on Tumblr, where Larmee utilizes photo’s of teenage girls as both a coloring element for the artwork and as an image to haunt it's background. Shaw codes the pages of '3 New Stories' with layers of visual subtext that exist both as interesting color palettes, but also through their existence as “images” too create coded layers of meaning on each page (and the narrative as a whole.)

The first of Shaw’s stories 'Object Lesson' is about a recently out of work criminal investigator (closely resembling Sherlock Holmes) who discovers that his High School degree is invalid because his class did not meet the required number of school days to graduate. His lack of a degree makes him unable to find work, forcing him to go back to school to finish out the remainder of his school year, where he finds several of his old classmates in a similar predicament. 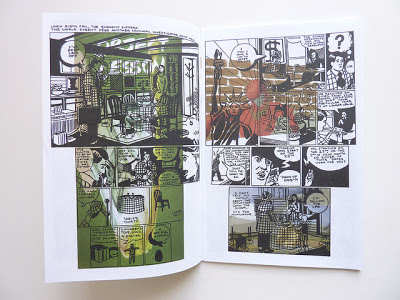 The idea of money runs throughout 'Object Lesson', it is a decidedly post-Recession piece, with work, education and monetization becoming the stories central themes. The opening page of 'Object Lesson', in juxtaposition with the first “page” of '3 New Stories' (an advertisement for Fantagraphics new Uncle Scrooge collection) shows the story of a man (Scrooge “The Richest Duck in the World”) jumping into a pile of gold coins next to a starving beggar being handed a few cents while taking up residence on the sidewalk (the sidewalk, while not depicted, is shown through a ghost image of a phone booth in the background). This image becomes even stronger when one looks at the bottom half of the Uncle Scrooge advertisement which shows The Beagle Brothers sitting hungry around an empty table. Both The Beagle Brothers and the beggar take on, in this story, the idea of failing to change to the new model, they are hungry because they did not learn to succeed in the new world order. Robbers, beggars and barons.

In contrast to this failure to change, we have our protagonist attending his first day of school, where he is exposed to it’s new for profit nature, book rentals and meal plans. “Public schools have really improved since our time”  he is informed by a cab driver dropping him off for his first day, a thought often repeated by his former/new classmates. After a few days of attending classes though he starts to wonder “This isn't how i remember High School at all...most of the school work is just filing and office work. It is as if we’re paying them to let us work for them. For no pay.” It is from these sentiments that our detective begins to investigate and unravel the new structure of work and school, the new form of beggars and bank robbers lampooned in the book’s opening pages are shown to be the interns of today. Graduates that upon completing their degree must go back to school to finish out their missing semester performing free office work for massive corporations.

Our hero, while discovering this system, is unwilling to overthrow it. Instead he finds a job in the school with gold plated lockers teaching World History to forty year olds and living comfortably, because he was able to, like Uncle Scrooge, monetize his education. 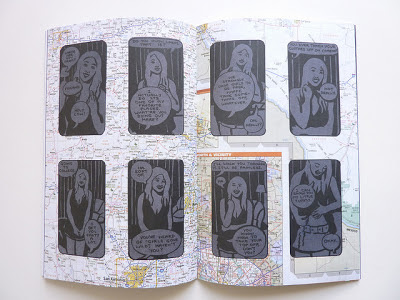 The following two entries in '3 New Stories' are shorter pieces, but Shaw continues to manipulate the issues advertisements and his own ghost backgrounds to reinforce his narrative purpose. 'Acting Is Reacting: Girls Gone Wild' follows Shaw’s previous forays into animating and illustrating “reality” shows (The Wheel of Fortune, To Catch A Predator, Blind Date);creating a possible 'The End Of The Fucking World' (previous pages ad) scenario to both the female depicted and her parents. Narratively speaking, this is a straightforward story, a foreign exchange student is “interviewed” by a Girls Gone Wild cameraman as they convince her to disrobe on camera. But by removing any geographic signifiers in the girls speech,  and featuring a shifting map in the background of each page, Shaw takes the idea of the “Foreign” Exchange Student, which one would typically attribute to an individual from outside the US, and turns it into a catch all for any female student residing in the U.S..

The final story, 'Bronx Children’s Prison', is about, as the title suggest, a prison for small children. These children are forced to work in the fields or risk harsh spankings, eventually these punishments reach the point that the prisons population stages an attempted break out, in which all but one is gunned down. Each page is colored by a unique set of dot matrices, from general polka dots to jelly beans to Jawbreakers, these images create an almost pop aesthetic to the the story which makes the harsh treatment of the children even more disturbing. The final page of the story though offers a sliver of hope. In a bit of self promotion, Shaw allows one child to get over the wall, finding freedom “ No friends left, but i’ll find more.” which is followed, on the book's final page, by a full page advertisement for his new book 'New School' which features an illustration of a boat, leaving the reader hoping the child is on board (I guess you’ll have to read 'New School' to find out though).


(This post originally appeared on The Chemical Box)
Posted by Shawn Starr at 12:56 PM