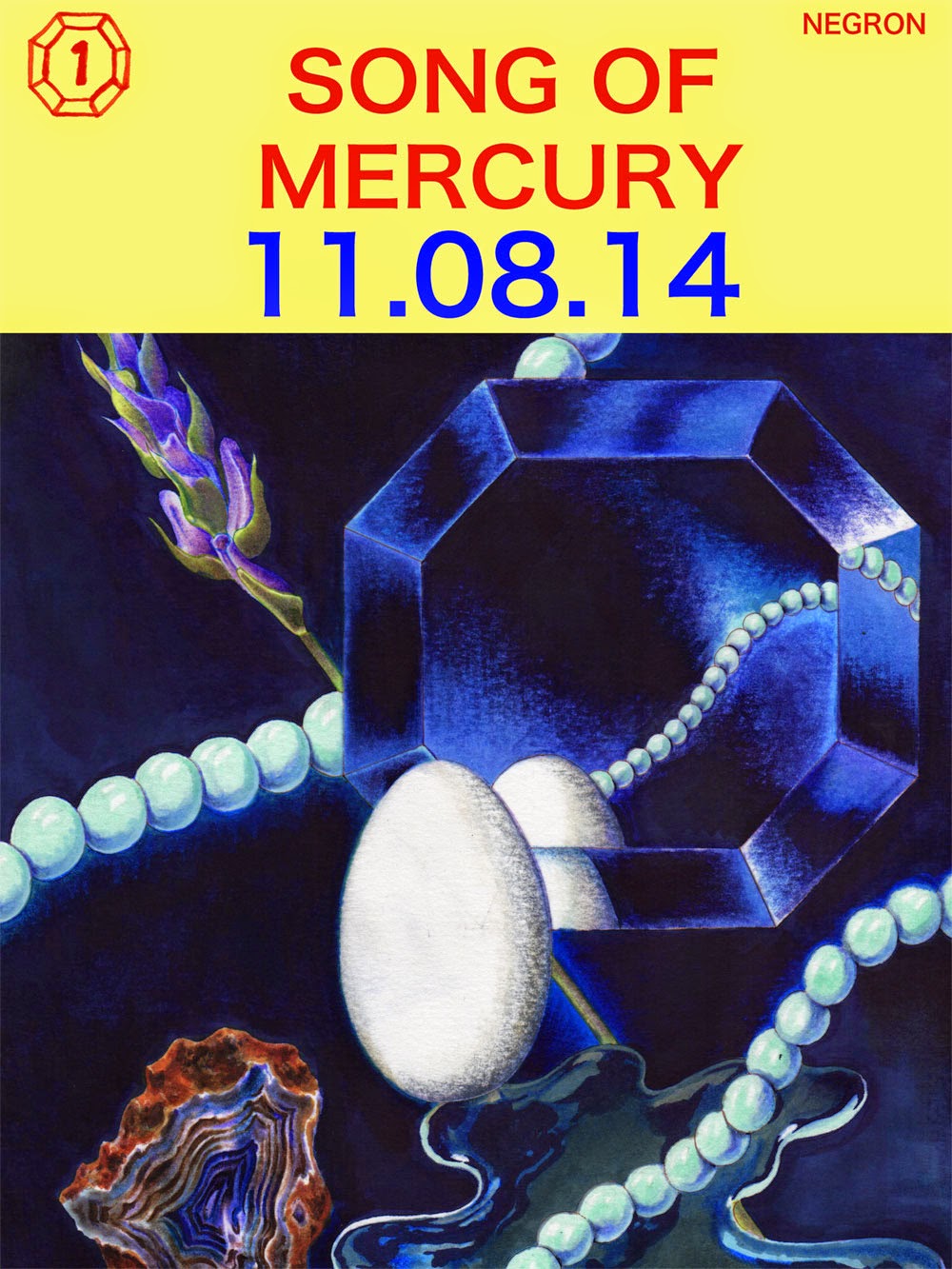 
Song of Mercury takes place entirely within the protagonists bedroom as he suffers through a bout of depression that's cause is only hinted at. Narratively Song of Mercury is almost unrecognizable as a Jonny Negron comics. 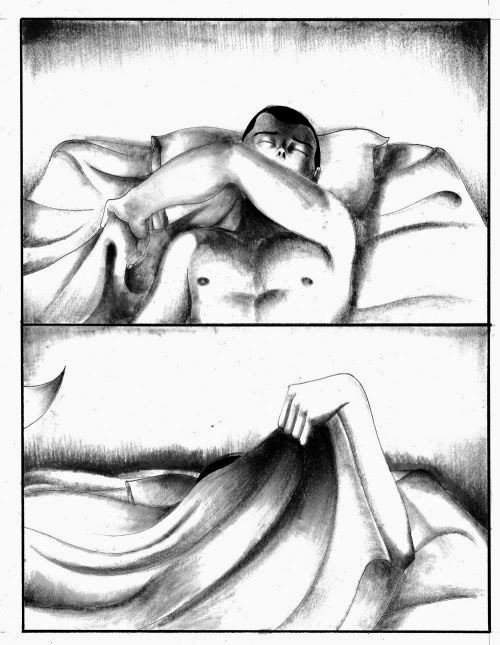 Negron’s work in Song of Mercury is based primarily on miniscule gestures. Where two years ago Negron would have illustrated each panel with a Kirby-esque fury, now it all revolves around the glint coming off a figures eyes as they collapse back in on themselves. This is not to say that Negron has unlearned the keys to action sequencing, instead he has redeployed them, shifting their focus while keeping the internal mechanics of them alive. 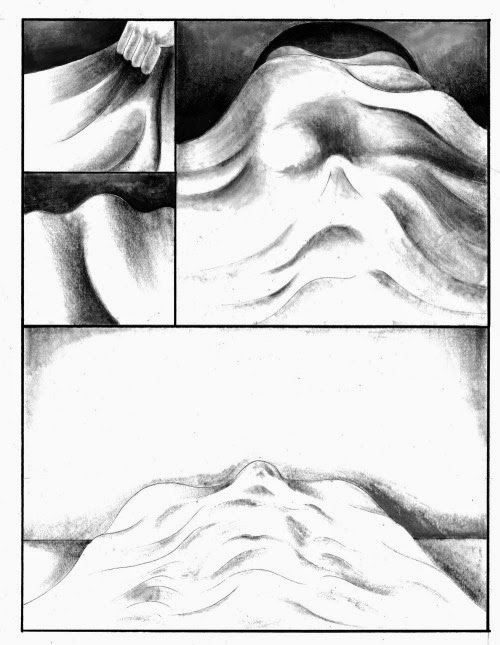 The key to an action sequence is in the depiction of the moments immediately before and after the impact. The actual connecting of the blow is of little matter. Like in wrestling you have to sell the idea that the action took place, not that it actually did. In Song of Mercury Negron though makes the connecting of the emotional blow the centerpiece of each image. You see the air leave the protagonists lungs and his will to live leave his eyes. And while there is still a build up to that moment, and an aftermath, it is in these almost infinitely small moments where the punch actually lands, that the book is built around.

These moments are so important because without them the spectre, which enters the narrative at its midway point when the protagonist is fully within the depths of his despair, would have no resonance with the reader. You need to see the light leave his eye to understand his embrace of her, not just the moment before and after. 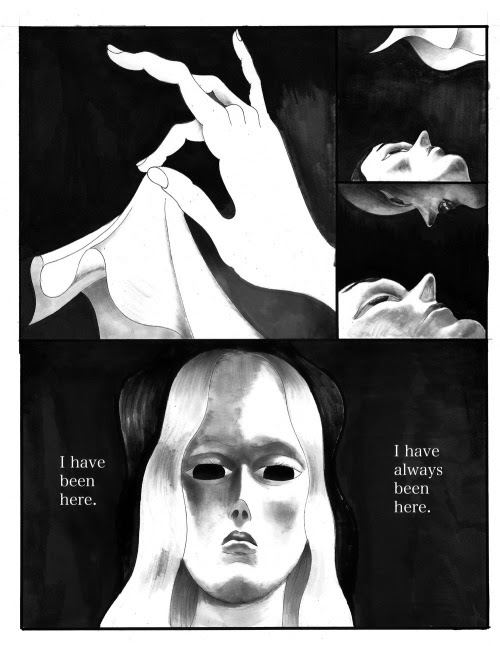 After the spectre enters the room and peels the blanket off the protaganists face, which now resembles more a death mask then a thing of comfort, at the stories midway point she says to him “I have always been here. I have always been with you. You belong to me. You have always belonged. To me.”. Following this line their eyes meet in a gaze that the panels and pages don’t seem to be able to, or want to, stop. Even when, on the following page, the two begin to kiss and the spectre bites the protaganists lower lip off, their eyes never unlock. It is the only moment of physical contact in this comic, but it doesn’t make you feel anything. The artwork conveys no shock or disgust with the act. It is the culmination of the void.

When the protagonist rolls out of bed on the following page he begins to read an obituary. The previous scene seems to have been a dream, but one livid enough to jostle him awake. We are only given an obscured view of the obituaries contents, but it seems that someone close to him has died. We read in a comment that the the doctors and staff of a hospital are sorry for his lose. When Negron pulls back the shot a bit in the next panel the image of a small boy flashes before us. We’re not given any further context as to who this boy is and what his relationship to the man is though, or if he was the one killed. 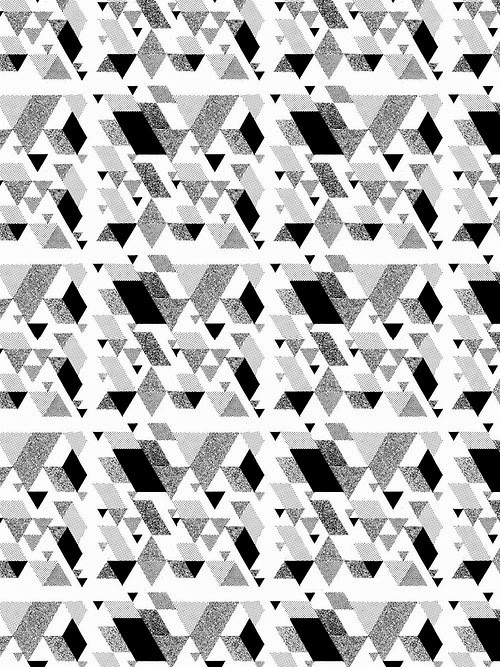 The final page of the story pulls out from the protagonists bed and moves towards his unkempt dresser top. Random trash is scattered across it, but your eye zeros in on an empty needle and exacto blade laying there. Their purpose hasn’t been made clear yet, this being a first issue though means that many things have to remain unsaid for now, but there connotations are explicit. When you turn to the back of the comic you see a series of 60’s inspired geometric pattern shifting from mint green to white. An aesthetic static.

And there you are left. In static and wondering.

Jonny Negron's Tumbler
Posted by Shawn Starr at 5:17 AM