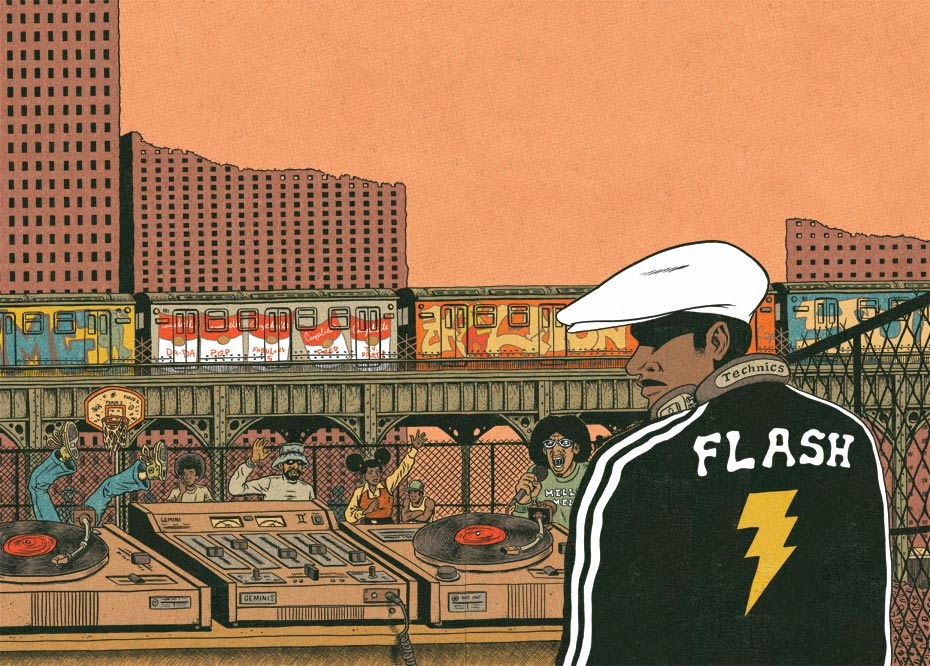 * On my first read i had a little bit of a problem tracking all of the characters. There has to be close to a hundred introduced in the book, both important to the time and important to the future. After finishing the first book i went to check out the comic in it’s online format and Piskor has a pretty well constructed and detailed tree showing each characters relationships to each other. I don’t think it’s possible to recreate that in the print medium

* Piskor’s choice to break the book up into small 1-5 page chunks helps the work have a more roaming narrative, allowing him to drop in and out of various moments and cleanly break away without it being jarring, but it also has the effect of not leaving enough room to capture each character fully. Outside of the big names in the genre mentioned i had difficulty tracking each group and individual as the story went on unless they were constantly referenced. After reading the first volume i checked out the webcomic version on Boing Bong and the inclusion of a detailed tree underneath each strip seems to solve most of this confusion, but in print, that seems impractical. 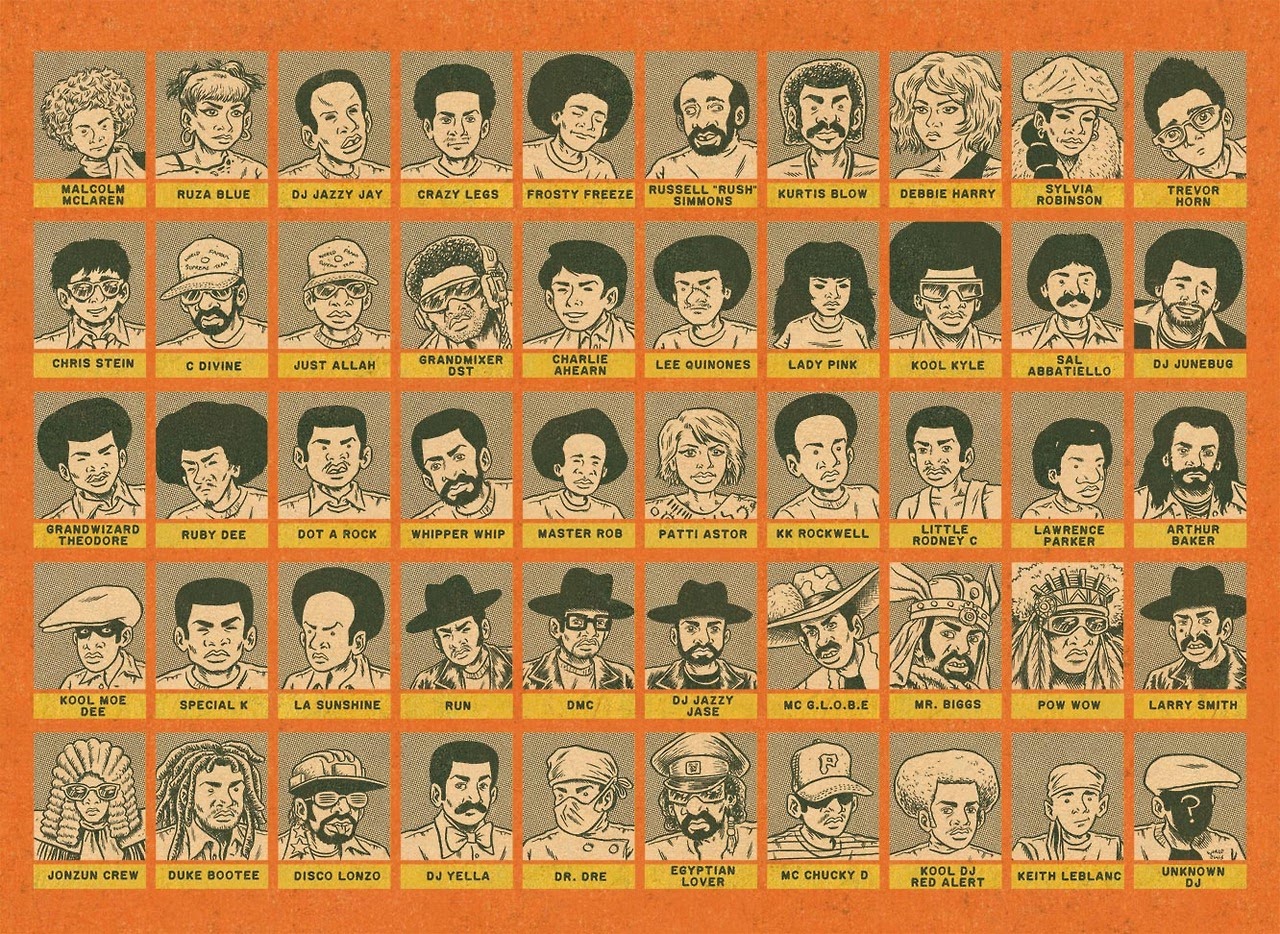 *I don’t think comics translates music that well, but Piskor easily comes the closest. Cutting the individual songs down into readable chunks, while still keeping their flow is no short feet and Piskor does this beautifully. There’s a rap battle that genuinely had me on the edge of my seat which is something i didn’t think a comic about music would be capable of.

* I really enjoyed Ed Piskor’s send off to 70’s comics both in the coloring and design of this book. It creates an age to the work that give it the feeling of being a living history rather than one written decades later. What i am intrigued about though is if Piskor is going to keep this aesthetic throughout the series or change it to keep in touch with the period. I’m not sure if the later decades in comics, with the exception of the 90’s which Piskor is doing a homage to in his Liefeld/Spike Lee crossover comic, have such a strong aesthetic tradition that would make them interesting enough to mimic though. Although i’m certain Piskor is a student enough of both hip-hop and comics to find similarities between the two as they change through the decades. 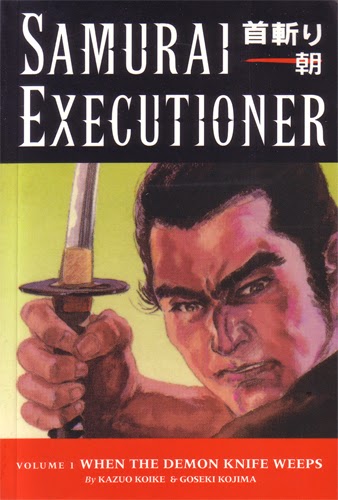 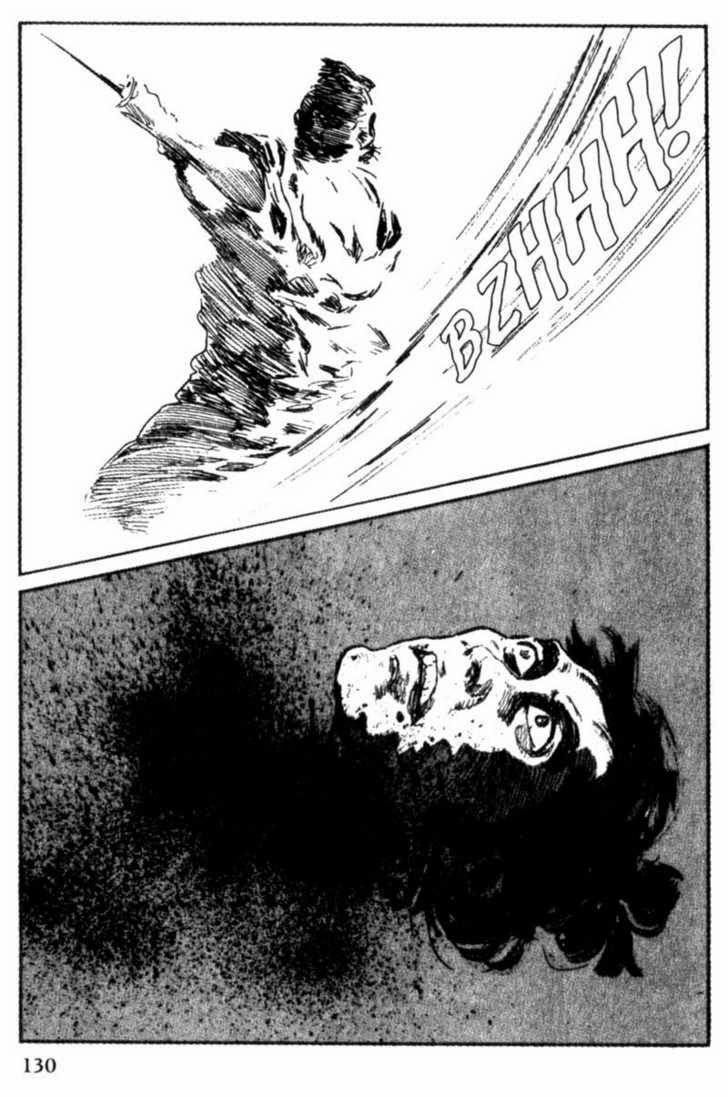 Lone Wolf and Cub is a top ten action comic. Samurai Executioner is a very similar comic by the exact same team and somehow it’s not nearly as good. The basic difference between the two is that Lone Wolf is the story of an assassin who is hired to kill various ne'er do wells, who we are given a ten or twenty page backstory to before Lone Wolf shows up and kills them. Structurally Samurai Executioner is structurally the identical, but where it fails is that by the time the executioner is brought into the story the prisoner is in almost every case bound and sitting before him with their neck stretched out (or in the rare case surrounded by police and about to be captured). While the stories behind the “villains” in Lone Wolf were always interesting it was the danger Lone Wolf, and more importantly Cub his infant son, faced on their missions that made the action mean something. Death was a real possibility, and on several occasions leading up to the final book, seemed like an inevitability. If Lone Wolf died, Cub died.


In executioner there is no threat. The first story in this collection made things all the more difficult because in it the executioner takes both the head of his father and the prostitute who took his virginity. When faced with those two head he hesitates for a second, but still takes them. Where can you find the moral conflict of a character after that when you know he will kill anyone.

It’s hinted that something occurs later on to displace the executioner, but if he is somehow banished then it seems like it would be better idea just to go reread Lone Wolf and skip the retread. 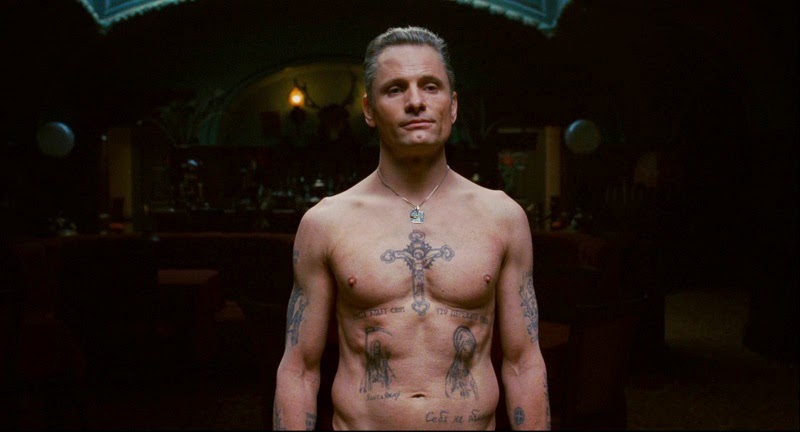 On the surface this isn’t what i would call a Cronenberg film, but like most of Cronenberg’s work  a sense of body horror is still central, but in this case it’s viewed through a different prism. The defacement of ones body through gang tattoos. Marks and symbols that tell ones ones life story, the crimes and atrocities, not as a means of repentance but as a biography for others to read and to fear. Even keeping spaces open because you expect that spot to be marked by a tattoo denoting advancement tells a story of its own.

Anyways i found that interesting and not much else. 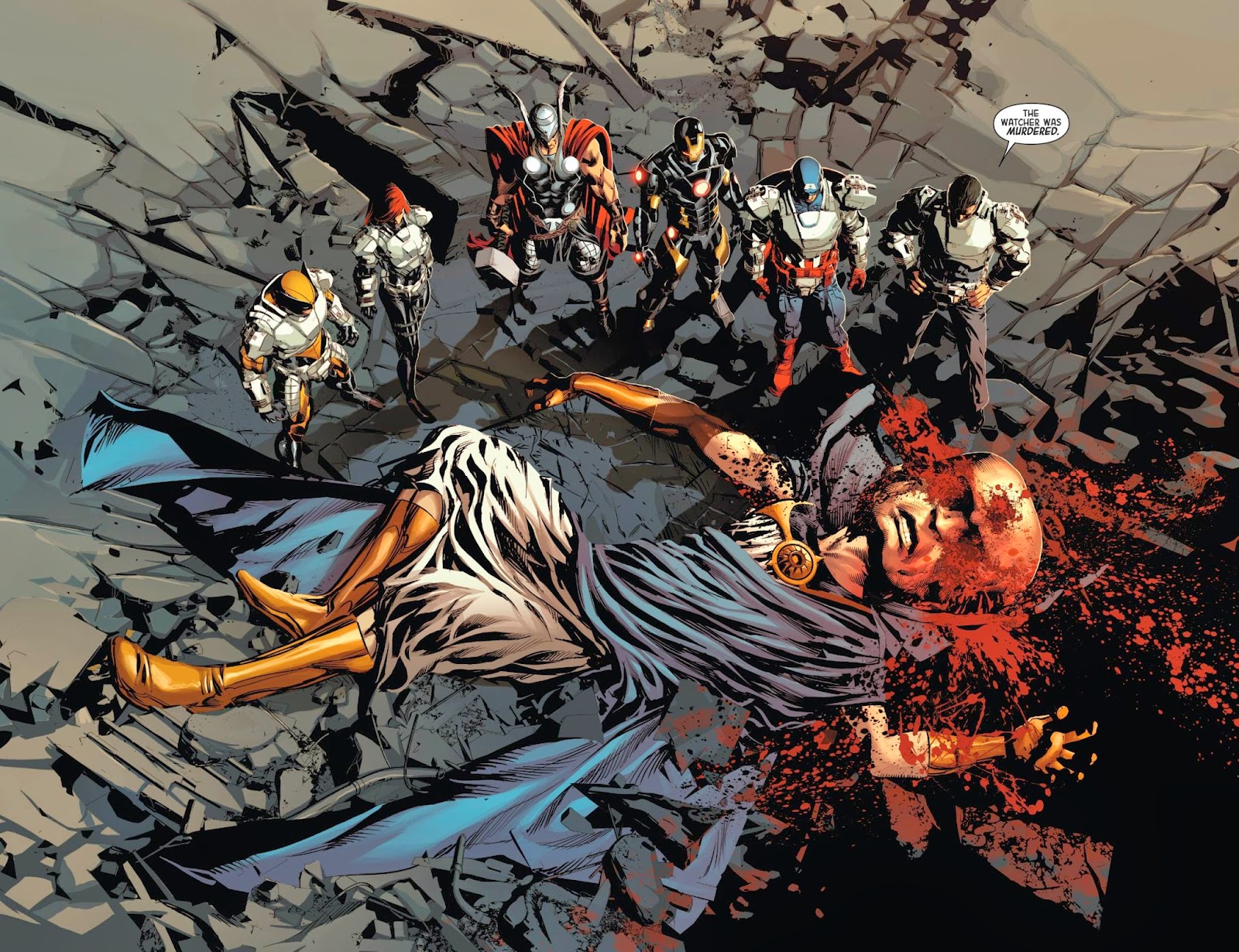 I liked the one page where it looked like they Photoshopped Frank Miller blood splatter everywhere.

I liked this short comic Annie Mok. From what little i’ve seen of Mok’s work she has a tenency to overload her panels with information, color, quotes, timestamps, asides, etc and while in most situations this would turn the individual panels gel into nothingness, an information swamp, Mok is able to pull out at just the last moment and retain the integrity of both the panel and the larger piece.

I was just thinking about how little attention War of Streets and Houses was getting besides this Alec Berry review when a bunch of interviews from Sophie Yanow dropped. The best is from Anne Ishii over at The Comics Reporter

A long post on Decadence Comics, a collective out of england which i first heard of through their various contributions in Mould Map 3. That Lando guy can draw. 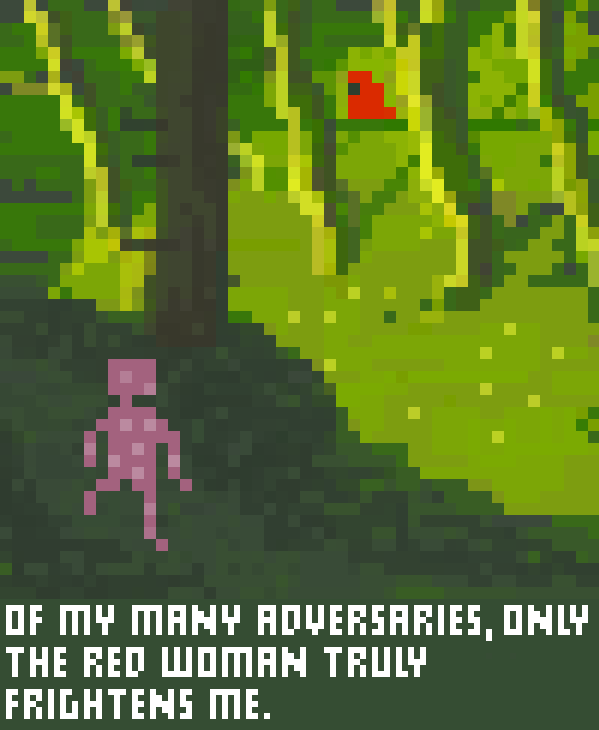 Sam Alden is doing pixel comics. They’re probably the best thing going on in comics at the moment. Here is the latest (as of my writing this). He was also interviewed on a the Make It Then Tell Everybody podcast recently. It’s primarily about craft which i always enjoy hearing.

An interview with Sean Collins and Julia Gfrorer about their comic In Pace Requiescat.
I liked this passage: “Sean: In “The Cask of Amontillado” I recognized a link between the genres of horror and pornography. Both frequently rely on a sense of certainty for their visceral emotional impact: When you begin to read or watch a horror story, you know that a terrible thing will happen, and frequently so does the character to whom it’s going to happen. In pornography, as in sex generally, you know that when your partner begins touching you, you have entered into a process that will end with you briefly losing control of your own body, unable to think of anything but the pleasure your partner is effectively forcing you to experience at the expense of everything else. In both cases that certainty is magnetic to minds trapped in our unforgivingly inconstant and unpredictable world. Dread and eroticism are two sides of the same coin neither of us can stop flipping in the art we make or consume.”


Al Feldstein passed away. Sadly i’m not that familiar with his work, i’ve never read any of those old MAD issues except for a few strips in the Kurtzman artbook and my understanding of EC is largely based on individual artists. I  did get a chance to read his semi infamous strip Judgment Day from Weird Fantasy which can be read here and while time has made it’s ending more and more on the nose it’s publication date being 1956 is pretty amazing.
Posted by Shawn Starr at 9:58 AM