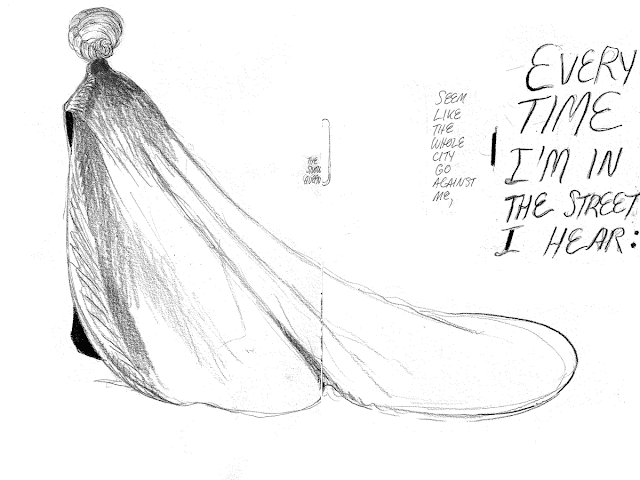 
“The Snow Queen” are the first words uttered in Elsa. A female figure with a long and overlapping black robe takes up the majority of the page. The line, half boxed in, reads as a narrative caption explaining to the reader who this person is, which seems like a bit of a joke. Elsa is of course the protagonist of one of Disney’s biggest films of the decade Frozen. The next line is a sample from Kendrick Lamar’s Backstreet Freestyle “Seem like the whole city go against me, every time i’m in the street i hear:” For anyone who’s heard Backstreet Freestyle the next line is an aggressively loud and visceral noise, but in Elsa Ferrick subverts your expectations and puts a ¾ shot of Elsa’s face as the sole image on the next page. Utilizing Disney’s “big eye” princess design, Ferrick creates a deeply resonating and soulful view of Elsa, as she places both hands on the collar of her robe you feel everything tightening around her as her mournful eyes draw you in. 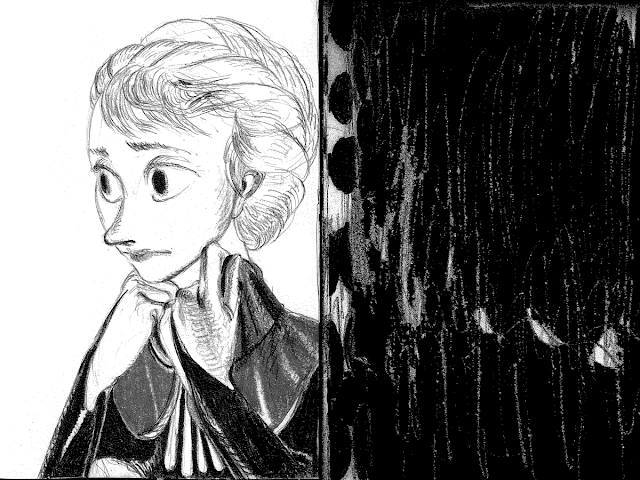 The next page in the spread is almost completely black, with white scratches that seem more to repel your eye then draw it towards the next page, forcing you to linger on Elsa and her robe. 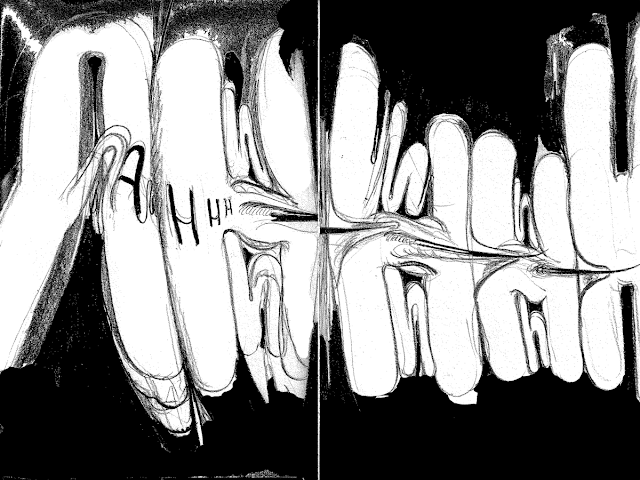 When you eventually get the nerve to flip the page the answer to the question of what Elsa and Kendrick hear is loudly declared. A two page spread of A’s and H’s overlapping and stepping over each other to gain further visibility. It’s deafening.


And for the remainder of the book Elsa seems to be trying to overcome that deafening noise, that defining blackness, the never ending winter of her psychological imprisonment. Words and phrases reappear, commingle with one another, questions asked fall away into the white nothingness of the blank page only to reappear a dozen pages later with a completely new meaning.

The most important of these phrase, which started out as a question but through its repetition and the actions of Elsa shifts in context to become a deceleration of intent: “Now’s The Winter When You Come Out.” 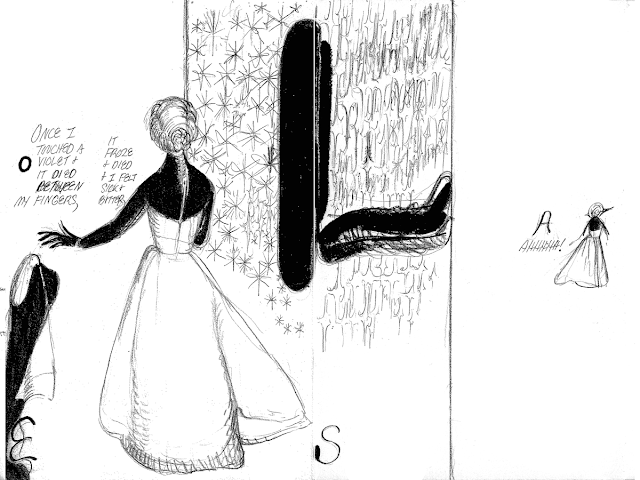 This shift comes when Elsa drops the heavy black robe she wore on the first page. The originally stationary Elsa begins to express motion on every page, with her hands, with her hair, with her clothes. Everything is in a state of movement the second that cloak hits the floor.


As a ice castle created by her hands jettisons upwards from the earth a few of the short phrases from the start of the story begin to reappear. But they are all washed away by the addition of a short phrase onto one of them. “I’m The Snow Princess… & That's Okay.”