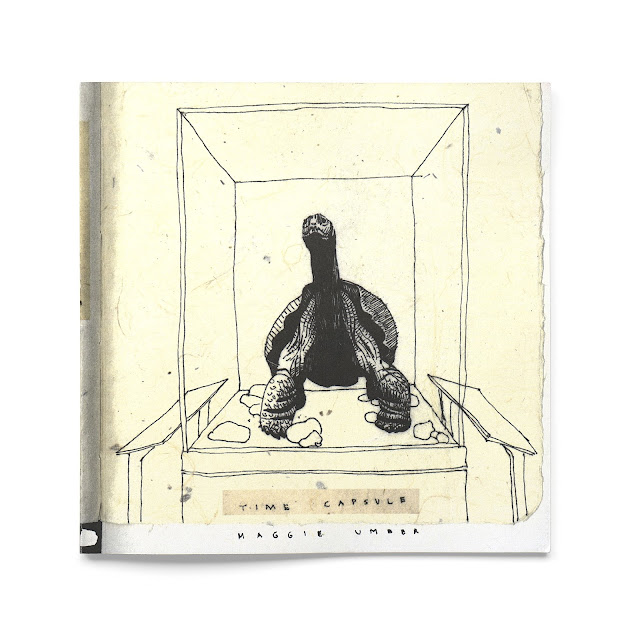 Time Capsules opens with a bang and ends with a note of caution. Between those pages the entire ecosystem of the planet is shown, in painfully humanistic vignettes of the mundanity of every creature's existence. Snapshots of moments that would be filler in a nature documentary but that, when collected and cataloged together, delve into the intimacy of those moments and the complexity of animalistic relationships we can never fully understand. It is a work created of small moments that coalesces into a big one. 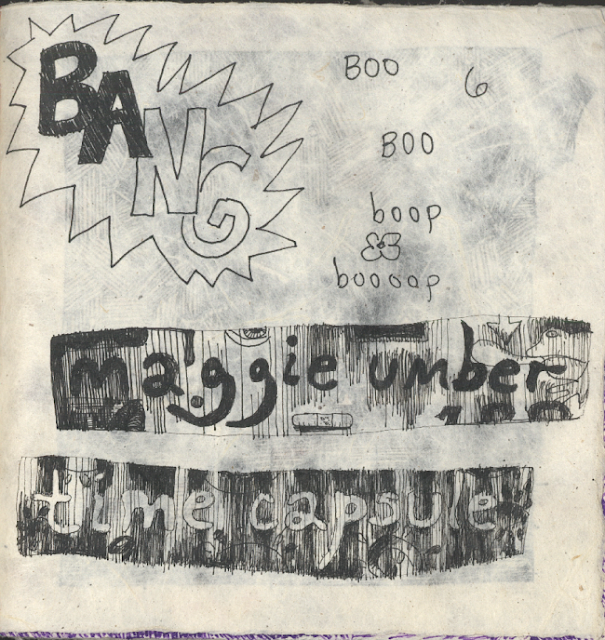 The paper, a replication of a battered and aged moleskine, makes you feel like you are stumbling on a biologists notebook from the field.

The final passage has the last two instances of “i” crossed out and replaced with “that”. After the previous fifty pages spent on exploring nature in its infinite intimacies, Umber is trying to pull the reader back from these singular moments. To not just think of each organism simply on the biological/micro scale, but rather, as the passage alludes to, on a macro/planetary scale. The more you identify with the images in Time Capsule the more these crossed out “i”’s should worry you. 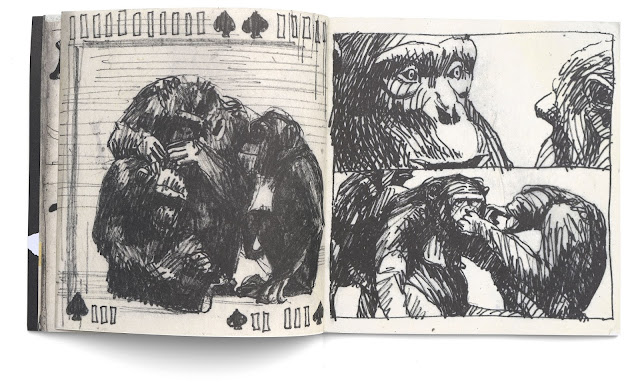 Which brings us back around again to ask a question about the collection's title, Time Capsule. Is this book a time capsule just being opened, or, more ominously, a capsule for future generations to look back upon and contemplate what has happened to the world as we as a species continue to march through the first man made extinction event.

Man killed the Dodo, is the rest of the planet next?


This is one of Koch’s more playful comics. It reminds me a bit of Seth’s stamp comics from Palookaville #21 in that it is a series of comics based on re-using the same imagery over and over again, but while Seth used that to create a straightforward narrative about the mundanity of life, Koch’s is utilizing the tone of each image to create a distinct feeling with each strip. So that the same four drawings can be reorganized countless ways too create a different series of tones, each playing off one another, to provoke a new feeling in the reader. 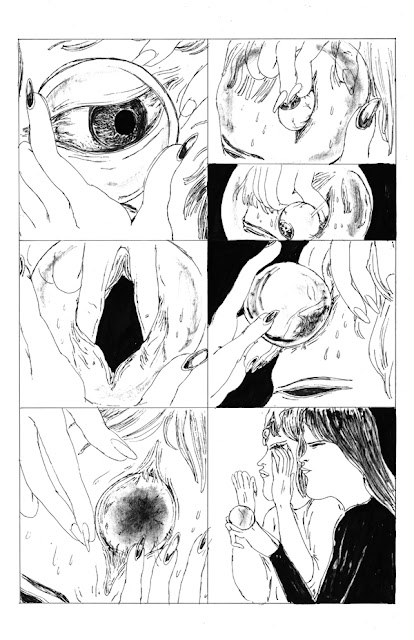 
Shawn: Okay, since I picked this I guess i’ll kick it off.


Lala Albert has had a big year, or at least as big a year as someone can have in art comics. Her newest book Janus from Breakdown Press was as close as any book got to being the “book of the show” at Comic Arts Brooklyn (CAB), and while I'm late to Albert’s party I’ve become mildly obsessed with tracking down her avaliable work.


Albert’s comics follow the recent trend toward body horror, but while much of that work feels cutsy, both in the art and story, Albert places the horror at the forefront, largely by setting her stories in an unfamiliar space and letting that seep into the things we recognize. Alien Invasion 3, a mini comic from 2013 collecting four short stories, is more liquid in its premise than you would think. Each story dissects the intent of an alien invasion, both the good and bad. And so we see stories that run the gamut of your typical alien crash site to explorations of Venus told through vacation slides.


So, Alec, is this your first interaction with an Albert comic? Because I’m wondering how you felt about this. I find that Albert and other body horror artists’ work tend to rise or fall based on how you feel emotionally after reading them, more than how well they work as a narrative piece. 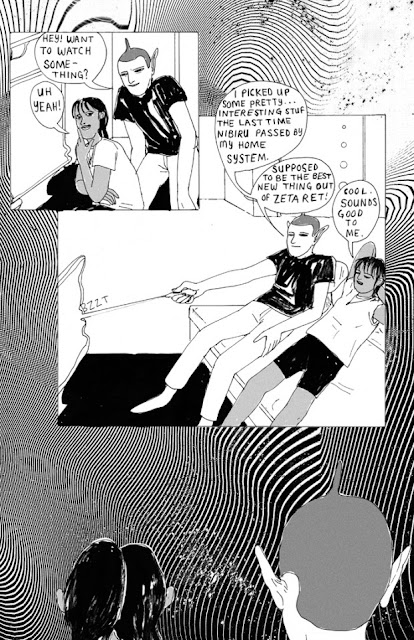 Alec: I felt very little after reading this, though I’m not necessarily sure there’s less to it because of that. Part of my reaction comes from simply being uninterested in it. These shorts supply good ideas, but they’re just ideas with little else to specify them, so there’s less to contemplate and review.


Another part of it, though, is that Albert is such an image maker her stories, at least in this case, don’t matter, so the reaction to the work is a bit removed. Instead of tangling with a narrative to compartmentalize and connect it to other things (which is human), the reading experience is more so a delivery mechanism for a few of those “panels,” or more likely paintings, so she can stick at least one in your mind as the takeaway, rather than an abstract feeling you’d normally attain from a good story.


That’s fairly alien in my experience reading comics. It’s not necessarily bad. It’s just something with a delayed response, though I’m assuming that’s why Albert is spoken of so frequently. It is an experiment, one that seems to almost want to reverse the practiced comics reading process (where you’d normally want to connect images for a larger effect, this is working in the opposite direction). I’m not entirely sold on its success, but it is a thought.


As for reading into the images, the fucking on the train was disgusting and heartfelt. That dude’s spiral, tree-nub dick thrusting its way up in there turned my stomach because I could suddenly smell rotting tree bark, and I felt guilty for ever fucking anybody. 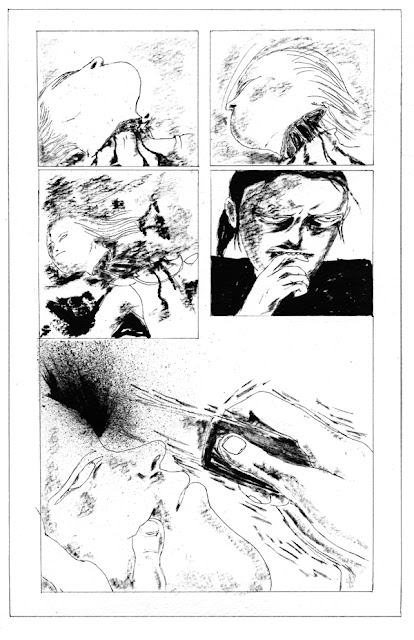 Shawn: Albert’s style has this oddness about it. Her figures are recognizable as human, but their proportions are off. Her faces tend to involve chins and foreheads that protrude outwards, creating an almost jellybean-like side profile. Her aliens barely look any different sans an antenna or warping mask. I think this goes towards that idea of distancing, though. They’re humans/non-humans at the same time.


The basic plot of “34 Starlight Local” is that two individuals meet on an interstellar train. The male character is identified explicitly as alien (Albert draws him with an antenna, though the rest of his body seems anatomically human), while the female passenger is just like us.


Over the course of the trip, the two begin to have sex with each other, shown in varying detail. With every act we see a growing intimacy between the two, as scenes of sex are intercut with panels of them sleeping in each other's arms, holding hands while looking out at the stars and  sharing coffee at breakfast. At the height of this intimacy the male asks, hesitantly, “hey do…i was thinking we’ve been hanging out for a while...do you want to have sex?”. This question takes both the reader and the female for surprise, since they already seem to be doing so. Though, the male’s definition of the act is something we learn by the comic’s conclusion, and it certainly echoes the idea of invasion.


“34 Starlight Local” could easily translate to a non-sci fi setting, but by placing it in space there's enough distance to remove any sense of titillation and instead focus on the strangeness of the act as well as the female character’s discomfort. The smell of rotting tree bark seems apt, but it could be anything that unsettles you.
Posted by Shawn Starr at 5:51 PM