Unleashed In The East: An Interview With Anna Haifisch 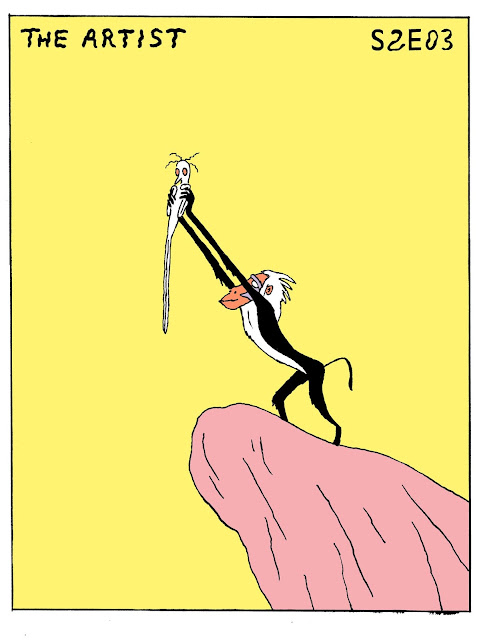 Anna Haifisch was born in Leipzig, East Germany, in 1986, three years before the fall of the Berlin Wall. Despite the Reunification of 1990, the former German Democratic Republic has not only lacked prosperity in the aftermath of a socialist market economy, but also an artistic vision. These shortcomings have led to a persistent climate of economic and artistic inequality that is comparable to current divisions in Germany's comics scene. Starting in the late 2000s as an initiative led by Berlin publishers Reprodukt and Avant, pushing the term 'graphic novel' at the expense of 'comics' has become an essential strategy to place their publications in mainstream media and bookstores and achieve accolades and moderate sales successes, as well as public and private funding. This aggressive grab for respectability and subsidization has resulted in a series of monotonously constructed, pseudo-literary comics, many of them dealing with the GDR or Nazi Germany, to the exclusion of almost everything else. Haifisch has managed to avoid these artistic pitfalls, despite growing up, studying illustration and running her studio in those parts of Germany still frequently considered to be deprived or left behind. Departing considerably from the one-note formula that dominates contemporary German comics, Haifisch places herself in the role of 'The Artist,' outside and above these conventions and therefore able to add invaluably to the slow change within the German comics scene towards a new vision. It is a vision that extends beyond the confines of German comics and beyond the boundaries of the German language. Haifisch's series for Vice magazine, 'The Artist,' is slated for a fall 2016 release by both French publisher Editions Misma and England-based Breakdown Press. It follows the joint French and German release of 'Von Spatz,' her first long-form comic, in 2015.

How in the world did an East German end up with those usually reluctant poseurs at Vice?

Alex Schubert, who draws the 'Blobby Boys,' recommended my work to Nick Gazin, Vice's art editor. As far as I know, it took him a while until Nick was convinced. Thank you, Alex! Thank you, Nick, for trusting me. I'm very thankful for that.

'The Artist' exists as a naked, disheveled white void across the series. Is this meant to show the impoverishment of the artist's life, as a commentary on the artistic ego, or do you just not like drawing clothes?

I wanted him to look malnourished and pale. And yes, he is a nameless white void. He is THE Artist, he is AN artist and he is (never forget where you're coming from) a bird.

I took notice of your use of Calimero in a strip you recently did with Nick Gazin for Vice. Is placing Calimero next to Robert Crumb in that strip a comment on the use of racist stereotypes, i.e. whitewashing?

What? I was four Coors in and Gazin was high. This comic is clearly about hats or something.

Is the beanie you're constantly wearing sort of a tribute to that cracked eggshell of Calimero? Are there other looks from comics-related protagonists you're sporting, like -uhm- Andy Capp? If not, could you name three of your favorite characters in comics?

Ooh, I love the symbol of the broken eggshell so much. If Calimero didn't already wear one, the Artist would. I like Woodstock, Owl and Widow Douglas so much.

And why would anybody label you as an 'art-comics darling'?

Ask yourself that, since you where the one calling me that.

Art school serves as a common punchline across American comics. Having experienced both American and German art scenes, is there a universality of experience, or are Americans just more open for mockery? Do you feel more connected to American cartoonists? Are there German cartoonists who had an influence on your work?

My biggest influence is James Turek, my best friend, my studio mate, my muse. He's American though. But besides James it's mostly German painters and my friends who're doing graphic design, not comics.

You have left your former publishing house in Germany, Rotopolpress, to work with Reprodukt now. The latter is known for pushing the term 'graphic novel' to get its products into bookstores and receive favorable reviews from the mainstream press. By doing so, Reprodukt tries to create a new, 'literary' reception which appears to be quite different from the usual fandom. Any thoughts on that?

I still don't know what a graphic novel is, but I appreciate anything that Reprodukt does to reach out for new audiences apart from sweaty perverts with awful taste. The depiction of the typical German comic reader still keeps me away from saying 'Ich zeichne Comics' ('I draw comics') in public. It's fucking embarrassing.

I want my work to be in art galleries, feuilletons and libraries - anywhere - just far away from these people. I'd call it 'graphic novel' or whatever [else it takes].

Shout out to Rotopol and Reprodukt! Fuck the mainstream! I don't care.

Do other cartoonists' characters (Burkholder's Sexy Frog, Schubert's Blobby Boys) only exist in The Artist's drug addled mind, or do they all just really like hanging out at the disco? Probably in the shower?

Oh yeah, they would be great in the shower together or playing cricket. Stuff good friends would do. They can all come over to my house. It would be so wonderful. 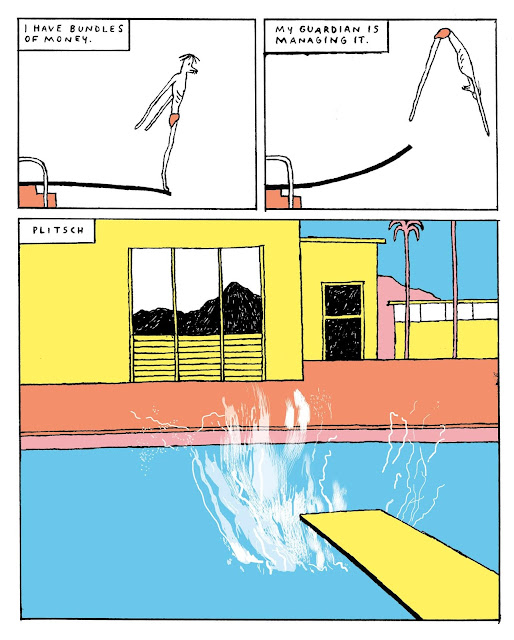 Did you intend to become rich by co-founding the Millionaire Club? If so, why did you publish stuff by Andy Burkholder or G.W. Duncanson within your Tiny Masters series?

We are millionaires! Rich in visions, ca$hing in on red hats.

Duncanson's tumblr isn't named 'cash money cartoons' for nothing and Andy is the mogul behind ITDN group and Oireau. They're gems and we are visionaries.

Are cobras The Artist's sunflower paintings, or just a reminder to not put on pants?

Everything the Artist creates is a placeholder for contemporary art. No meaning but this. It's my mission for him and his burden.

Are your lines just erratic because of your hunger for success? C'mon, no one's buying the stuff about paying homage to Saul Steinberg.

But the reason for my shaky lines is my nervous and impatient temper. 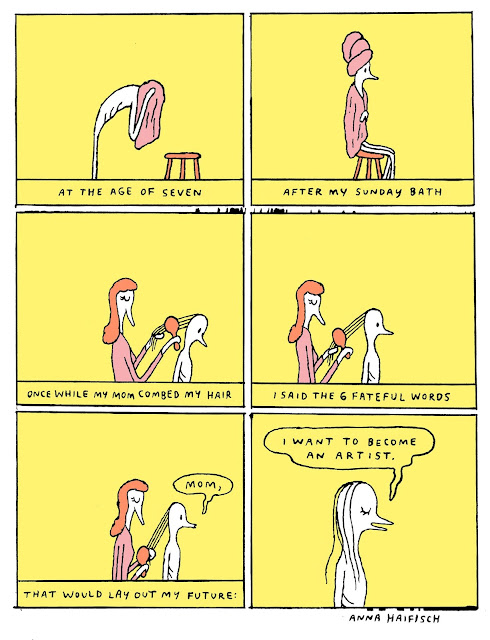 Patrick Kyle should be the narrator. He has a beautiful deep voice.

The religious or mythological tone is my favorite part of writing 'The Artist.' It's pure honesty. When I talk about artists as saviors and saints, I really mean it (and every other word, too). It's me giving a speech. I deeply believe that art is mankind's last straw before it sinks into brutality and chaos. If we let go of art, the world is lost and we will all die not soon after.

Alright then, please name three things you like about Blaise Larmee's Three Books. Don't use the words Tawrāt, Zabūr and ʾInjīl‎ while trying to do it. Furthermore, please explain making use of him as a doctor in “The Artist“.

I really like Blaise's sense of design. The layout and the book itself is beautiful. I like the pretentiousness of his alter egos, the exaggeration behind each of the three books. It succeeded in convincing me that Blaise is a thoughtful prince of comics.

Blaise is comics' family doctor. He is going to heal comics from monotony and will eventually be the naked Icarus who's leading the medium towards the sun where it will burn down to the core. A sigh of relief will shake the forests and deserts and we can all move on to bigger things. That's what the cameo meant. 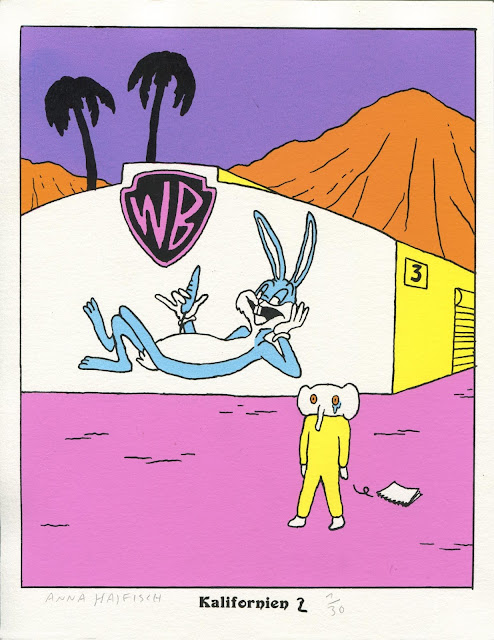 Is your rehab playlet 'Von Spatz,' which features Walt Disney at a breaking point, color-coded to reference pink flamingos? If so, in a Michael Mann or in a John Waters manner? Are you disneyfied? Ub Iwerks or Floyd Gottfredson?

No, not at all. I don't watch a lot of movies. I wouldn't reference any. My colors are coming from my former days as a screen printer.

I am disneyfied like everybody else. Every child grew up with Disney's characters. He's the most famous artist on this planet and therefore I admire him. There's something about early photographs of the first Disney Studios… they're really touching. Walt and his friends are looking so happily into the camera. Full of hope and not afraid.

As someone who hates Nancy and Sluggo, do you see any relationship between the beats of a four-panel strip and a four-page comic? Are repetition and structure important aspects of comedy?

I think repetition is essential for comics. I don't know how many times I'm drawing the same thing. From panel to panel, making sure the reader can follow my thoughts. This turns drawing comics into a drag sometimes. You can't be lazy, there are no shortcuts to repetition. Right now I can't make a lot of sense of that, sorry. You better read Andy Burkholder's comics for more information on repetition.

Final music-related and blunt question: Do you think Blaise Larmee and DJ Escrow are the same person?

I like Blaise and Dean Blunt. I don’t know who DJ Escrow is. 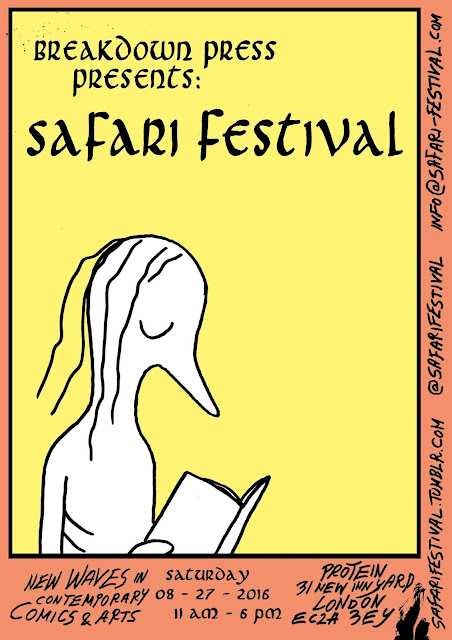