I'm not sure how many people do this, but whenever I read Silver Age comics I tend to skip 90% of the dialogue. I don't read issues of Ditko's Spider man to have Stan Lee tell me everything that's happening. Ditko accomplishes that by himself. The overwrought nature of Lee's scripts likely stems from his need to explain the action to his adolescent audience. These books were made for kids mind you, and the jokey nature of the dialogue add to that notion.
While the caption boxes and thought balloons that housed so many of Lee's blocks of text, have largely been abandoned, following the advent of "widescreen" comics and the influx of "mature" readers.The joke-y nature of Lee's dialogue is still readily used. In a series where the main protagonists girlfriend has her neck snapped, after being thrown off a bridge, Lee's "jokes" seem out of place. Uncomfortably so. And yet this "stylistic" flourish still exists. The introduction of moral relativism into comics seems to be predicated on the removal of its campish nature. In a dystopian future, featuring a fascistic Batman, Shark Repellant doesn't have a place. I am not advocating the removal of humor from comics as a whole, but I doubt it would be a stretch to think that Watchman's literary reception would have been dampened if it had a two page sequence were Night Owl had a bought of diarrhea. Injecting juvenile humor into a book that deals with "worldly" subjects like life and death undermines the whole process. Yet the practice is still common. 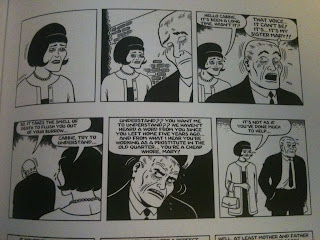 Now don't get me wrong, camp and satire have their place, but in books sold under PR snippets like "gritty" "realistic" "street level" all they accomplish is undermining the work. Cabbie, recently reprinted by Fantagraphics, takes the entire premise of the "streets" and subverts it. Dark and satirical at every point.

The difference between The Cabbie and the majority of the American Mainstreams output is that the Cabbie never strives for "realism".  An avenging cab driver with a whore for a sister, running up against the mob and a family of hoodlums, all under the direction of Saint Christopher, sounds like a ridiculous premise, which it is. And luckily Marti understands the failings of the Pulp genre enough to mock them. And that's where its humor is derived. 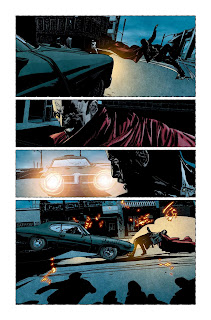 Maleev utilizes a "realist" style in Moon Knight, while not as stiff and heavily photo-reference as Scarlett, it doesn't capture the loose cartooning style of his early work on Daredevil. Its an amalgamation of the two, with a heavier emphasis on photo-realism. Creating pages which feature both static and frenetic panels. A odd combination indicative of this series. 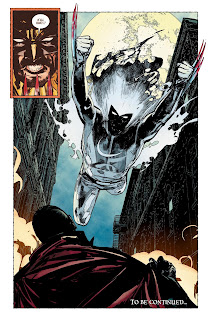 Bendis's script is bipolar. This issue features a night time rooftop battle which spills into the streets of LA, and culminates in the death of Echo (Moon Knights "girlfriend"). All of these elements are put in place to amp up the issues realism, especially when rendered by Maleev. Whenever Moon Knights split personalities are involved (both when they "take over" or are simple being mentioned)the realism Bendis and Maleev try to build goes haywire. It reads like a Bendis Avenger's script bleeding over into Moon Knight. Which makes the choice of split personalities especially alarming due to Bendis's long tenure on The Avengers (and that series distinct tone). His choices seem to be him purposely shooting himself in the foot. 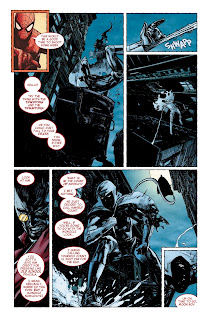 
I understand your friends think your funny, but theirs a reason Citizen Kane doesn't have any dick jokes.
CITATIONS/FOOTNOTES/OTHER
Moon Knight #9
Written by: Brian Michael Bendis
Art by: Alex Maleev
Colors by: Matt Hollingsworth
Lettering by: Cory Petit
Publisher by: Marvel Comics
Posted by Shawn Starr at 5:58 AM