Hey, I’m a child of divorce, gimme a break! 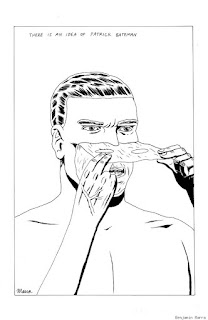 “There is a moment of sheer panic when I realize that Paul’s apartment overlooks the park… and is obviously more expensive than mine.”


Ben Marra, with the possible exception of Michael Deforge, is the best artist in alt-comics at the moment. Marra’s work operates both as a crude 22-page exercise in depicting violence and obscenity and as an examination of humanity. He’s kind of like an early Williams S. Burroughs, only with less heroin and more spine breaking. Recently, Floating World Comics reprinted his adaptation of the film American Psycho as an over sized newspaper for a mere five dollars.

Marra avoids doing a straight adaptation of American Psycho, instead selecting iconic images from the story and illustrating them with little to no dialogue. Removing the connective tissue of the narrative, Marra relies on the readers familiarity with the work (particularly the film), so that he can use his artwork and the format to explore the psyche of Bateman, without getting bogged down in the details of the narrative.

Marra renders each image with a razor straight line, creating a sense of homogeneity and motionlessness in each scene. It’s uncharacteristic for him – windows are squared, bookcases are straight, characters are stiff, and the explosions are contained. This creates a uncomfortable stillness to the book, representative of Bateman’s psychosis. Marra, though, subverts Bateman’s characteristic narcissism, not through his art (which acts as a representation of Bateman), but by reproducing the comic on newsprint. The cheap and flimsy nature of newsprint can immediately be scene as an attack on the character’s aesthetic values, and Marra uses it to distort Bateman’s character by exploiting the paper stock’s shortcomings.

The thinness of newsprint allows images to be superimposed. Visuals on the back of a page become visible on the front of a page, and vice versa. This layering effect adds background detail to the image being viewed, pocking wholes in the illustrations’ perceived perfection as lines mesh, figures distort and characters begin to move.

This technique is best illustrated on the cover page where Bateman stands smirking at the reader, wearing a fitted suite with perfectly kept hair holding a bloody knife in front of an apartment complex. The cleanness that Bateman exudes is shattered as the image on the back of the page begins to bleed onto the cover, adding splashes of blood across Bateman’s face and the apartment complex he’s exiting, creating the image of a messy and disoriented killer. Adding these details directly to the primary image would disrupt the pages “cleanness” and remove Bateman’s (perceived) control over the book, but by using the paper stock to create these ghost images Marra is able to create a layered effect that gives the reader a glimpse into Bateman’s psyche and his loss of control, without being explicit.

The flimsiness of the paper also causes it to become easily damaged. Every crease and bend creates an added level of distortion to the image; creating additional cracks in Bateman’s perfect world (comic); warping his vision into reality, not fantasy. It even arrives folded up like the morning paper from Leave it to Beaver, its delivered as the embodiment of the american dream (like Bateman) and deteriates into the american nightmate that is Patrick Bateman; and maybe once the book is falling apart and torn to shreds, we may finally understand the full extent of Bateman’s insanity.
Posted by Shawn Starr at 4:28 PM