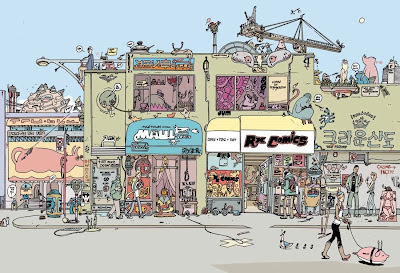 Every time I read a Brandon Graham comic all I want to do is get on the subway, put Blueprint (KRS-One not Jay-Z) on repeat and read a stack of quarter bin comics. This collection is no different.


Escalator collects Brandon Graham's early short stories, along with some nice commentary on each stories genesis. What I always liked about these types of collections is seeing how a creator got from point A to point B (or C, D, E, F, G...). Looking at Adrian Tomine's 32 Stories collection and seeing him change so dramatically over just a few issues of Optic Nerve is amazing, especially knowing where he ultimately ended up. Grahams progression isn't as dramatic as Tomine's though, Grahams style is firmly cemented in these early stories, just less refined than it is today. His panels become busy at points, overly angular (look at his self-depiction in I Owe You compared to now) and his inking is looser, but his basic style is there.

Sugarless Candy is the first story that feels like a Graham comic, its just a guy talking to his girlfriend and looking over the cityscape before she gets on a plane for home. Graham's ability to forge an immediate connect between his characters and the reader is astonishing, even in his creative infancy within three panels he makes you identify with each character in the story in a way i still don't connect with any "mainstream" creation; curled feet peeking out of a blanket, sock puppets, old sugar free candy, Indian headdress from old memories box. These little things craft a  connection that you buy wholeheartedly in mere panels, where others take tomes.

There's also some nice forays into auto-bio with True Crime and I Owe You, along with a funny two pager about starring at girls asses when they walk by.

The final story collected is an early installment of Multiple Warheads which is the most accomplished (and "newest") entry in the collection. His art and writing are fully formed in this short, his hyper-detailed and yet open panels , his proclivity for puns, small side-character moments ("The ladies love a field hat") and his need to draw pretty girls with there asses sticking out are all on display here. I'm genuinely excited to see him continue this strip with Image later this year.


From the first page of Escalator to the last, you see Graham grow as an artist and storyteller, infusing his work with elements of Science Fiction, Autobiography, absurdism along with playing around with his story structure and subverting reader expectations. When you put down Escalator its easy to see how he went from this, to King City. 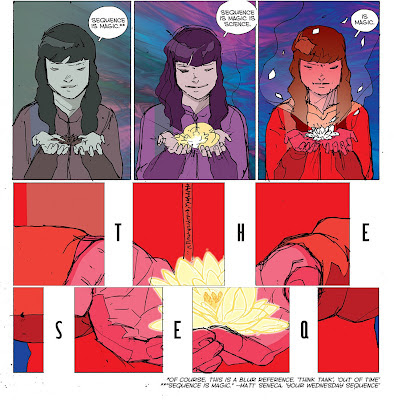 
Grant Morrison's Bat-Epic opened with Batman shooting the Joker in the face, a rejection of the chaos that the Joker represented, along with the chaos of his previous comics. Morrison's initial Batman run is a story of structure and stability, wheels within wheels. Wild Children kicks off by shooting Jim Gordan in the fucking face. A direct act of rejection towards Morrison's latter day work as a corporate cog. Wild Children is a shift to the Morison of the early nineties, retro-fitted for the current zestiest. A post-Morrison, per-Morrison, comic for the Facebook Generation.

Unlike The Invisibles though, which existed in a world of Transgender Discotecha’s, Philip K Dick novels and ecstasy, Wild Children exists in the internet era. Mass communication ("For fucks sake. Televised-Youtubed-Casualties") widespread and accepted forms of fetishism ("Want me to Piss on you some more") internet criticism (" 'Sequence is Magic' – Matt Seneca") and self referential entertainment ("The Space-Time Worms in Donnie Darko, the All Now from The Invisibles, the Five Dimensional beings in Neonomicon") rule the day, and are therefore key components to Wild Children, and pop culture at large. When Morrison wrote Kill Your Boyfriend and St. Swithin's Day he was talking about youthful rebellion in the age of the post-60's protest movements, Wild Children approaches them in the post-internet digital revolution, the Anonymous movement, hacktivism, Occupy, Wikileaks.

Its a comic about comics, based on comics about comics, that have been deconstructed for a decade over internet message boards until they became something completely different. I can see readers rolling their eyes at every page, in a couple months i may too, but for right now i am fascinated by the balls behind this thing. It's both new and old, and dying to be ripped apart on 4chan.

It's a mission statement of whats next, sent from the past to fuck up the present.


There's nothing particularly good or bad about this comic, the script has some bounce to it in the beginning, but that dies a slow cancerous death and descends into exposition and melodrama after page five. The art seems out of place for the most part, its in an inky Rafael Albuquerque style that doesn't work with the script very well. That's not to say it's not good, it's just out of place.


The whole time reading this i was thinking how nice this comic would be if Jamie McKelvie had drawn it and they just cut out the second half and just talked about britpop while at a club full of cute girls. That would have been nice.


What i am getting at is Jamie McKelvie needs to draw more comics about cute girls dancing in clubs.


God i miss Phonogram, when's that coming back? Soon right?


This was terrible, but i do want a comic about WW2 Black Panther fighting Japaneses soldiers in a white suit drawn by David Aja now. 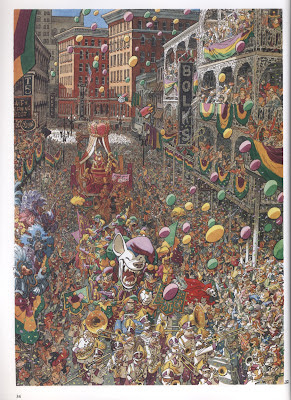 The only real reason to pick up Blacksad is for the art, and even more specifically for the coloring. Juanjo Guarnido linework is solid with an eye for detail, but his colors are vibrant and lush. That may be why this collection devotes over thirty pages of extra's to his coloring process. His understanding of lighting is probably his most astonishing skill, being able to differentiate between a neon drenched street and a room lit only by candle light, or the shading produced by a tree's canopy, it's awe inspiring.

Juan Diaz Canales scripts are fine, they don't set the world on fire and tend to delve into genre tropes far too often. There are some nice period references and his research shows in the text, but it never really coalesces into something more. Noir and crime stories are always difficult to pull off from a writing point of view, The Third Man isn't remembered for its script but for its atmosphere, but, ultimately, theres just something missing in Canales's script.