Comics are a synthesis of words and images. This synthesis though has always been a lopsided endeavor. At least intellectually. As a visual medium comic must place an emphasis on the image over the words. A natural outgrowth of this is that the words placed within a comics panel should not repeat the information given in the panel, but instead relay information independent of the artwork. To borrow a phrase from film (another medium of synthesis, this time of image and sound) comics is a show don’t tell medium.


Sarah Ferrick’s approach to comics is unique, not in that she subverts this idea, what is said and what is depicted are wholly different, but that the words themselves are turned into the primary art object being depicted. The images inside the panels are merely window dressing for the words. By turning the words themselves into an extension of the artwork each letter she chooses, and how she chooses to draw them, becomes a crucial plot point to the story being told.


There are seven words total in this comic. Almost all repeated at least once. Some right after themselves. Ferrick choose each word carefully, both for their meaning, but also for how strong and weak each word is, in the abstract and in relation to each other. 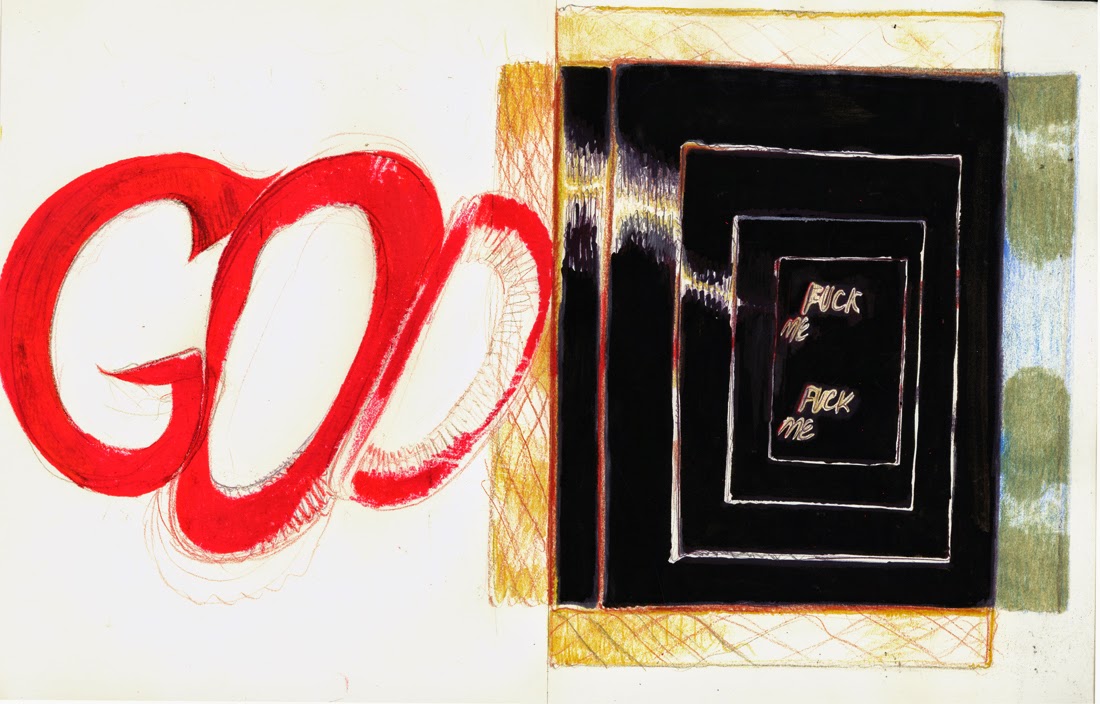 “GOD” echo’s throughout this comic, taking up almost the entire left half of the page first. Each letter of “GOD” is depicted with a tightness, although the rounder elements of O and D are given a bit of dimensionality around their corners, the actual pencil lines that make up each letter are carefully constructed to make the image of the word “GOD” appear orderly. The red coloring, which is used to highlight each letter, is also tightly packed within the linework of each letter. All this attention gives a great importance to the word “GOD” within the image, but the sound that is produced in the readers mind is not a yell or a scream, but rather a passive use of the word. Evoking the meaning behind the word, but not the brimstone.


To the immediate right of “GOD” is a series of black boxes drawn within each other. On the top left corner of each box Ferrick paints a small band of yellow and white to give them the sheen of light and an added depth of space; creating the visual affect of a hallway of sorts. At the end of this series of boxes we see the words “FUCK ME/FUCK ME” etched into the final black box in the same shade of yellow as the highlights. Due to the words perceived distance from the reader, and the cleanness of the lines that make them up, they seem almost quite, like faint whispers.


Ferrick's use of “FUCK ME” and “GOD” on the first page is interesting, because everything involved in their depiction has a silencing effect. For such strong words they don’t feel that way. The control of the letters, along with the deafening nature of her blacks, make the words barely register so that even the vulgarity of the fuck and the holiness of god are muted; creating at most a rise in the reader but not a feeling. 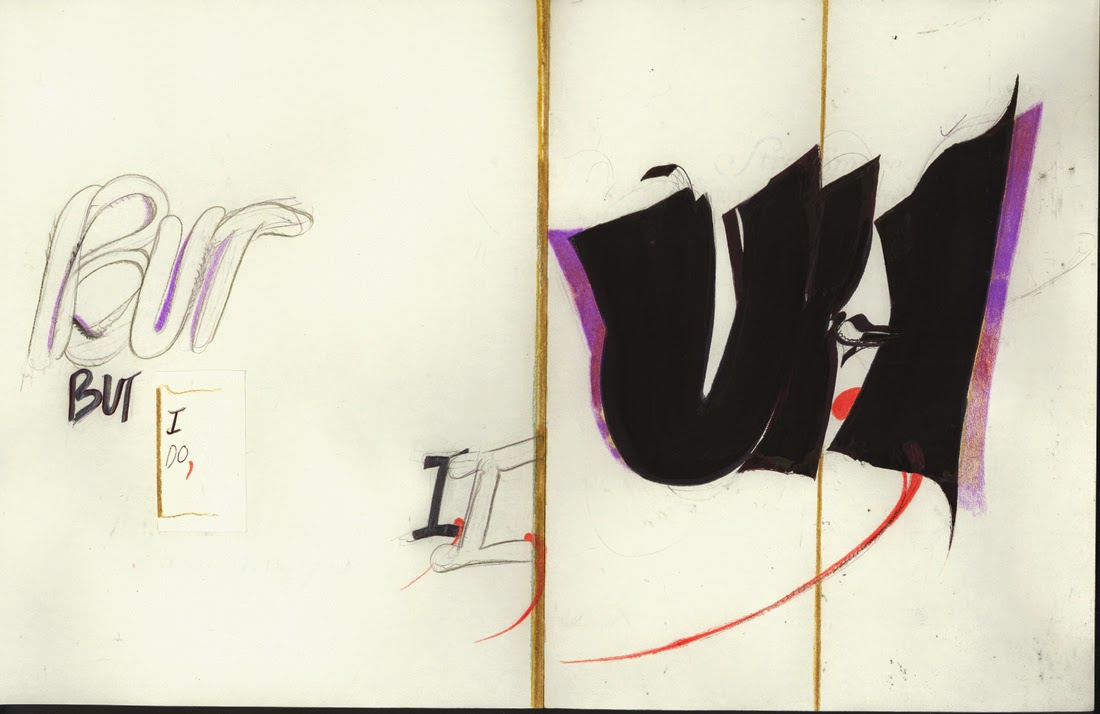 The next page is a response to the words spoken in the first, but the calmness of the first page is now a contrived hesitance. Beginning with a big fat “BUT” which seems to be in the process of overlapping within itself, turning each bend of the B into another corner to hide within. Unlike “GOD” “BUT” is given no primary coloring, leaving it to exist in its own translucence, making each of its twists and turns all the less effective. Every line can be seen by the reader because it has nothing to hide behind. Below it “BUT” is repeated once again, but in its stark black it resembles more a shadow of its first appearance than a new iteration.


To the immediate right of “BUT” we see Ferrick's use of commas to create a sense of stuttering for the reader. Again one of the “I('s)” is drawn with a deep black while the other is in a looser and plumper style, creating the resemblance of an echo between each other. Additionally we see the use of a comma here which, unlike a period that would have caused a stop in the readers mind, causes the reader to stammer over themselves as they read each letter in succession.


Taking up the entire right half of the second page is a giant “UH” drawn in almost complete black, sans the mild application of purple to create a bit of dimensionality. The “UH” resembles the “GOD” found on page one in its size, but the strength represented by “GOD” is devoid here. By depicting “UH” in a similar manner we see explicitly how quivering the response to the first page is, the “UH” reinforces the “BUTS[’s]” and “I[’s]” on the left side of the page, but unlike “GOD” which gives strength to the “FUCK ME/FUCK ME” this “UH” reinforces how weak they are, turning the whispers they represent into pure silence as “UH” drones on. 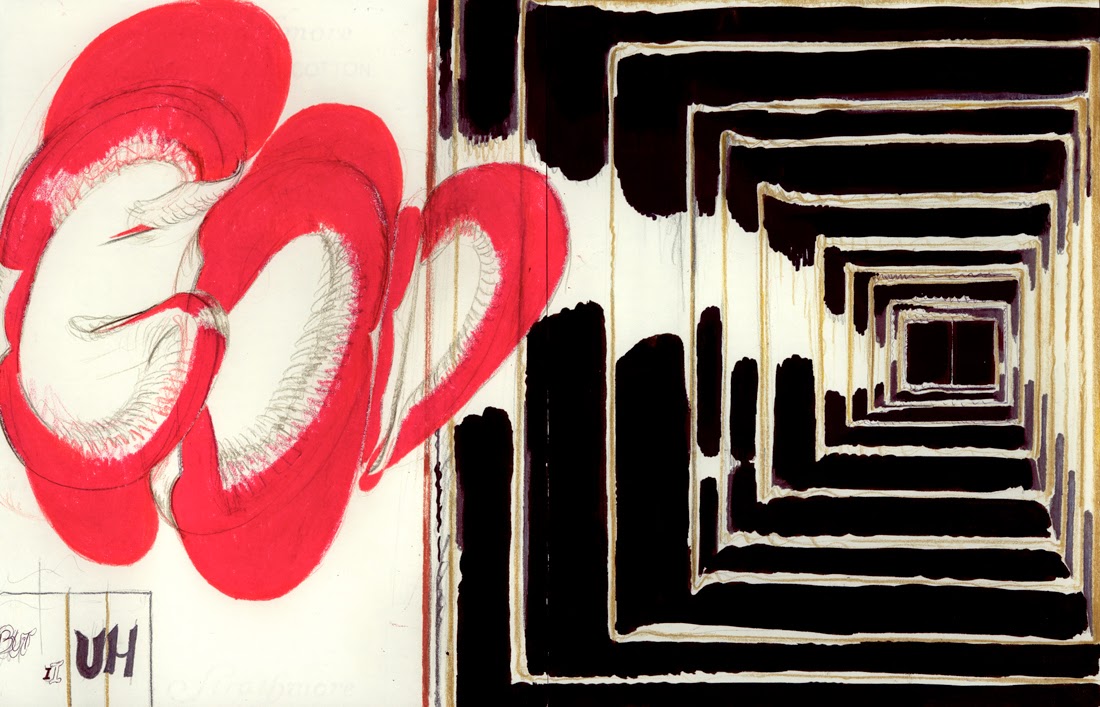 On the final page “GOD” is repeated once again. Ferrick’s representation though is less controlled, more reminiscent of the anger found in the words of the old testament god, rather than the new. Each letter is drawn looser, with an added depth in linework so that it looks like each letter is falling backwards in on itself. Where the red coloring on page one was exact, here it looks as if it was almost glopped on and smeared around the linework in circular motions only to be violently dashed off when Ferrick came to a straight line. Its utterance now has an anger to it.


The small corridor that once housed a tight and quickly repeated “FUCK ME/FUCK ME” has also been blown up in size and is depicted in a less controlled manner. The highlights of yellow are now erratic splotches of no color. Due to the lengthening of the hallway the echo effect of GOD feels infinitely deeper now; as it reverberates down the long hallway of nothingness it seems like it never ends. The whisper of “FUCK ME/FUCK ME” seems long gone.


In the bottom left corner of the page, almost hiding from this noise and anger is a small penciled in box with the words“But. I, I, UH” inside. It continues to feel like the wrong answer.