Is It A Tragedy Or A Comedy 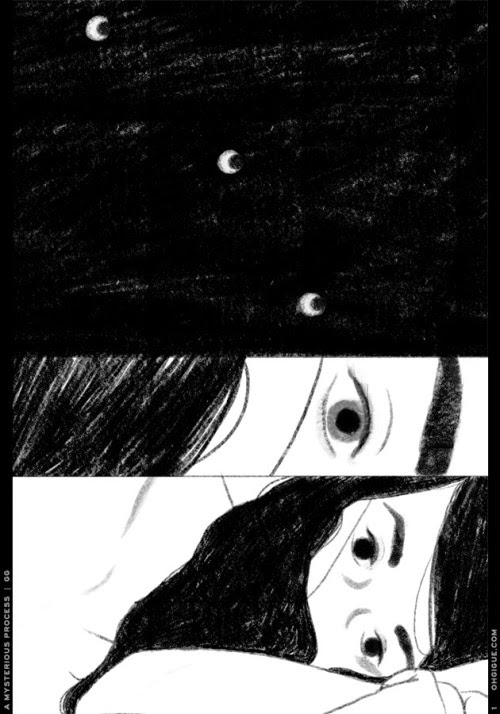 A Mysterious Process opens with five horizontal panels. The first three show the trajectory of a crescent moon over time. The forth an eye and eyebrow on the right side and a swath of black lines on the left. It isn’t clear what these lines represent until the next, and final panel of the page, where it is revealed to be the main characters hair.


GG is in a constant state of hiding and revealing during A Mysterious Process. Jean Luc Godard spoke in an interview with Cahiers Du Cinema that a film’s theme should not take more than twenty seconds to describe. GG seems to be trying to turn it out in five panels. 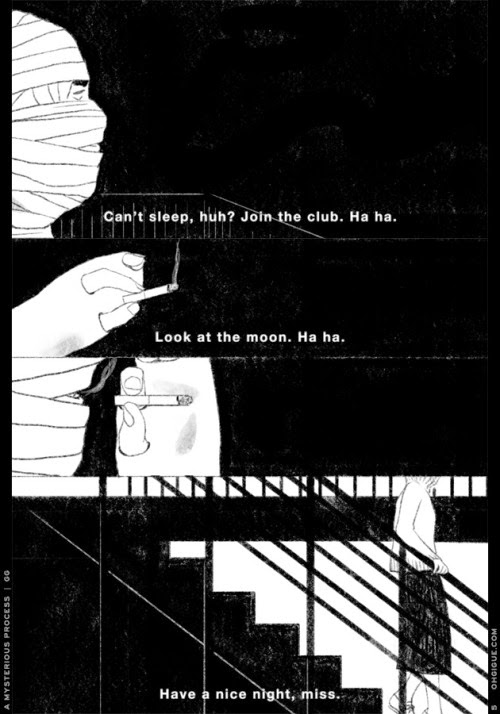 Throughout A Mysterious Process you see disfigured people. Individuals that are missing noses, eyes and mouths. All of these disfigurements are wrapped in medical goss. The disfigurements shown quietly play into each characters lives as ironic jokes about their existence. The moviegoer who has no eyes to view the film he is seeing. The barber with no mouth to talk to his clients. (Delillo must be weeping at the very concept!) The popcorn vendor who can not smell the popcorn she is selling. But what theses jokes are telling on the surface, as a joke, is not what they are ultimately telling the reader. Each layer of goss wrapping shows us that each of these figures have come to live with their conditions. The goss wrap is as much a medical treatment as it is an acknowledgement of each individual's condition and their willingness to overcome it. To live with it. Roger Ebert was a writer who could no longer talk, but that never meant anything to him. He moved past it. He lived past it. He died past it.
The main character in A Mysterious Process shows no such wrappings. Instead, as in the first pages forth panel, her face is covered at all times by her hair. It is long and wild and somehow both covers only a small portions of her body and all of it simultaneously. The earlier work of Heather Benjamin exists within a similar line of thought. Both artists use hair as a form of masking the individual, but while Benjamin eventually shifted her hairs intricateness into something to highlight her figures, GG chooses to cut it all off. To strip the features bare. To confront the very concept of self that they are dealing with head on and to destroy the very idea of it. 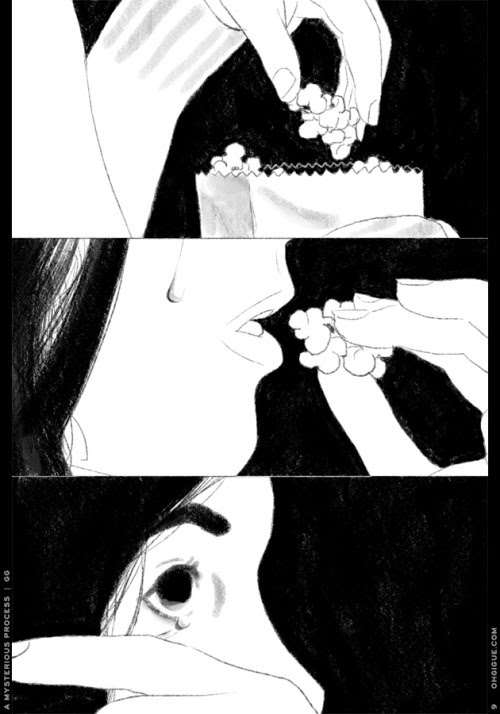 This decision is not easy. GG chooses not to give voice to these internal feelings narratively. Instead allowing each composition and line to bare the brunt of the psychoanalyzing. This is most directly shown during a scene where the main character sits in a run down theater and begins to cry as she watches the films lead, a female who vaguely resembles her, getting her hair cut. The sequence is reminiscent of Godard’s Vivre Sa Vie in which Nana (Anna Karina) sits in a movie theater, in a near total close up shot, and cries uncontrollably during a showing of The Passion of Joan the Arc. In A Mysterious Process the protagonist is not shown in such extreme of a close up, but rather only in profile.The difference between these two compositions is vital to the understanding of each individual scene, and also how their framers wish the reader/viewer to relate to each characters emotions at the time. 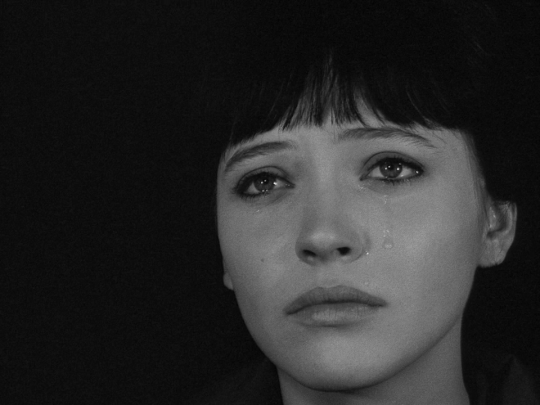 (That both scenes take place in a movie theater also furthers this identification, there is no source of light except for the light given off by the screen in front of them, this produces an entirely black environment sans their faces.)
The magic of the frontal shot is that it forces the viewer to identify directly with the subject, as they encapsulate ones entire sight line. This forces you to address the figure directly for everything they are, both emotionally and spiritually. By shifting the camera to the figures right or left, so that they are in profile, the framer creates an added layer of distance between the viewer and the character. Nana and the protagonist of A Mysterious Process cry all the same, but you don’t see the glistening of Nana’s eyes, the trembling of her lips, in our protagonists eyes, but rather only the trail of her single tear. While the distinction is miniscule on the surface, the feeling you exit both scenes with is monumentally different. One of identification and one of distancing.

GG’s continuing love of puns is again present in A Mysterious Process. The barbers shop she goes too to rid herself of her mask, in the form of hair, is aptly named “hair today, gone tomorrow”. This punnery creates an odd playfulness across GG’s work. Similar to Godard’s deployment of slapstick in Pierrot le Fou, GG’s puns break up some of the heavier tones being dealt with, without undercutting the works seriousness. A small joke here and there to bring a smirk of levity to the whole endeavor. 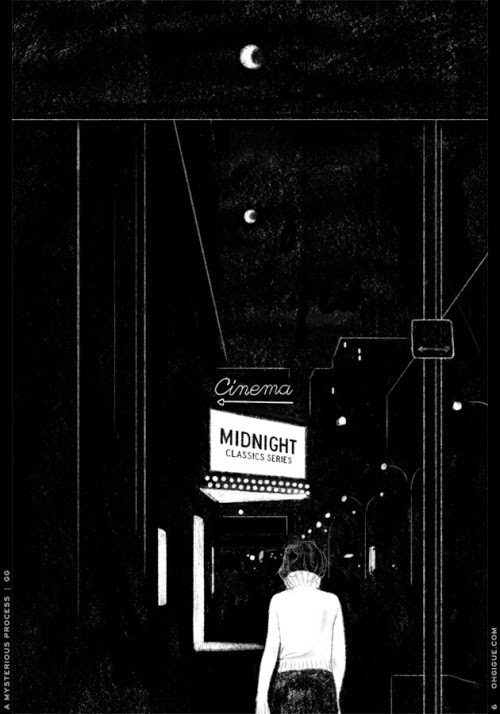 You may have noticed i referenced several films while describing this comic.(All by Godard. That isn’t unintentional. Most of all because i've spent the last 3months watching a lot of Godard films, and the last two weeks reading Godard on Godard, but that's not all of it.) A Mysterious Process seems much more cinematic at its core than many comics i have come across. The wide shot is of course present, but it is deeper than that. The lettering, a fuzzy white typeset that is always placed on the center bottom of the panel is clearly evoking the subtitles of older foreign films. Dropping the background focus so that only the foreground figures are seen in any detail. The coloring, a mixture of blown out whites and stark blacks, create the feeling of distressed film and slight shoddiness that by attitude and virtuosity alone leapfrog any detriments that could be associated with it.


GG’s work center around loss and the catharsis that loss leads to. While these moments of extremeness don’t always feel earned, endings for endings sake, the emotion behind them pushes them past their limitations as narrative moments. They feel right at the moment and that seems to be the primary goal GG is striving for, a feeling.  A single feeling. And what more can you really ask for in any given work.