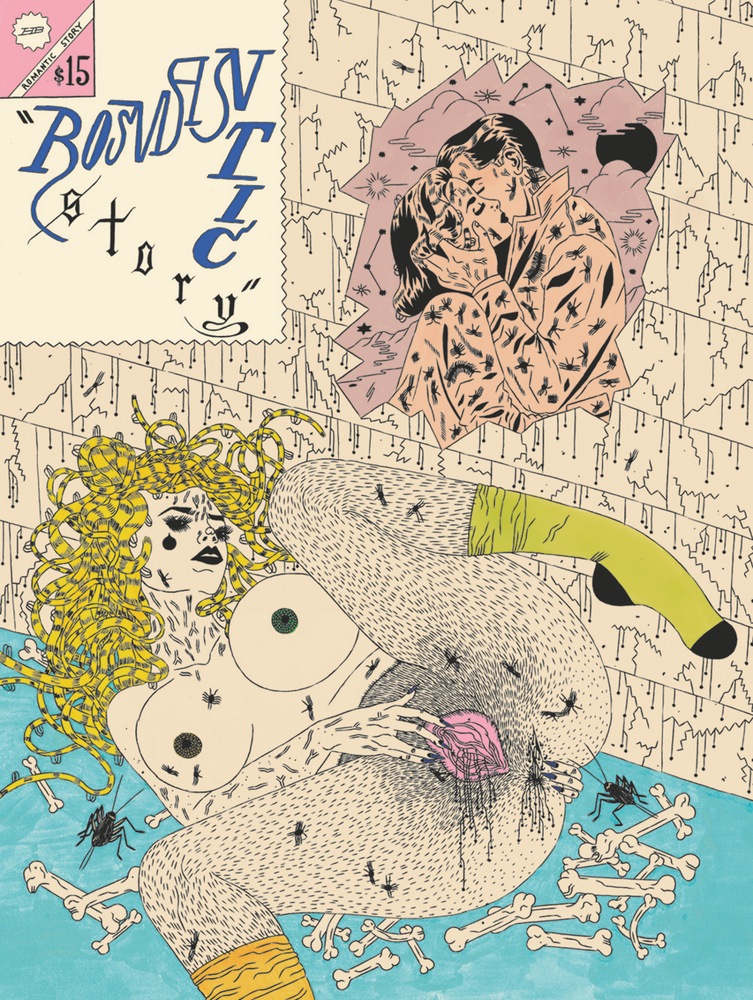 
When you find old romance comics the covers, typically printed on newsprint or some other low grade paper, tend to be beaten up and falling apart in a vendor's quarter bin. The imagery across the board is that of idealized love, but the fatigue of time has battered the surface of these covers away to reveal the fetishism of love that lies beneath.


Romance Story though has a gloss cover, it’s smooth and built to last in the modern world. The cover harkens back to the romance comics created by Kirby and Simon, but cuts directly to the point of their narrative underbelly, reveling in the inhibited nature of their origins.


Sad Sex was confused and raw, a book made by someone fighting with themselves. Exorcise was a series of drawings meant to reclaim the personal identity of one's sexuality and explore what that means. And now we have Romance Story, a collection of 24 drawings that no longer wishes to look inwards at one's own struggles, but rather place those self-discovered truths against those of nostalgia.


The myth created in the romance comics of the 1950’s, an idealization of love created by the post war middle class, is set in contrast to Benjamin's own mythology. Her figures appear no longer as just woman, but as half woman / half horses; Mythological creatures in their own right. These figures are depicted peaking through the small windows of brick buildings into the lives of these idealized 50’s lovers and surrounded by the constellations, moons, suns and symbols of several millennia of human existence.


By flanking these scenes in such deep mythology Benjamin is placing the images within the vast context of history, making the sequence taking place in their window frames seem all the more brief (and untrue) in comparison to the vast and ever expanding narrative taking place outside of it.