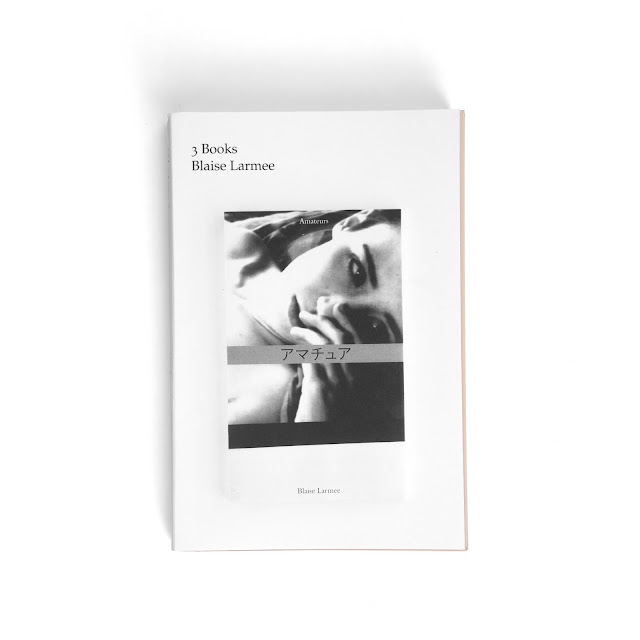 Blaise Larmee is a cartoonist.The most recent collection of his work, 3 Books, was published by 2dcloud.

You became the marketing director of 2dcloud this year. What are your thoughts on marketing, both as a marketer and as someone being marketed to?


Walking around downtown Toronto I was struck by the amount of signage that in a comparable American city would have been legible, with Patagonia meaning one thing and American Apparel meaning another, but here replaced with Canadian brands I'd never heard of. There is a typography underlying language that, once the meaning becomes monolithic, comes to the fore as characteristic of expression. Most of the typography is also monolithic but at least this arena is open to play.

Framing seems like an important aspect of 3 Books. The introductions create a specific "context" for the work, but also the way you frame the images on the page adds another aspect. How much do you think the frame affects the way we view the object being framed?


Installation shots are a display of power. Especially when the work itself seems unredeemable. It's a neat effect, a sort of sleight of hand, like when high fashion uses ugly models. We focus on the figure while the  ground transforms it, leaving us disoriented, our sense of judgement suspended. That's one intent, at least. There's also the effects of circulation, how things move through different contexts, how that rubs off on the text. How the text can act as a sort of isotope we can track as it moves through various social bodies. Comics is in this inbetween place that gatekeepers of other scenes can't wrap their heads around. It's a weak position but, maybe as a result, it's horizontal. I can release my omnibus with 2dcloud and Leslie Weibeler can release her poetry book with Sonatina.

What are your thoughts on repetition?


It's the basis for any comprehension that unfolds through time.

What do you think of Terry Richardson?


What can you do ultimately? If you're qwoc you can participate in this representative system we have, liberalism. Your voice will channel many unheard voices. There is a moral demand for these voices to be heard. The need is tokenizing but you can play with this, use this platform and be used by it. It's not ideal but what would be better? There's a number of readings of anything but there's a certain default we are all aware of, that of clickbait, tabloids, reality TV, YouTube comments: women's bodies. And 'women' here being shorthand for young white women. It can be a woman with her back to us looking at an abstract painting, it doesn't matter. This is the currency. As I get older I feel less aware of reality as a state of flux. I look at how it exists, where it might be headed in the near future, when the next iPhone comes out. I've lost a sense of imagination. I've moved away from children as subjects because they skirt these issues. That's their main function really. There was some criticism of Amalia Ulman, like, is her work feminist or antifeminist? I could imagine an artist who works for decades in a feminist capacity that attracts little attention. And I could also imagine this same artist producing a single 'antifeminist' work that goes viral and everyone is asking, should we be paying attention to this? The allegations against Terry Richardson were reported as clickbait. Or at least this is how they circulated. Titillating copy packaged as moral outrage. It's just the same currency, in this case a sort of behind-the-scenes narrative aspect of its production, presented in a moral documentary framework. Assuming we're stuck with this currency, as we're stuck with patriarchy, all we can hope to do is redistribute it to those that have so far been exploited by it. But is that accomplished by authorship? At some point a sort of lesbian separatism seems to be the only way out. This is how I read Sophia Foster Domino's recent work. If there were men in these stories they just wouldn't work. That to me is an integral part of the fantasy. A group show of women curated by a woman exhibited in a gallery owned by a woman. That's getting somewhere. But as you can imagine, these things aren't airtight, there's always someone profiting, and men are in the best position to profit, so why wouldn't they? The question of what men should do isn't so compelling in a social justice sense. I don't really agree with any of the suggestions I've heard, other than basic ones like stop talking. Ultimately I don't believe change is possible. In terms of redistribution, wealth only begets more wealth. Giving it away is only going to give you moral wealth. Look at Germany. Your inheritance is all you ever have to work with. Melancholy is the basic political identity. But I don't really feel sad about it. It's more boring than anything.

Do you think about being old sometimes?

What does the New York Public Library mean to you?

Is Mowgli, Kipling's colonial boy, a comment on cultural appropriation or the imbalance of power between the sexes?


I just feel such a strong affection for him. Brown boy who hates society. It's my favorite Disney movie.

Do image overlays represent Blaise Larmee? Is Blaise Larmee your real name? Is Chateau Marmont the place where you live?


We’re all avatars for the public’s desires. There’s really no way around it. We can deconstruct and reassemble these desires in ways that seem more open, more inclusive, but it all adds up to the same thing. Inheritance. Privilege. We have these mechanisms for understanding but we still can’t do much with it, other than increase our empathetic capacities, possibly allowing pleasure to enter our lives in ways it otherwise wouldn’t, allowing for opportunities we wouldn’t otherwise notice, but always with that same underlying scheme in mind. I'm not saying this scheme rules our lives entirely but in the realm of the public it dominates. And publications are public, of course. It's the language I speak.

3 Books is described by your publisher as “a collection of drawings, a photo book, and a catalogue of paintings” but not a “comic.” Do you make comics ? How do you feel about 3 Books being read in the context of comics?


I'll always make comics and I'll always be disappointed with its limits.

What do you see as the limits of “comics” as a term?


Well, comics is a fan community. It's perhaps more about personal health than anything else. I'm beyond trashing it. There's a reason I'm a part of it. R.H Quaytman mentions how books allow one to create their own architecture in which to present their work. That degree of control is necessary on a health level for me. But then there's the architecture of spx. Tents set up in a hotel. These are fairs more than festivals. The festive element is like this awful weight attached, a sense that showing up is half the work. The best shows are the ones where no money is made. But where do you go from there?

Bill Blackbeard’s collection lives on in libraries, TJC print editions are over, Comets Comets is now a Russian tech site, and tumblr posts from years ago can suddenly reappear and become new again. How do you view art history, or more specifically comics history, in the post-net world?


The stage is certainly set in comics for a lot of history being made. That’s the message that’s been building and seems to have culminated in this last spx.

What aspect of tumblr is most interesting to you in relation to comics and/or art?


I think the notes are interesting.
Posted by Shawn Starr at 7:20 AM