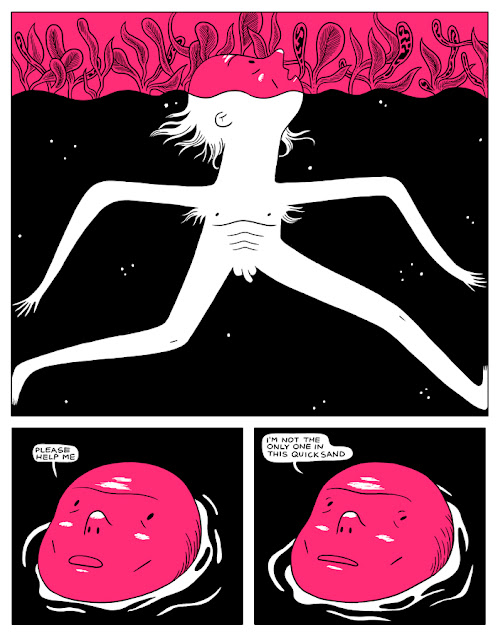 
There's this line in Julia Gfrorer and Sean T. Collins comic The Deep Ones about humanity's fear of the ocean, “And in the deep, its expanse shielded from light and time, it is easy to believe ancient things linger, that the unseen, like a fish against the legs of childhood memory, can brush against us and bite, and contaminate and consume…”


That line always made me feel uneasy, anxious in a fearful way.


DeForges Regarding Quicksand creates a similar sensation of anxiety, but in a way i still can’t describe. The narrative centers around a dozen things you can’t see touching you simultaneously that you can’t stop. Told in a rigid six panel grid, the book exudes claustrophobia. Even while staying as precisely spaced as a computer program will allow, the gutters feel like they’re shrinking every page 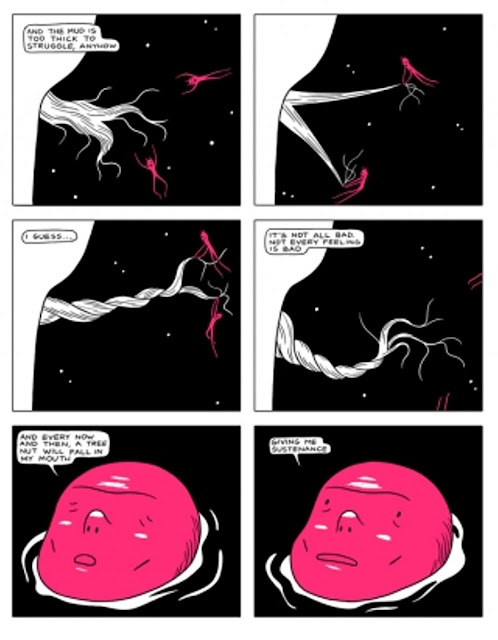 
Regarding Quicksand opens on a wide shot of the sole character adrift in an unknown body of water, untouched. We only see the man's entire figure twice, once on the first page as an establishing shot, and then as the last panel of the story. He is alone, scared, and flaccid in that first shot and surrounded, contemplative and erect in the last. What surrounds him, and what causes these changes in his body, beneath the surface, is the crux of the comic. Told in a deadened tone DeForge explores each and every feeling the man encounters, but in a way that the images being shown and the words being said are taken to a fantastical extreme. Shifts in the current, floating debris and mud turn into slugs crawling into the man's ear and mermaids biting his neck like little vampires.


While it exists on the surface as an experiment between the two planes that comics exist on, words and images, a fairly well trodden idea, it brings those ideas around again to a discussion of a character's understanding of the seen and unseen. DeForge leaves these visual gaps not as a nod towards comics theory, but as a way to show the manic nature of un-knowing. What lurks beneath and what we think lurks beneath tend to be wildly different, and the differences only seem to amplify when water is added.
Posted by Shawn Starr at 6:51 PM