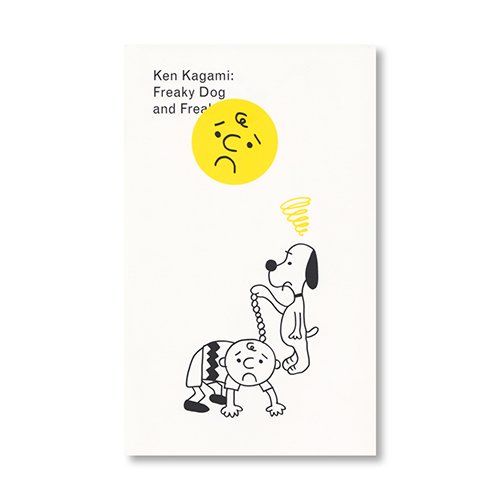 What does a black ear, a curly q, and a jagged black line mean when they are all absorbed into the same entity?

Ken Kagami’s Freak Dog and Freak Boy takes the classic Peanut’s duo and explores how their iconography relates to both of them as independent bodies, but also as a singular being. Charlie Brown and Snoopy are linked for all eternity, from christmas specials to insurance conglomerate ads, they exists in the same breathe as each other. What separates Snoopy from Charlie seems to be at the heart of Kagami’s drawings, but as the leashed Charlie Brown on the cover makes clear, they are joined together for all eternity. They are one, but not one.

Kagami’s lineweight never changes. It creates a deadness in style that refuses the idea of flair. In this refusal though, Kagami allows the iconic nature of Charlie and Snoopy to shine through his drawings. Charlies jagged line shirt permeates any amalgamation of bodies and shapes Kagami decides to place the duo within, from beaker to chess set, they are both individually identifiable but always inseparably together.

Snoopy and Charlie are bound. Every configuration Kagami places the duo in means something different, visually, but it is always the bond between the two that is being reinforced. An inversion and examination of Schultz’s repetitive gags, Kagami utilizes the iconography of Schultz’s line and figures to explore what the bodies surrounding these icons mean.

A monstrous shape reforming and deforming, but always keeping the same elements.

The footballs never pulled out, it is just absorbed alongside those playing with it.