This is the majority of the art collection I've acquired since the last one of these posts.

I think it shows a bit more of a focused arc than before, but that may just be me reading more into it and no one else will notice.


(If any artist who's work appears here wants me to take it down feel free to yell at me.) 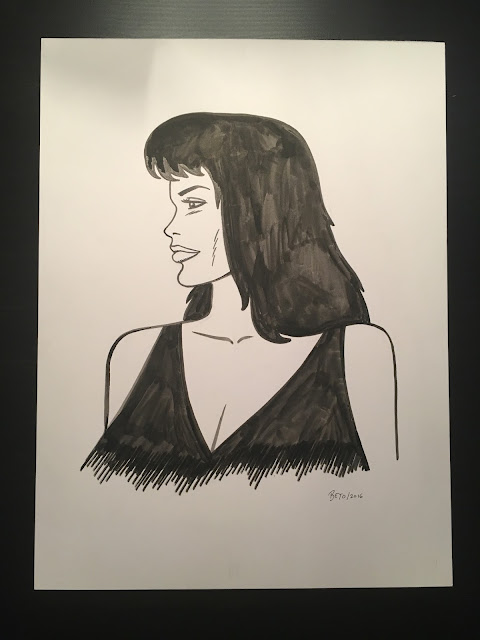 Beto does way to cheap commissions for an artist of his stature. 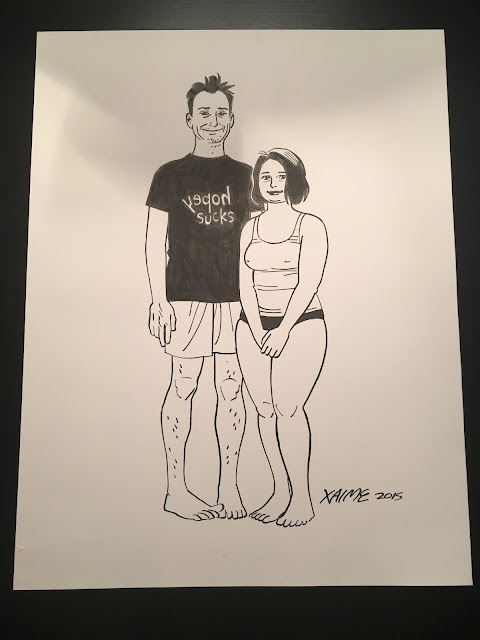 I got this from another Santoro auction. I like that the feet come across as weird, almost like a Barks drawing of Donald Ducks feet, but the faces have this sense of comfortably to them. Jaime's characters are so lived in that this drawing feels more like a photo you'd find in a random album in Maggie or Hopey's home than a commission. 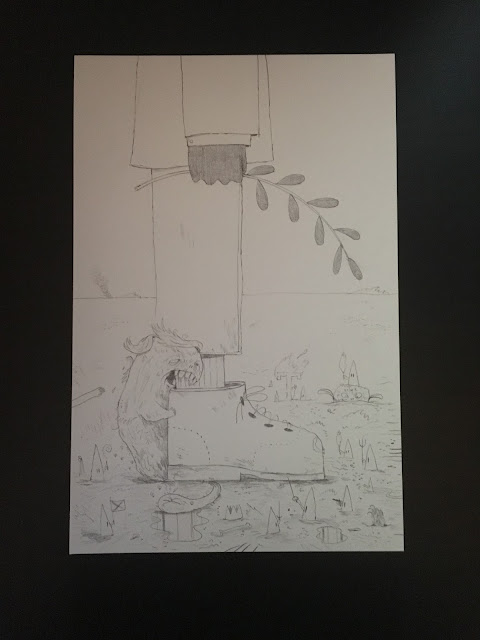 Warren's daily Trump drawings have been one of the saddest comics projects of the past year for me, not for an artistic reason, but for the now distant promise that Warren would end the project when Trump went unelected.

In continuing the project, from its intended (and in retrospect, hopeful) stopping point last November, Warren has created a series of artistic short hands and mannerisms that mutate and change on a daily basis in an attempt to try and capture the grotesqueness of the Trump presidency in real time.Warrens choices of symbols are not nuanced, they are bold and pronounced in their meaning, but it is in their slow decay and transformation, from week to week, and even day to day, that these strips become so unnerving to view. Trump transforms in real time; from a sketched off figure composed of a few sparse lines too a slug-like creature that has every bulge and pool of sludge he leaves behind  detailed, the crowds that surround his podium give way to white hooded klan members dotting every environment, T's shift from gold infused marketing brands to burning crosses on the horizon.

This is a reproduction of an illustration Warren produced based on a Trump quote demeaning John Lewis. I think it remains the most hopeful of Warren's drawing's. 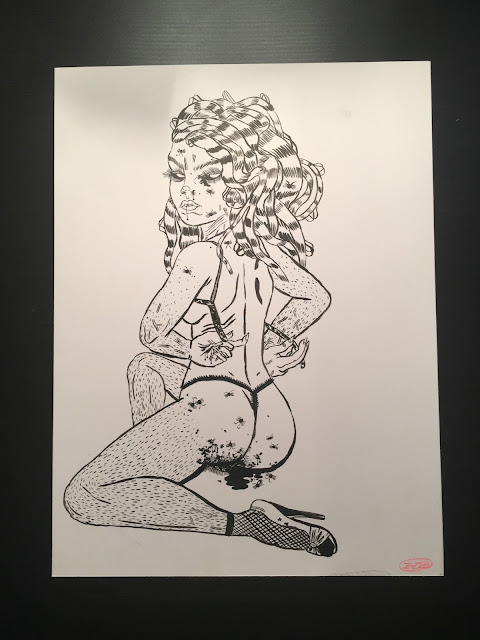 I've been wanting to get something from Heather Benjamin forever. I think she was clearing out her studio and randomly put up a ton of originals, so i finally pulled the trigger on this one. I like that it checks off every Benjamin box, wild hair, menstruation, insects, eyes that pierce through you etc. 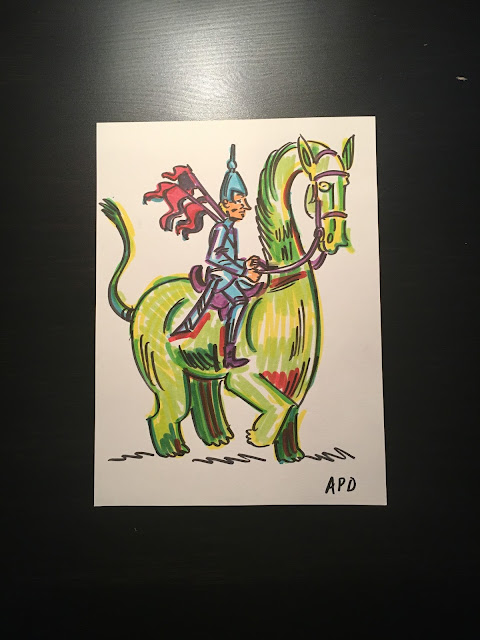 Anya was selling off the back stock of School Spirit she had purchased after Picture Box closed. She also added small drawings as a bonus item. 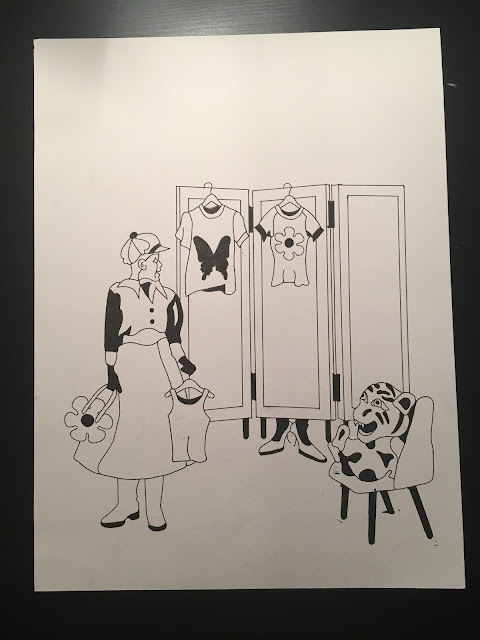 When I went to TCAF in 2016 within 5minutes of meeting HTML Flowers for the first time he dragged me over to Brie's table and began explaining to me why she was the best new artist in the building.

I've been a fan of Brie's work every since that table side lecture.

One of the things i enjoy most about Brie's work is that fashion seems to take over her figures bodies, faces, and gestures. Acts of physicality seem to be more a conduit for the clothing to move and flow forth from than actions that these beings chose to do of their own fruition.

I just gave Brie a one word general theme for this piece, fashion, and this is what she sent me. I think it later appeared in an issue of Kus! with some slight modifications. 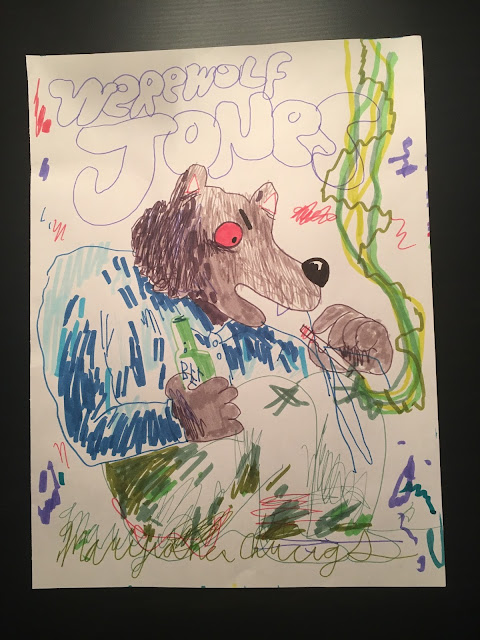 Mickey Z was doing a weird kinetic twitter commission system where if you dm'd her a request, PayPal'd her $25(?) she'd knock out a color marker/crayon drawing that day. I went with Werewolf Jones because i thought he fit in with the frantic nature of the process as a whole. 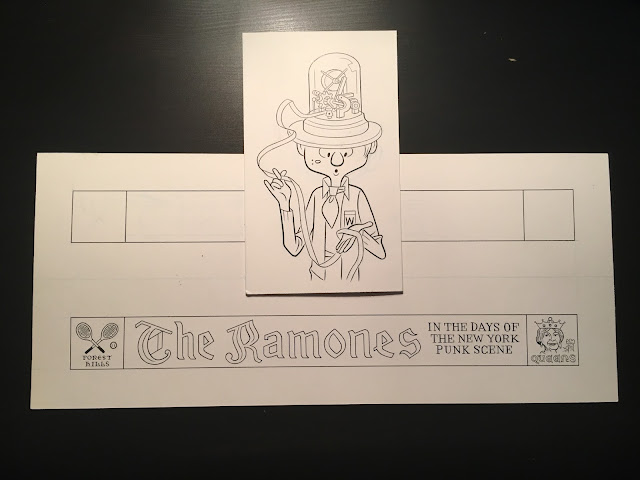 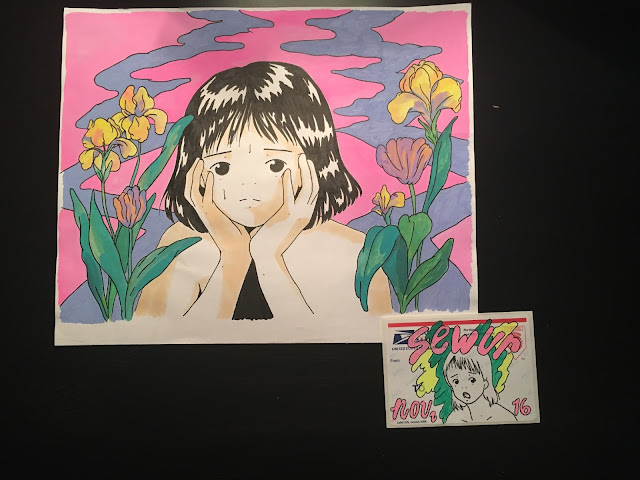 I think i just told Nou to draw whatever they wanted at whatever size they wanted in color and this is what i got. I'm the worst person on earth at requesting commissions.

Nou might draw the best flowers in comics. She's definitely the best at drawing figures with piercing eyes. 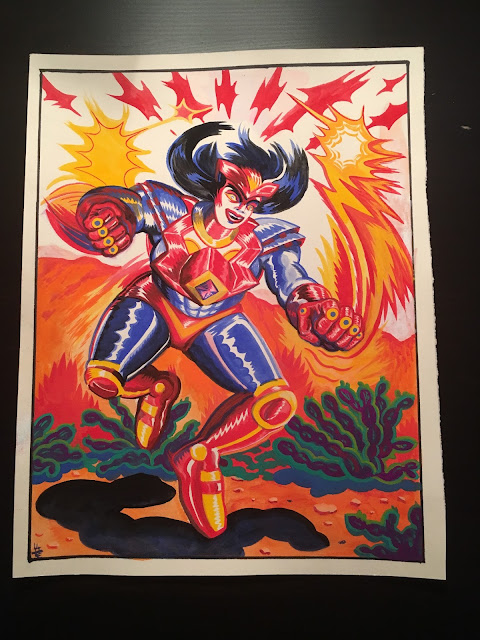 Lale has a power to her line that i don't think many cartoonists can equal. It's something that forces Kirby down your throat, but doesn't exclude or ignore the shakiness of Karl Wirsum or Gary Panter's line.

I'm kind of in love with the glee Westvind draws Barda with, she's just jumping around punching the air so hard you can see thunder. 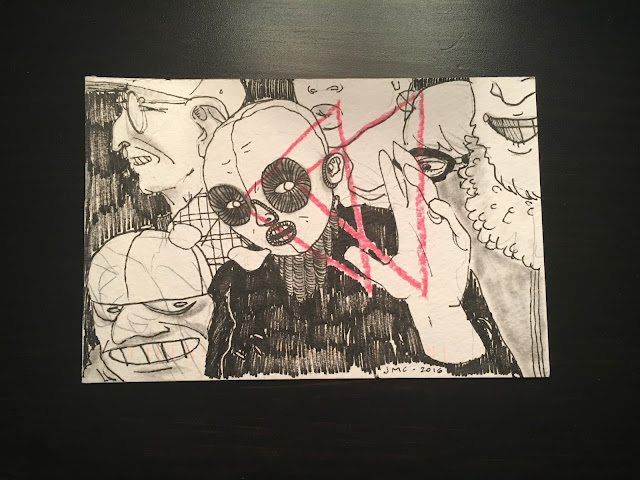 Carta, i think spurned on by the last one of these posts, adopted the $5 postcard drawing idea for a few months. They went above and beyond what i originally thought these kind of throw away art items could look like.

I've always loved the red triangles in this image. 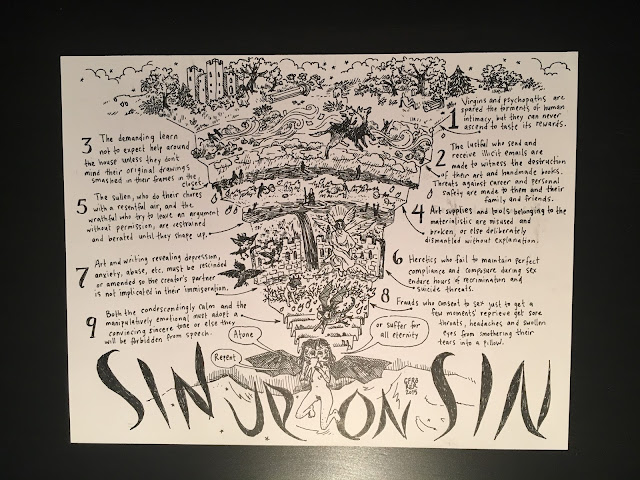 I bought this at MICE a few years ago. It was the first time i think i ever met Julia. It's a page from the anthology Bad Boyfriend.

I try to buy an original from Julia every year. It's a good system. Everyone should try it. 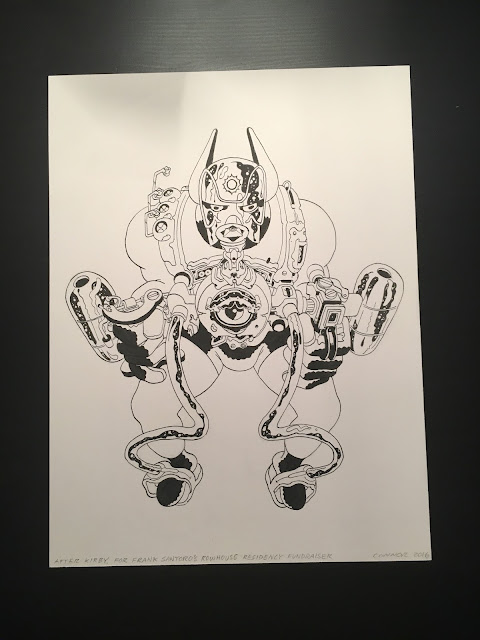 This was a kickstarter reward for funding the comics rowhouse residency Frank Santoro did a few years ago. I think you can still actually get one through the site.

Connor gave a few prompts and general idea's of what he'd be into drawing and i went with Orion from New Gods. Connor is definitely someone who you should let draw what he's into if you ever get the chance to buy an original from him. 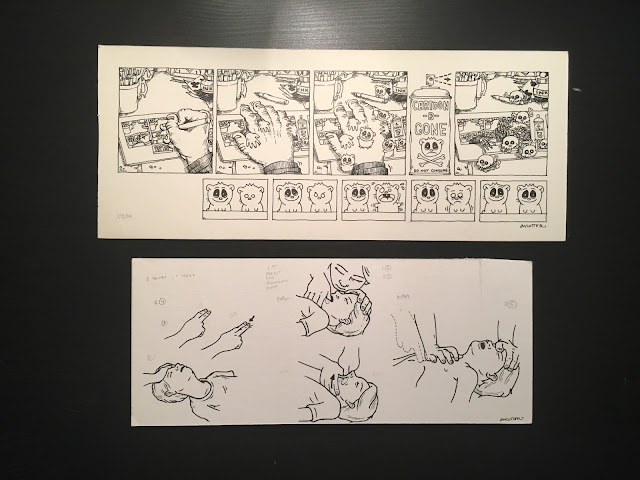 Joshua had a box of loose pages at TCAF last year with a sign saying something along the lines of "priced to haggle". I payed whatever price he initially quoted me at though because im an awful haggler.

The bottom page is a set of instructions for preforming CPR. I don't know if it was for commercial work, or if Joshua made it on a lark, but every time i look at it i feel oddly relaxed. I have no idea why. 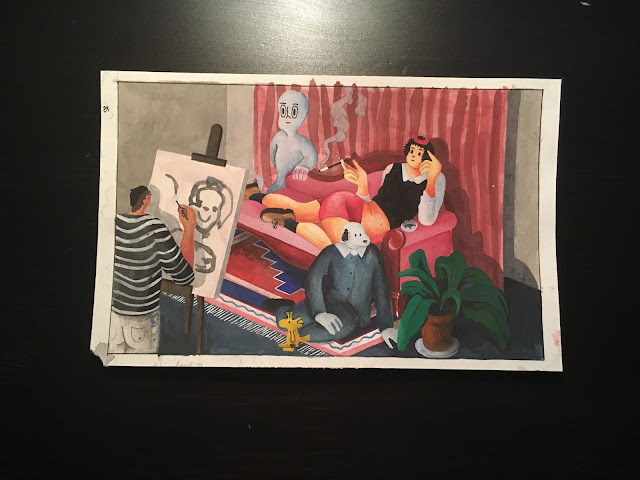 This is the (current) header image to Sequential State. Within 24 hours of Alex posting it to his site i was already in the process of purchasing it from Tommi. If anyone ever wondered what kind of person i am, i think that explains it pretty well. 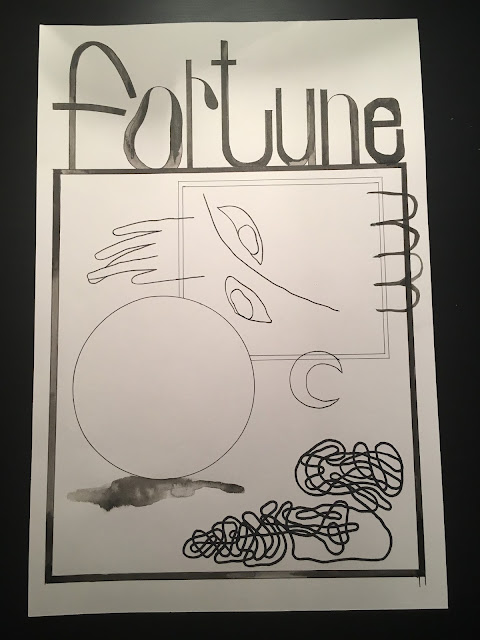 I like that this feels like a strange cover you'd find on a quarter bin sci-fi novel from the seventies. 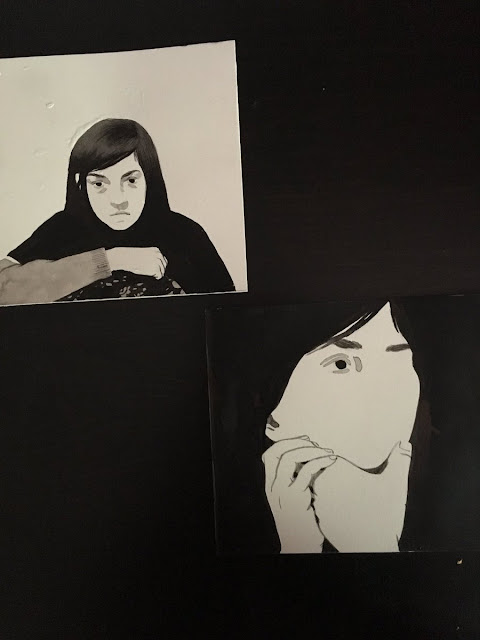 These are the opening and final images from Lannes comic in the (self-edited) anthology Bad Boyfriend. Theirs a way that blacks and whites seep in and out of that comic, how the text erases itself and doubles over itself to explain the feelings it is searching for. It shows trauma through a rising and receding level of ink on the page, that i think these two panels capture quite well/ 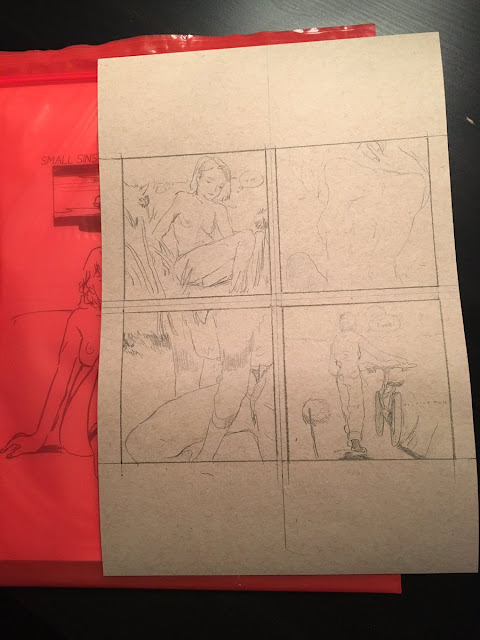 Gloria's art captures an intimacy that escapes comics at large. Her work feels delicate and loving. The way Gloria draws the bare back in the top right panel, a girl walking her bike down the side of the road on the bottom, feel like distillations of  fleeting moments. Like snapshots of a loving memory, rather than panels in a comic. Gloria's work has this way of dealing with the immediate, but also the infinite. 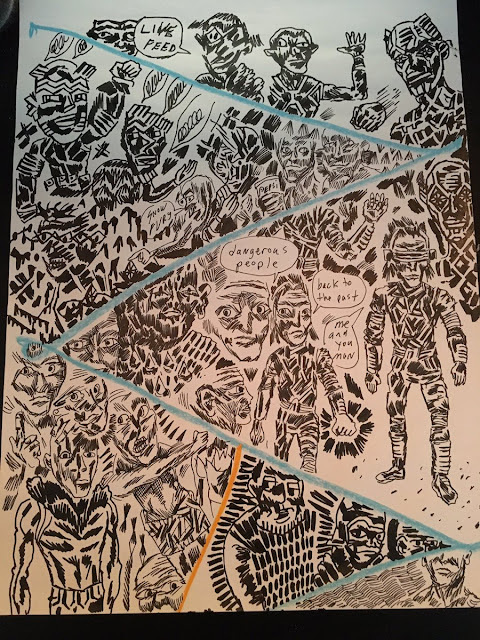 I've been going through the Picturebox back catalog a lot this year, and made a concerted effort to get all of Chippendale books i'd been missing.

I like how dense, but clear Chippendale's pages are. Theirs probably a dozen plus figures on this page but it's clear all the way through who's who and what's what.