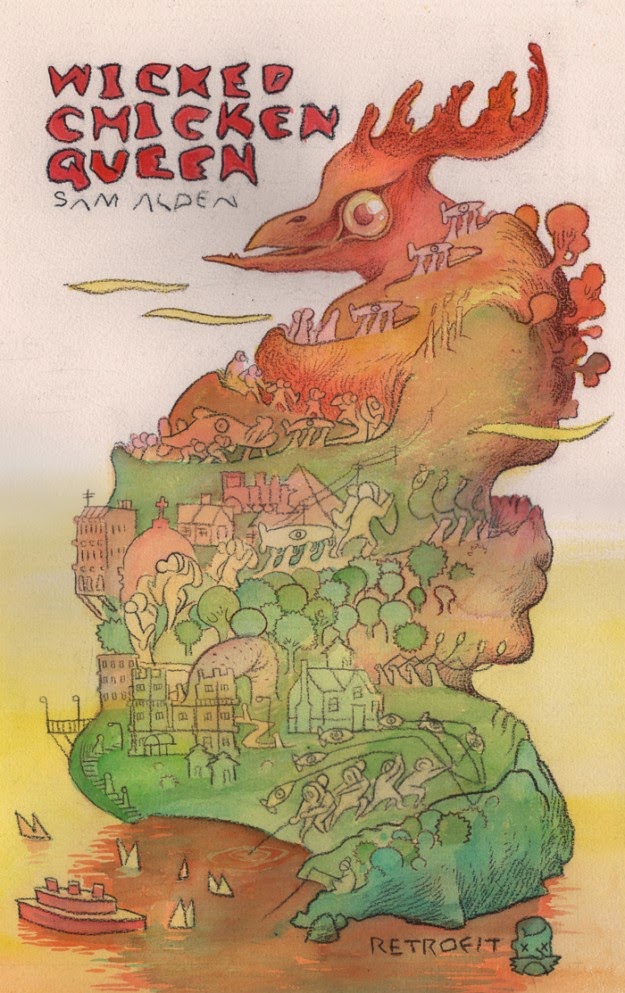 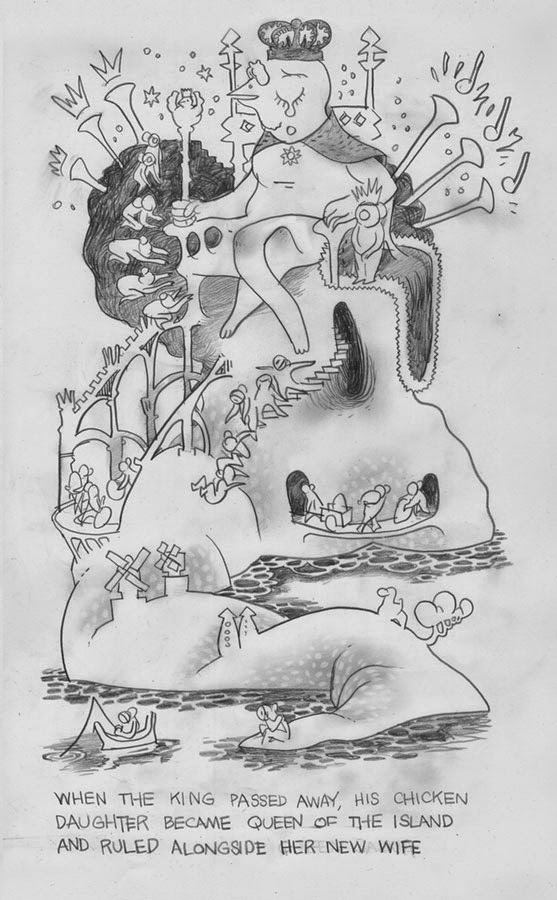 It is at this point though that the fairytale aspect of the story begins to fade away, as Alden injects the problems of reality into his fantasy narrative, life and death. Quickly after her marriage to Saskia the islands King passes away making her and Saskia the new queens of the island. While a darkness starts to grow inside the Chicken Queen due to her inability to fully process the death of her father, she and Saskia are still able to lead the island forward, and with the aid of the eggs the queen lays her subjects are able to transition from a fishing based society to one of “gathering”.This conversion allows the islanders to start building the elaborate and ornate castles which fantasy novels are renowned for. While the Chicken Queen was no longer a princess free of any cares, she was now at least a benevolent queen that took care of her subjects, what most princess i’d hope wished to grow up to be.

But then, on cue, another tragedy strikes. The death of her wife Saskia. The Chicken Queen is unable to bear this second assault on her fantasy world. She cries for a year in her palace before she is able to face her people, but then, following this momentary return though she learns that the eggs she laid which feed her people have changed, now tasting of clay. And with this final insult she retreats completely into her palace to, one assumes, never be seen again. 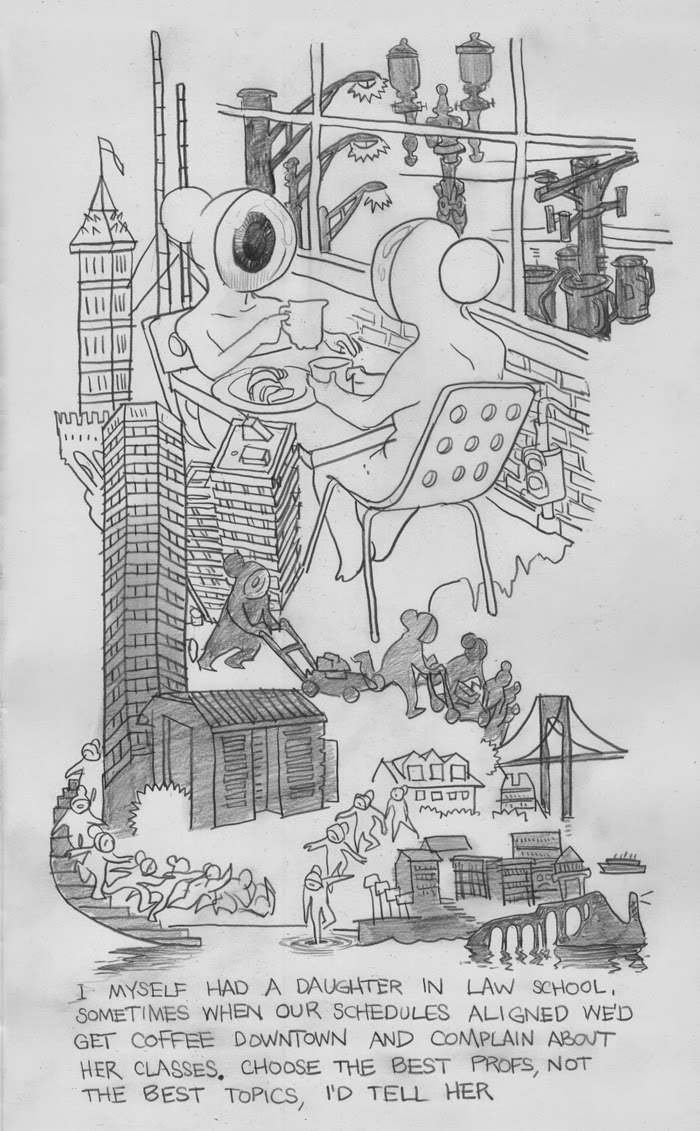 At the stories mid-way point we experience a time jump, moving the narrative decisively away from the fantasy aspects of the Chicken Queen period and into the modern. We now follow the narrator's life post-Chicken Queen, and while her problems are particularly bourgeoisie in nature (her daughter moving away too law school, her ex-husband that she’s not quite over, the possibility of losing material possessions, etc.)at the heart of them they are still the same as the Chicken Queen. Something is missing in her life that she used to have, but no longer does.The difference though is she is living with this lose and searching for a way to fill these holes.


The moment after our narrators confession though the Chicken Queen reemerges from her forgotten palace and “lays waste” to the island. Destroying the world that her once subjects had created without her. The Chicken Queen dies following this act, but it seems in that moment that she was trying to teach our narrator an alternative way to deal with her situation, to hide away and let her resentment fester. Her final act as Queen is a tantrum at those who found out how to accept  lose, those that moved on. The Chicken Queen couldn’t because she lived in a fantasy world where this wasn’t supposed to happen in. When the islands inhabitants go to see where the Chicken Queen had spent her self imposed exile living we are left with an image depicting them simply walking up the staircase to an abandoned palace. We never learn what they find there, if there is anything to find there at all. I feel Alden wished not to dig the final nail into the coffin of the Chicken Queens life though, to leave the reader some hope that a productive life could be lived in seclusion, but my hopes aren’t high for it. As the narrator says standing over the Chicken Queen’s corpse “it seemed as though she’d been dead for a long time already.”
---------------------------- 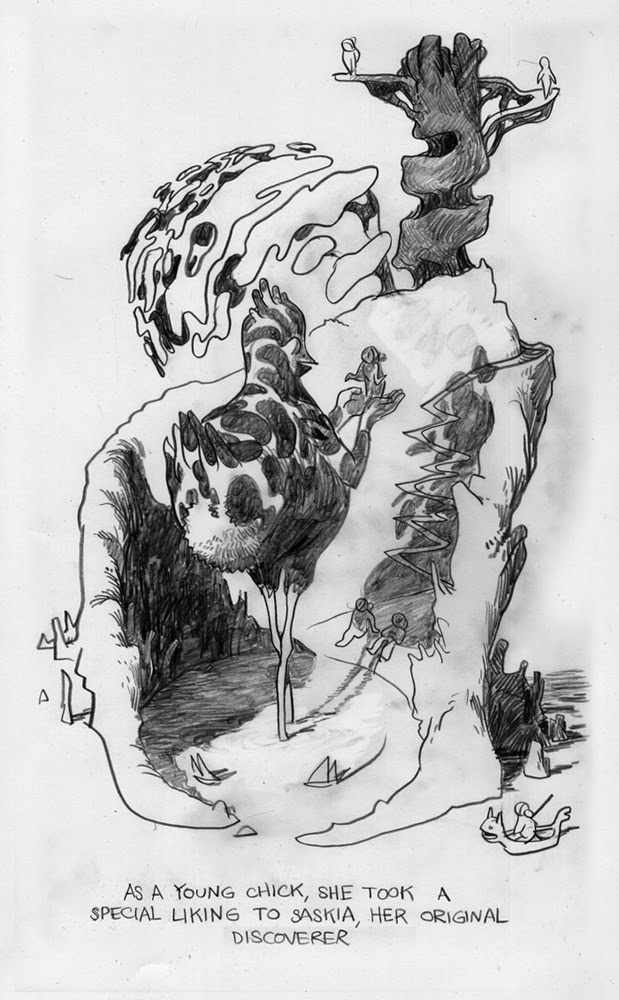 *Alden’s pencil work varies between being extremely tight (Backyard) and a more, almost playful, looseness  (Hawaii 1997). This dichotomy is on full display in Wicked Chicken Queen as each page ping-pongs back and forth between these two aesthetics. The ease of slipping between his two different styles is helped by how Alden choose to lay out the book as a series of single page illustrations. Each page takes on the general shape of the island, but morphs to highlight a specific element or moments in the Islands history. This allows Alden to move between more structured and striking single images, like the budding courtship of the Chicken Queen, which is rendered as a single page depicting the Chicken Queen holding Saskia in the palm of her hand while they stand next to a lake. It’s a quiet moment that needs nothing but stillness to capture its beauty. Alternatively when Alden needs to illustrate a  moment of excitment, like the hatching of the Chicken Queen, he loosens up his line and composition. The horns blow, the sky blurs, and the people dance in an example of a page that could not exist as a fourth draft, but instead lies in the immediacy of the first instance of pencil touching paper. The page has a flow to it that seems so simple, but that's the brilliance behind it, because even the addition or the removal of a single line would destroy its liveliness.


*This is the second instance of a cartoonist (that i’ve seen) in the alt scene using a “story” book approach to comics.That is a single image per page with blocks of text as the only written component. (The other example is Michael DeForges First Year Healthy). While this format has yet to produce a series of images less than striking, i am still left them feeling distanced from the characters. I suspect its that i don’t associate the words in the text with the character in the story. In Wicked Chicken Queen Alden was largely able to overcome this distancing effect by drawing the Chicken Queen with such raw emotion, although i don’t think the same could be said for the townspeople of the island, even Saskia and the narrator leave me feeling nothing.

*Having erased dialogue faintly visible on the page is something i unconditionally love in comics. Its like radiographed colors shifting in the printing process outside of their designated area’s. It gives the work an instantaneous homemade feeling that warms my heart. Even if the book has an ISBN.


* While I wish more of Aldens mini-comics were printed in larger formats through sheer greed, Wicked Chicken Queen is the first to truly need the space. Luckily Box Brown and Retrofit Comic thought so too. Reproducing the work at the mini-comics version of a deluxe edition i.e. a the size of a standard “floppy” comic you could pull out of any quarter bin.


*Besides the size of i’m also a fan of the paper they choose, it’s texture leaves you feeling like you’re holding the graphite smoothed and eraser stubbled originals. 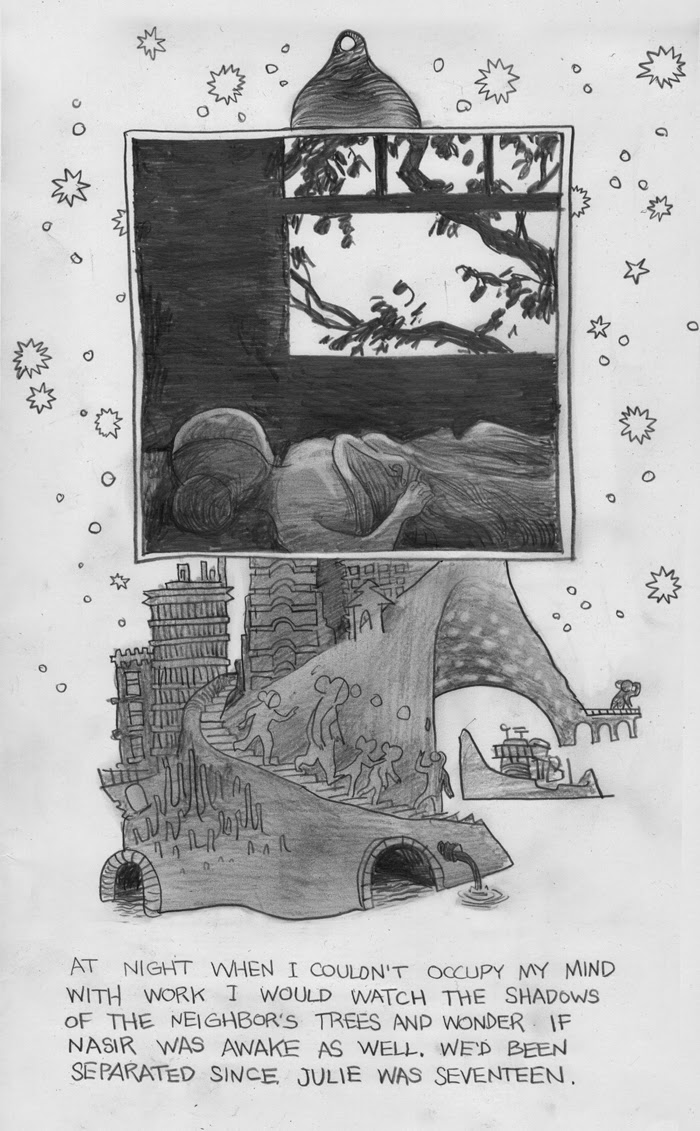 * The way Alden directs the reader’s eye in each illustration is interesting. Alden had previously played around with the way the eye is drawn across the page in his 2012 comic Ellie Olston. Ellie Olston follows the Chippendale Zig Zag layout found in Maggot (right to left down a column then left to right), but in that case it wasn’t, as Chippendale had designed it, to produce a continued sense of motion by never allowing the readers eyes to revert back to their original starting position, but instead to produce a flow in the work as the individual panels mimicked the notes of a song being sung. It was more of an artistic flourish which made sense when compared to the stories heavy Craig Thompson influence.

In Wicked Chicken Queen Alden has refined the technique a bit, but the problem is his lack of consistency in his image makings sequential nature. The first image quite intelligently teaches the reader how to read the image in a sequential manner, as a line of creatures march from a sinking ship in the bottom left corner of the page up a series of bridges and tunnels to the islands peak on the top right of the page. On the next page though we see a figure on the bottom right corner fishing and then running up to the top left with her fishing pole to a figure adorned in a crown. While these two examples are pretty straight forward and easy to discern after a moment of looking at the page as the book progresses the island at points develops into microcosms where the bottom section is to be read in one direction, the middle in another and the top in something wholly different. At other times there are no sequences to be found at all. While each image on its own is beautiful, by not providing a singular, or at least alternating way to read them they become just that, beautiful images.


* I found this page online that didn’t make it into the final collection. It seems like it was a good idea to pull it, at least in the context of this story. Still a pretty looking page though. 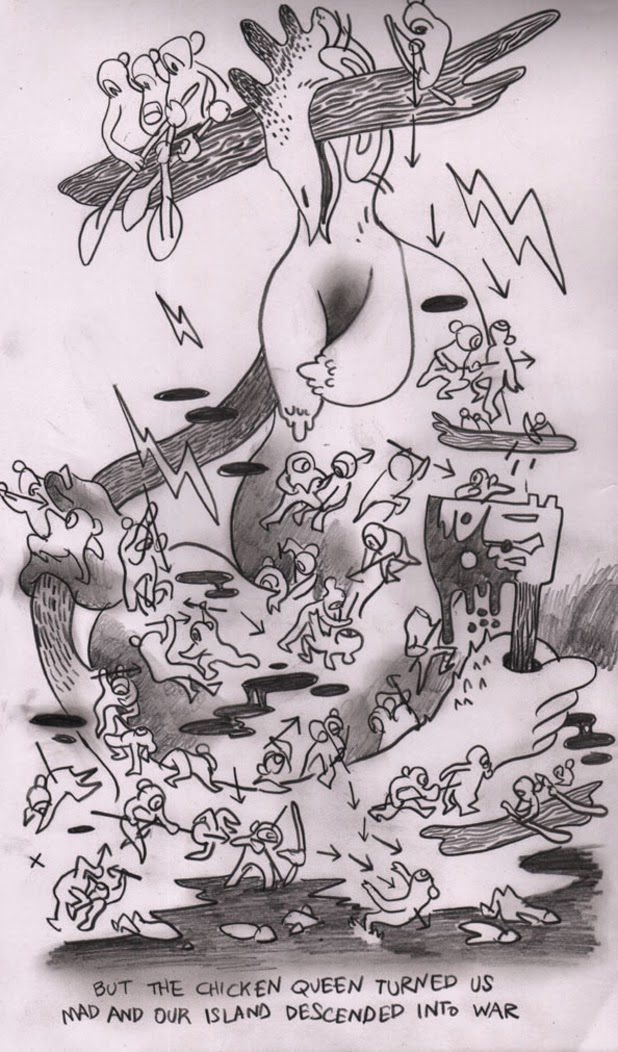