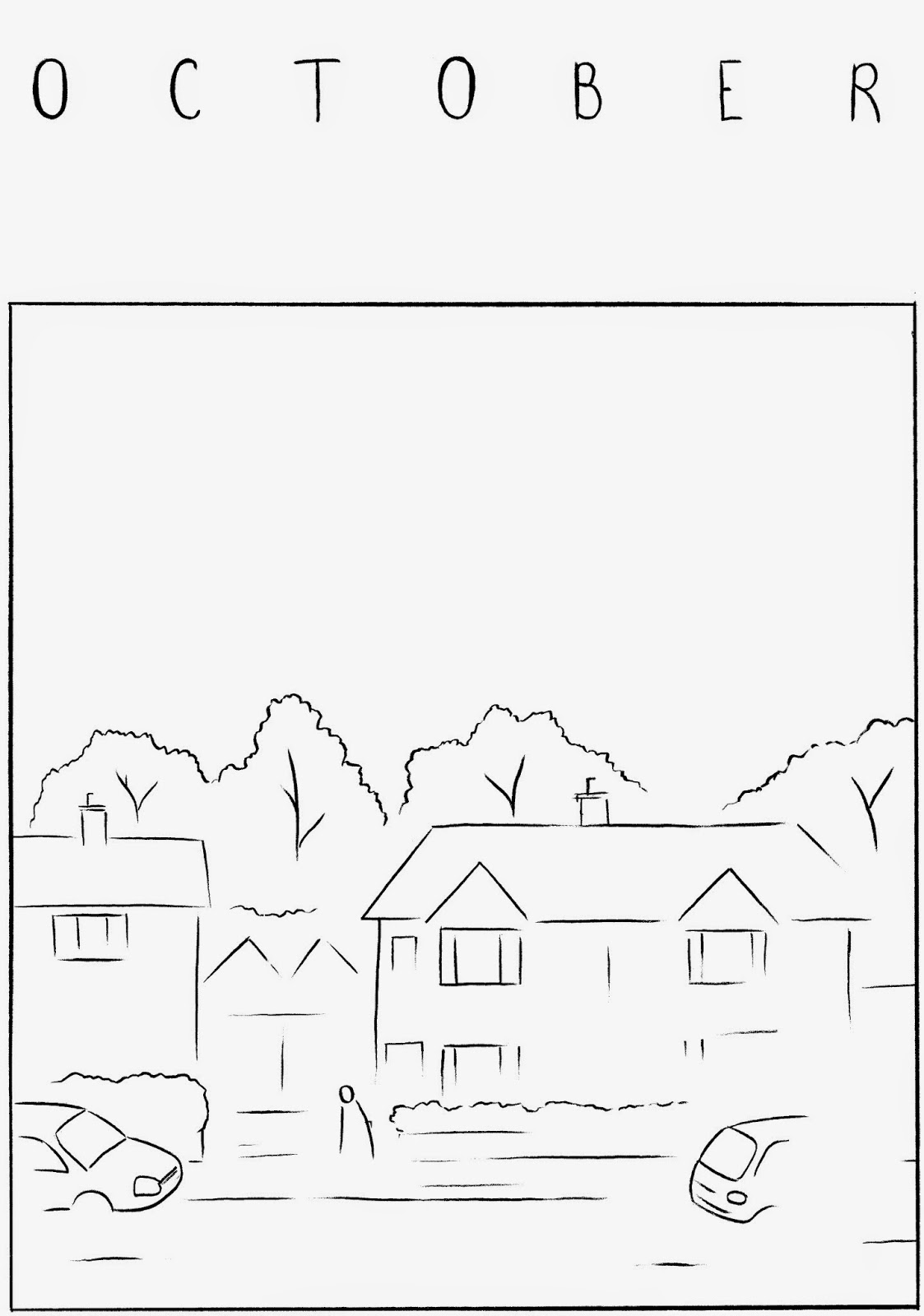 Simon Moreton seems like a man who takes a lot of long car rides. Not because he travels a lot or because Grand Gestures is filled with lavish drawings of the english countryside, but because his work is filled with the opposite. The minutia of the every day. Images that are only captured from glancing moments looking outside the car window while on the expressway. It is for this that i suspect Moreton takes a lot of long car drives, even though i don't have the faintest idea about him or his travel plans. Because no man who could revel in such tiny moments while breaking the speed limit.

Grand Gestures seems at first glance a joke title, the work as i said is about the movement of everyday life, the unextravagant. But as these three interlinked stories build over the course of forty pages we see the extraordinary. Simple things that happen in daily life, things that pass us by as we drive to a sale conferences or take off ramp mid journey to get a cup of coffee, are in and of themselves moments of importance. Grand feats that we never register because they take place between lane changes and turn signals. 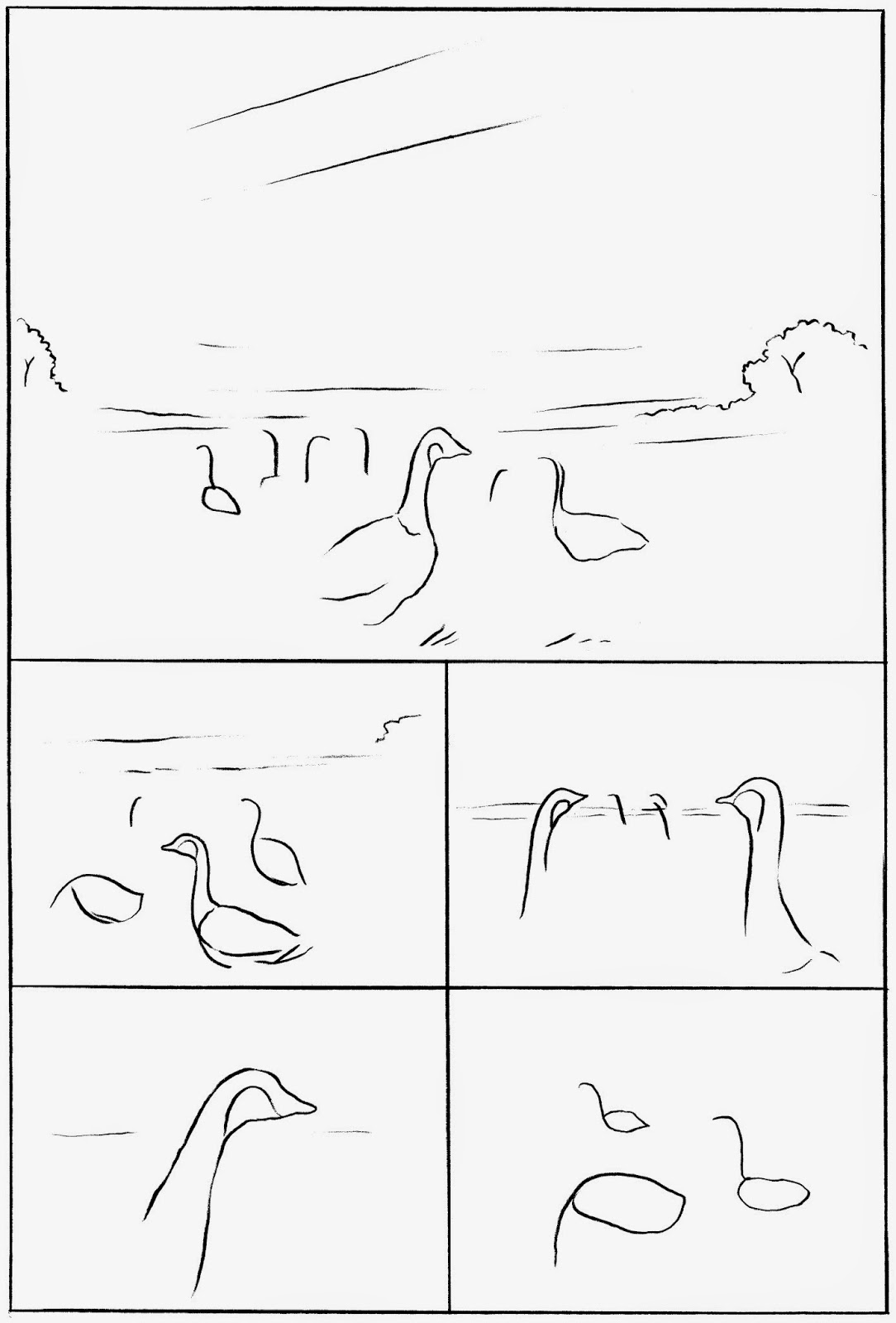 Moreton paces Grand Gestures in bursts of motion and moments of stillness. The road, parking lots, overpasses rush by with the intensity of a car driving eighty, until the page becomes transfixed on a single object. Moving closer and closer until it again whisks away in the space of a gutter. The reader moves through Grand Gestures like a driver looking around for miles and miles thinking they're lost until seeing a factory with an odd sign, an old barn, a dilapidated shop and suddenly knowing exactly where they are in space and time. Moreton is looking for that sign to fix his eyes upon and he find it in the migration of geese.


While the wordless collection has a protagonist of sorts in a business man, it is really the environment that he exists within that is the focal point.Taking place between October and November, the migratory period of the Canadian Goose, thousands of birds flying thousands of miles to a single location without the help of GPS, but one which most people will not look at with importance, if at all, we ourselves only see this act transpire alongside our ‘protagonist” daily migration from home to work. It is a side-plot occurring between exit ramps, bt it is the only plot of importance in the work. 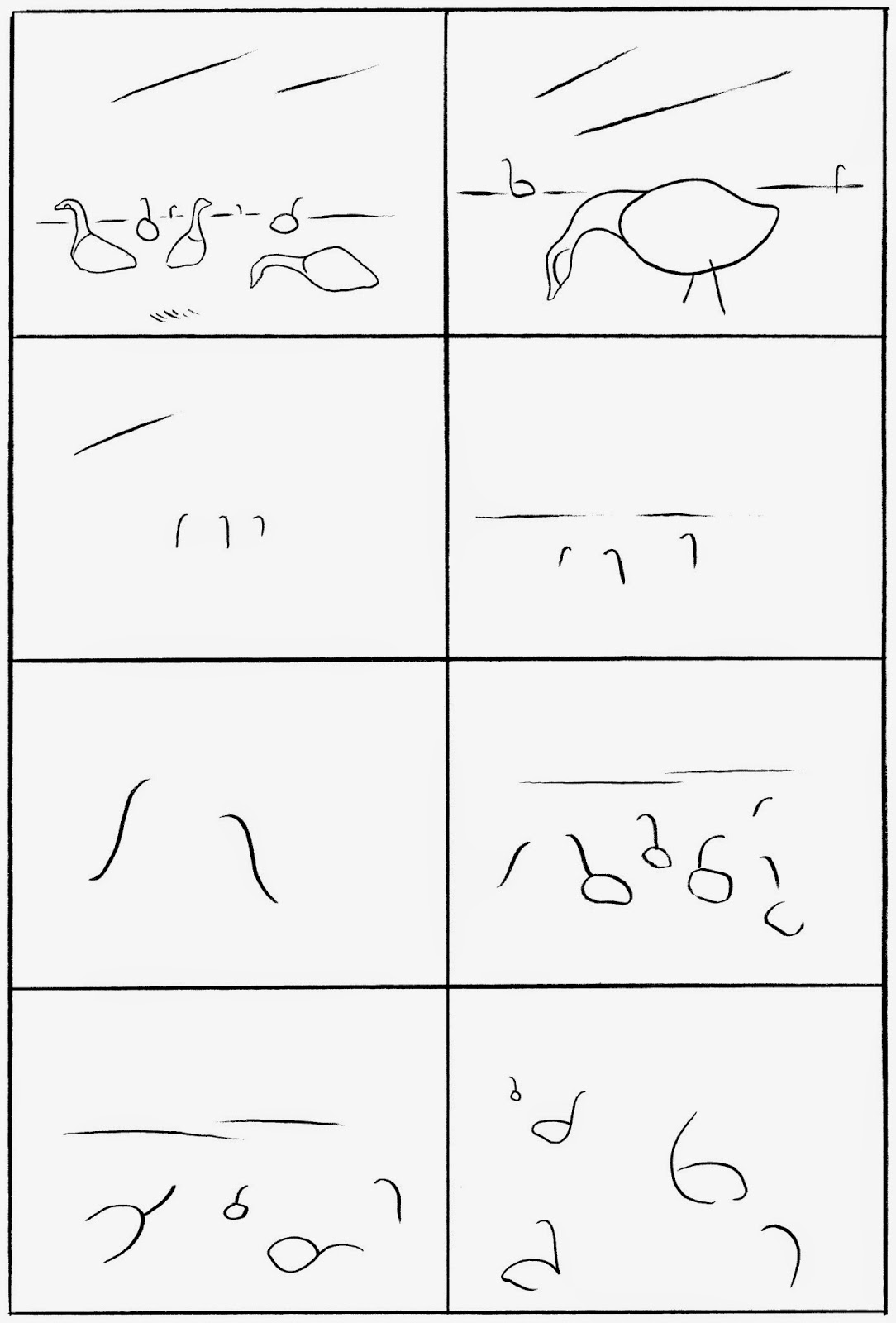 In the most climactic moment of the work we see the unnamed protagonist walk towards a field that is occupied by geese in mid journey. We are left by Moreton, panel by panel, to relearn the meaning of a brushstroke, with each of his lines denoting entire ecosystems in upheaval. As the man gets nearer and nearer the flock his own shape, a circle with an oblong attached, begins to warp into something else, something trying to be closer in touch with the geese, with nature, something trying to fly away with them, but unable. Bound to the earth by sales conferences. While this is happening the geese on an almost panel by panel basis begin transforming into leaves falling from branches because of the cold, a forrunner of the death inherent in the winter, one which literalizes the need of  the geeses to find a new habitat. Our business man doesn't have this biological imperative. He just goes to the mall and waits for the seasons to change and the geese to return.

Moreton’s artwork falls under the comics minimalism camp that has recently been on a resurgence. His lines are not solid or through, instead the take up as little space and travel as little distance as necessary to convey the idea of the object to the reader. A slightly curved line becomes an exit ramp, a circle with a oblong attached becomes a man and the letter V becomes a migrating goose. In it's minimalism Moreton pushes the reader to find their own meanings, their own associations.

*It’s weird when you stumble over a section of a Wikipedia article that kind of perfectly lines up with the plot of a comic. “Their autumn migration can be seen from September to the beginning of November.The early migrants have a tendency to spend less time at rest stops and go through the migration much faster. The later birds usually spend more time at rest stops.”


*You can watch a SPX panel about Comics Minimalism which features Simon Moreton. I think it has all the key players in that scene besides Aidan Koch, at least from my understanding.