It Was A Video Installation Of Linda Ronstadt 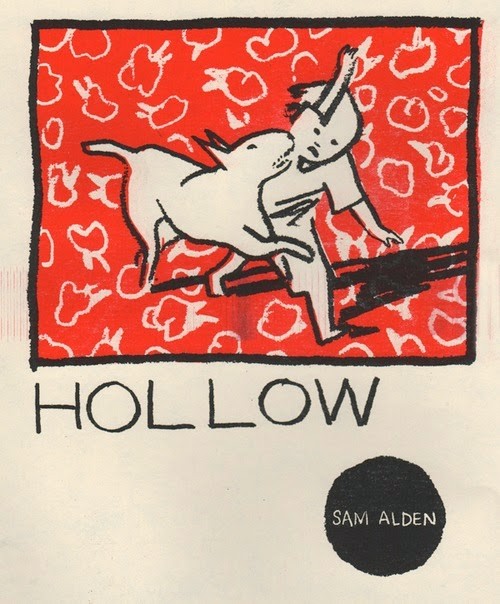 
You see Sam Alden playing these games lately. Boxing himself into corners. With Wicked Chicken Queen each image needed to both convey the narrative and exist as a representation of the island the story took place on. No panels. One image per page. With his pixel art he’s using a bootlegged and glitchy copy of MS Paint that sometimes doesn’t allow him to erase sections. After deconstructing his artwork to the essentials, a graphite pencil and paper, Alden’s line can’t be reduced any further. So instead he plays these games. 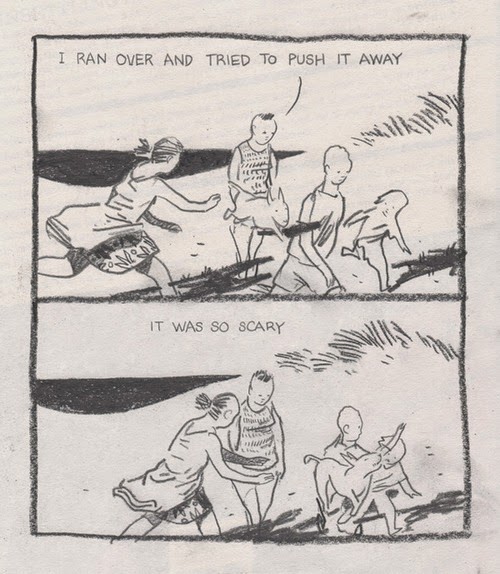 Hollow follows motion like energy, waiting for a spark to appear and then following it until it burns out. Opening on two teenagers talking about the “Hollow”, the economics of summer beach homes, and Lara Croft: Tomb Raider we watch one of them craft an apple pipe, but following a few hits it is knocked over and the contents housed inside fall into the sand.


They decide to go home.


Alden uses the comics equivalent of a single tracking shot here, following them as they walk the length of the beach back to their home, showing each step the characters make, each gesture, creating an animation like feel. During their walk one of them begins telling the story of a dog attacking her younger brother. Instead of telling this bit of backstory as a series of talking heads (comics is a show don’t tell medium) or breaking the shot and moving into a flashback, Alden instead visually incorporates the story into the scene itself. As all the chaos one would expect a dog attack would entail interweaves between the two teenagers footsteps; the shot continues. They go home.

Reminiscent of Blaise Larmee’s 2001, Hollow feels like animation. While Larmee stayed away from boxing his figures (explicitly) within a grid in 2001 Alden, needing for his story to work as well in print as on tumbler, fixes Hollow within a two panel grid that is so unobtrusive that you hardly recognize it being there. This grid keeps the eyes moving downwards, in one fixed position, instead of darting side to side and breaking the reading continuity.


Like many of Alden’s works this story has a precursor of sorts, the soon to be released in book form Hawaii 1997, but where Hawaii 1997 relied more on dreamlike steps, blinks in between moments that land you fifty yards away, Hollow is more stringent in conveying its motion, focusing on each character's individual movements, not just where those movements lead you. Both ways work in their respective stories, but you can see Alden trusting in his own abilities more and more with each project, which make the games he is playing all the more interesting to watch. 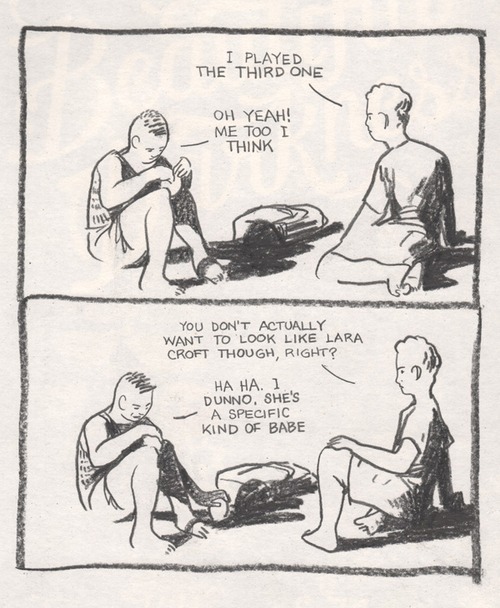 Alden draws his comics on paper. A holdout in the digital age. This requires that each page be scanned onto a computer for publishing purposes.

In the act of scanning each page you can see the hint of additional textures on each page, not created by the scanner, but by the object that is holding the page down. For the majority of the book it looks like this object is a block of wood, with long horizontal strips of dark and light matter appearing in the deep background of the images. This added layer feels at home with the page though, the texture creates a naturalism that was absent before, a warmness to both the beach and the household, creating a graininess to the page that resembles a deck blasted by sand over the course of a decade.

For a short three page segment though another object appears in the background. When the two teenagers are down on the beach and talking about the mysterious event known as the “hollow” you can see the imprint of the words Beautiful Darkness scrawled over the top of the page. Beautiful Darkness is a comic published by Drawn & Quarterly, the ad copy describes its plot: “Join princess Aurora and her friends as they journey to civilization's heart of darkness in a bleak allegory about surviving the human experience”. While Hollow is not a fairy tale, or at it hasn't been reveled to be yet, it does seem to be mining a similar thematic space. Underlining horror.

The title, Beautiful Darkness, also has another meaning in the story. The Hollow takes place during the night, when the children are inside, the doors are locked, and their mother can drown the noises coming from outside out by raising the volume of the TV. You are left wondering what is out there in that darkness though, maybe it is something beautiful. 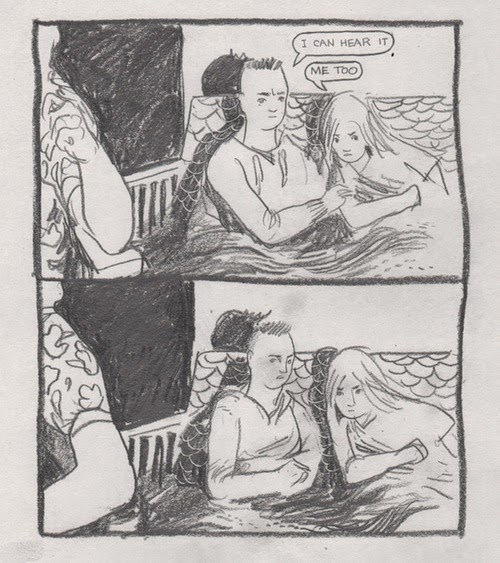 There's a horror in Hollow, something tingling underneath the surface that is not for us to see quite yet. One of Alden’s strengths, and a continuing plot device across his comics work, is the unveiling of what lurks below. The Wicked Chicken Queen slumbers across each of his narratives, but he paces her arrival so effortlessly that you don’t feel yourself waiting for the reveal, but rather revel in each moment, each composition, each line leading up to it.


Even if this was a one off, which Alden has said it is not, Hollow stands on it’s own. Maybe you don’t need to see the monster, but instead sit in the parlor and watch a movie with your mother with the volume jacked up high enough so you don’t hear what's going on outside.


Oh sorry, that’s not actually their mother. It’s someone else... 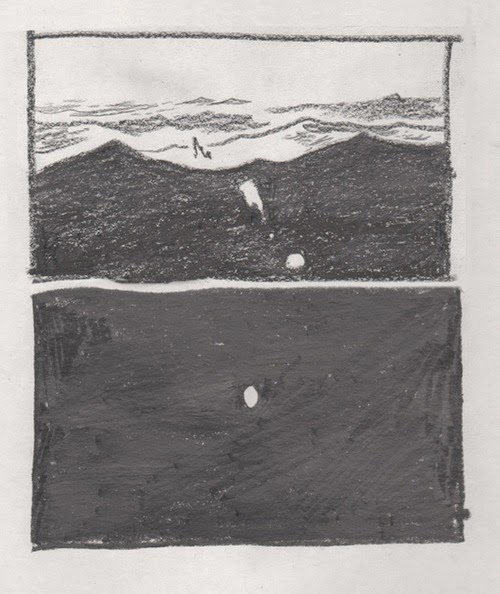 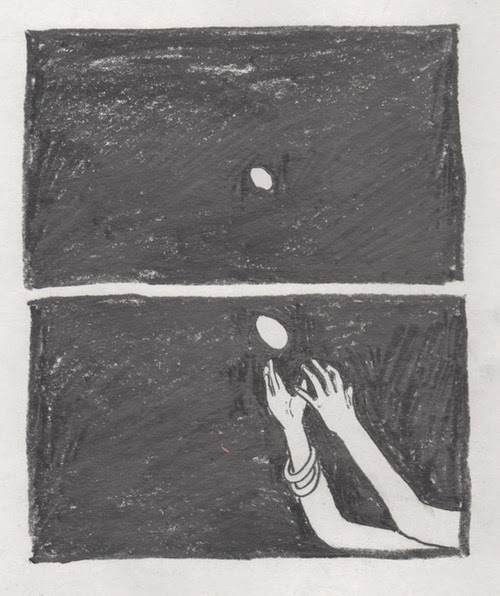 (4) endnotes - places to read, places to buy and henceforths


You can read the entirety of Hollow #1 on Sam Aldens Tumblr.


His new book It Never Happened Again came out this month, from Uncivilized Press.