grandpa’s on the hobby horse again 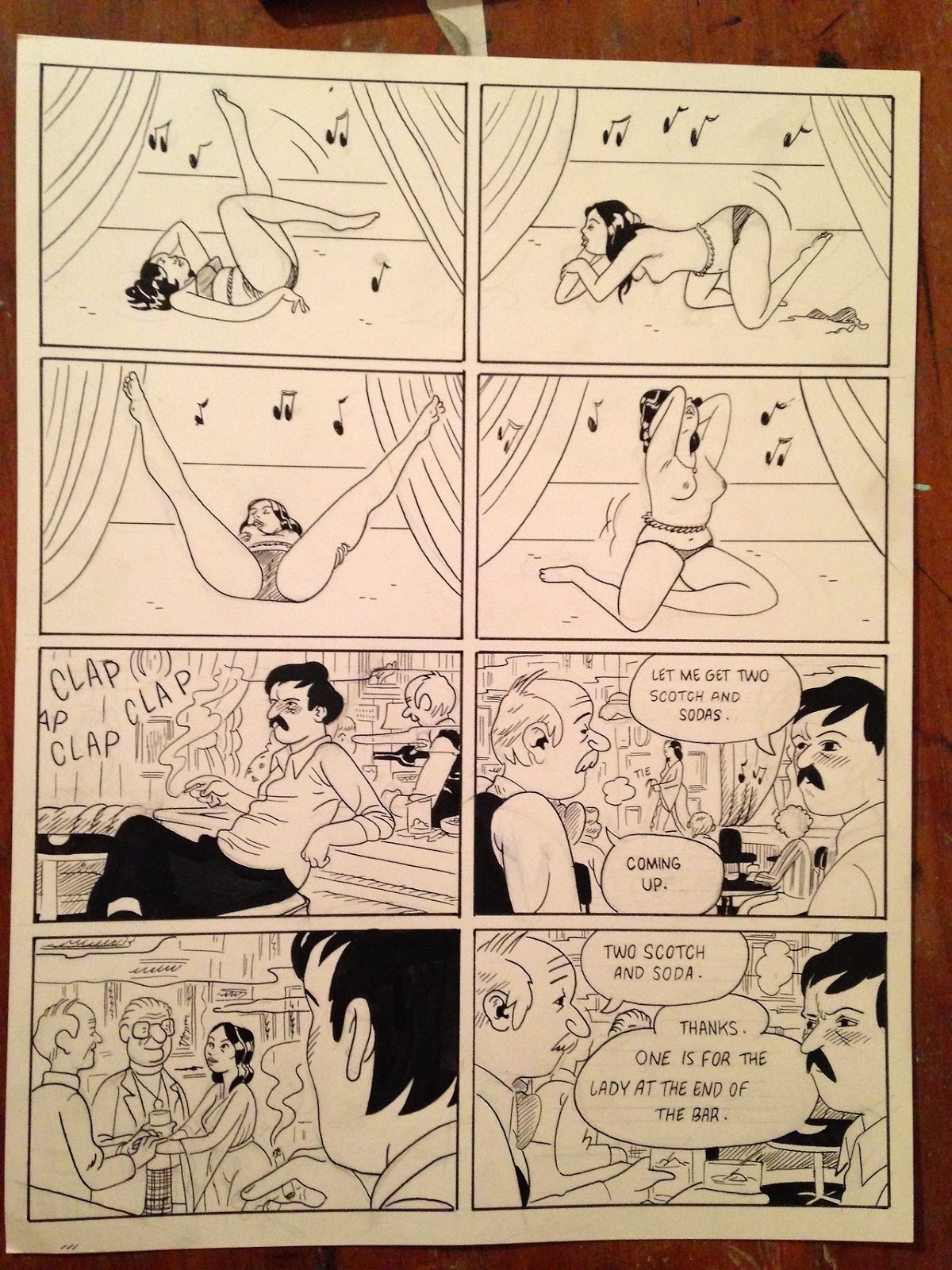 Sammy Harkham uploaded some originals from his still in progress book Blood of the Virgin. I was able to snag a “damaged” copy of Crickets #4 at CAB last year, which had the first published iteration of it, and even that small sampling was rather fantastic.


Harkhams pages are less messy than i was expecting. Seeing them changed a bit of my thinking about him. He always came off as someone who labored over his stuff. Fiddled endlessly. That's one of the reasons why I enjoy looking at artists originals, they reveal something that the print version doesn't. There was a short Dash Shaw piece on Comics Comics about seeing a Chris Ware exhibit in Angouleme and being shocked by how laborious they seemed in their original form compared to how precise they were on the actual comics page. You know each image in Lint had forty different iterations before hand, but it’s another thing to see them on the page. Hiding behind ink.


Julia Gfrorer’s essay for TJC was excellent, in keeping with her tradition of excellence. 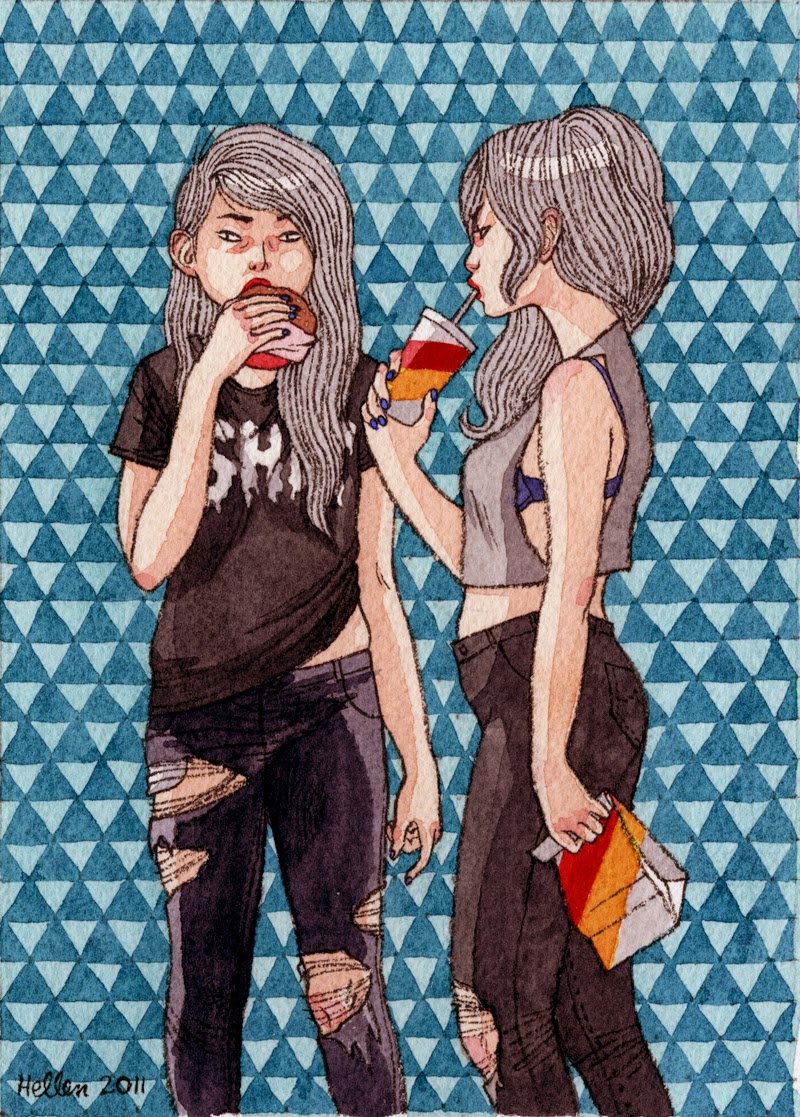 A Tumblr called Vangirls interviewed Helen Jo. Jo’s the first artist from Youth in Decline’s series Frontier who i had absolutely no awareness of beforehand, and then completely fell in love with afterwards. Her issue of Frontier is luckily still in print and worth a purchase. A brief excerpt on what she draws:


“...which depict either specifically made-up girl gangs, or randomly assorted loitering teens...I love to draw angry girl teens sitting around in the moment directly after something cool or bad or fucked up happened, and I like to leave narrative clues in each illustration so the reader can figure out or make up the scenario of the piece.” 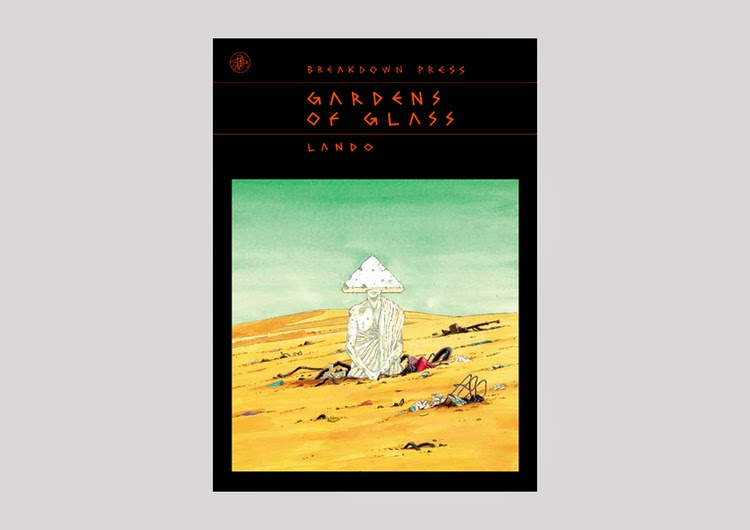 Preorders for Lando’s Gardens of Glass are up on the Breakdown Press site. Lando was my big “who’s this guy” moment from Mould Map 3, so i’m excited to see a lengthier piece of work from him come out in print. 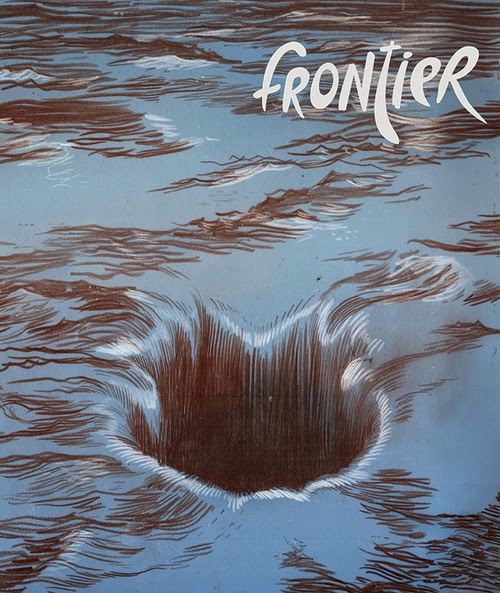 Youth In Decline posted the cover for Sam Alden’s issue of Frontier. I like how ominous it feels. From my understanding the story is tangentially related to his ongoing story Hollow.


In my continued rummaging through old Comics Comics posts: here is Gary Panter and Peter Saul in conversation, moderated by Dan Nadel. 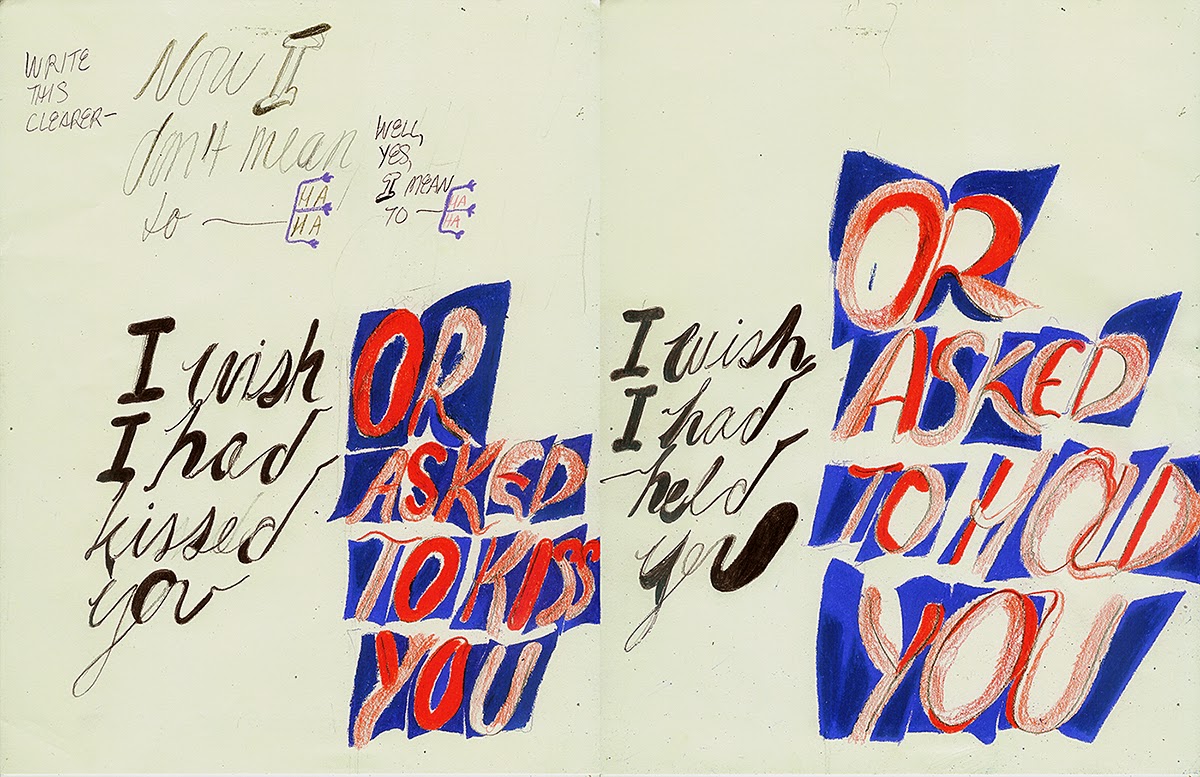 I’ve been going through Sarah Ferrick’s tumblr lately. Her use of lettering as the primary form of art, with supplementary imagery, is really interesting. Both combative to the idea of comics as “pictures and words” and simultaneously complementary.


Becky Cloonan does a short comic about baking.


The two most important Ann(i)e’s in comics talk, Anne Ishii of Massive and several other ventures and Annie Koyama of Koyama Press.


I enjoyed this Dan Nadel review of Hal Foster’s Prince Valiant. That's a series i have to get around to reading soon. Probably once i run out of Roy Crane and Jack Kirby comics. In odd comics synergy news, CBABIH also briefly talked about Prince Valiant in their most recent episode.


“Larmee: Whenever I pick up Young Lions and flip through it I kind of laugh in a funny sort of way, like maybe the way one might laugh at a child who is trying to impress an adult by attempting a cartwheel.” 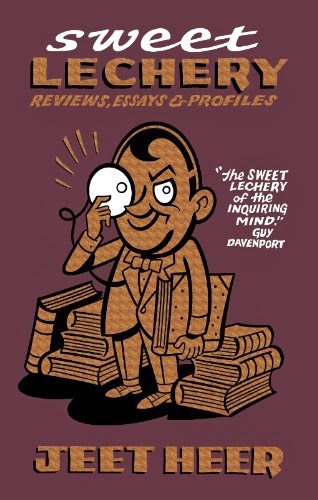 I don’t think i’ve heard any announcements for it, but their seems to be a Jeet Heer collection of “reviews, essays and profiles” coming out titled Sweet Lechery with a nice Seth cover.


The Dissolve had a nice essay comparing Boogie Nights and Magnolia.

Watched all of the Rambo franchise in one night. I enjoy that a character exists simply to hype Rambo up to everyone.


I wonder if First Second has a weird fetish where they can only get off by having artists spend years drawing a book and then ruin it with a series of awful story edits and an insistence in over narration.


A profoundly odd interview with Chris Ware. That cover image looks like something a schizophrenic with a vague knowledge of Ware layouts and an obsession with college would create. 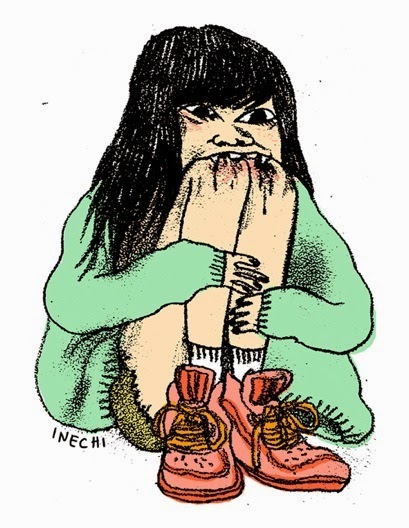 Ines Estrada interviewed. Estrada’s response to her use of body horror is worth reading:


“We live artificial lives were the brutal reality of nature is forced to be hidden and sanitized, so I like to expose that and poke fun at it. For example, our own bodies are a part of nature, they have needs and reactions we sometimes don't understand and for the most part can't control. Instead of accepting that, society works hard on making us feel embarrassed for it and forces us to hide it. This goes for anyone, but if you're a woman it's even worse. Why is the animal part of humanity so threatening? It is in this animalistic state that we are able to experience life's biggest pleasures and also to commit the worst atrocities. I am fascinated between this connection of the spiritual and the visceral. I like exploring and exposing these things I feel throughout my work, as raw as they are, and hopefully have other people resonate with them, whatever their reaction is.” 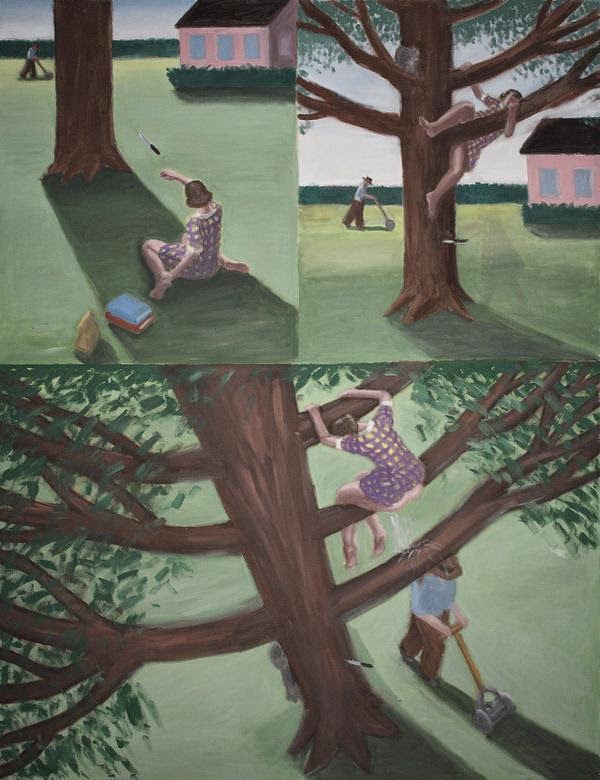 Always nice when an older artist starts a tumblr, especially when that artist is Jerry Moriarty and he starts it off with a dignified series of piss comic/paintings.


As many comics as i read, Jog continues to be able to bust out giant pieces on stuff i’ve never heard of on a continuing basis. Here he is on the artist Ryōichi Ikegami.


Greg Hunter interviewed Brian Evenson about his recent book on Ed The Happy Clown, Ed vs. Yummy Fur. One thing Evenson mentioned, and i agree with, is how different Ed reads in Yummy Fur in a religious sense. Ed isn't lacking in christian allusions, but when you flip the final page of the Ed story in an issue and are met by a straight adaptation of the Gospel of Mark or Matthew it makes them even more explicit.


A list, outfitted with links, of all of Michael DeForge’s work currently available to read online. If you didn’t know already, DeForge has a shitload of work available online.


William Cardini’s “9 Rules for my Comics” 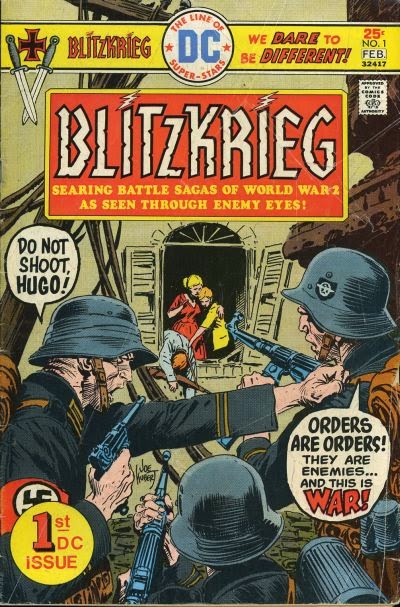 These covers to a 1978 DC comics series titled Blitzkrieg by Joe Kubert are worth a look. I assume an editor saw the company line of “We Dare To Be Different” and took it a little too literally. That Hugo dude seems like a massive asshole.


A short film by David Cronenberg. It may seem vaguely familiar to some people because a cut down version of it that was used as the trailer for Cronenberg’s new fiction book Consumed which is due out later this year. 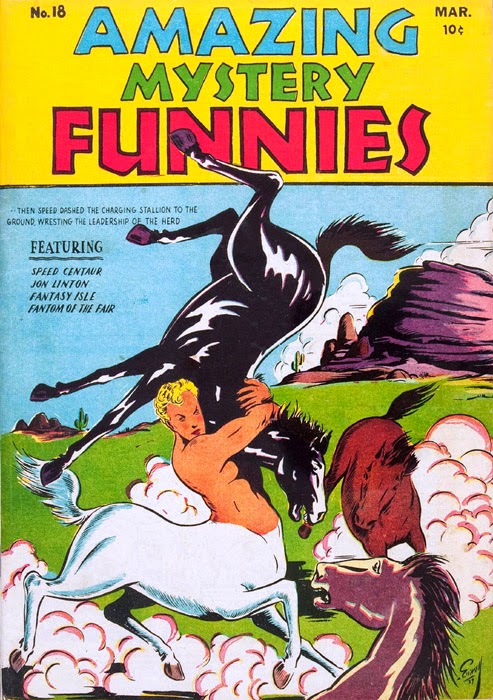