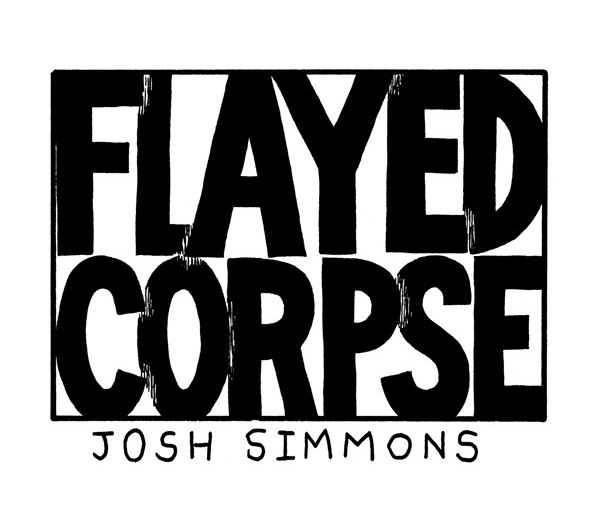 It would be simple enough for Josh Simmons to draw a series of gory images over twelve pages and call it a day. It's something he excels at, but Simmons (as always) adds additional layers to his work, and this is what distinguishes him from other horror artists. Simmons can be as disturbing and horrific as everyone else, more so in fact, but by including the seeds of something more lofty he is able to force his stories into the readers sub-conscious, leaving them to linger long after the final page has been turned.

The standout element of 'Flayed Corpse' is Simmons use of dialogue to tell two stories at once. Layering each words meaning around a single event, an autopsy, creating both a grotesque examination of a mutilated corpse and a commentary on philosophy, science and their relationship with humanity. 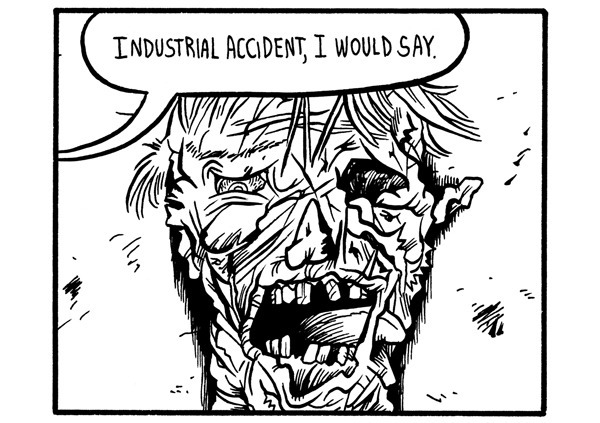 This double narrative begins on the first page as a mysterious voice address the other coroners "Industrial accident, I would say", commenting on the injuries the man has suffered, but also expressing a decidedly Marxist critique. This critique is drilled home by another shadowy figure who remarks that the marks more so resemble those caused by an angry mob wielding machetes. This brings to mind the Reagan-era funded death squads of South America, capitalism in action. The two go back and forth over the next four pages, conceding some points while bringing up new ones (racism, self reliance, etc) until a third figure interjects saying that they are both right and wrong, the man was tortured, burned, ground up, beaten, and hung, but it was both of their actions that lead towards these injuries.

This third voice has a definitive tone to it, in both discussions (the political and spiritual) this voice is granted the final word on the matter. By setting this story in a scientific facility Simmons seems to be stacking the deck in favor of this third voice, but his answers are no less cruel than those produced by the other figures, if not more so, due to their calculated and sterile tone. His final statement, combining the two theists ideas of the after life and blending it with quantum physics "Neither of you are exactly right, or wrong...He died terrified, in agony. And it echoed out and was absorbed into a universe already sick with pain" creating a fate far worse than those posed by the Marxist or Capitalist coroners.

What Simmons never does though is push the readers sympathy towards any of these "options". By only showing the coroners in silhouette; Simmons doesn't allow the reader to identify with them. Instead Simmons humanizes the corpse, keeping him as the focus of every panel with a look on his face that seems to be pleading for an end to it all. Opening on the corpses face, Simmons depicts him deeply in pain. His only visible eye seems to almost be crying, all the while as his coroners argue overhead. This emotion is actualized with a clenched hand that looks to be shouting for help to a group that never wanted to help him in the first place, only discuss his suffering in the abstract. Even in a moment of empathy, when one figure says "At least we know his suffering is over" the statement is only used to launch into the next argument, not mourn what had happened to the man.

You can purchase 'Flayed Corpse', by Josh Simmons, at the Oily Comics website here.
* This post originally appeared on The Chemical Box
Posted by Shawn Starr at 2:25 PM