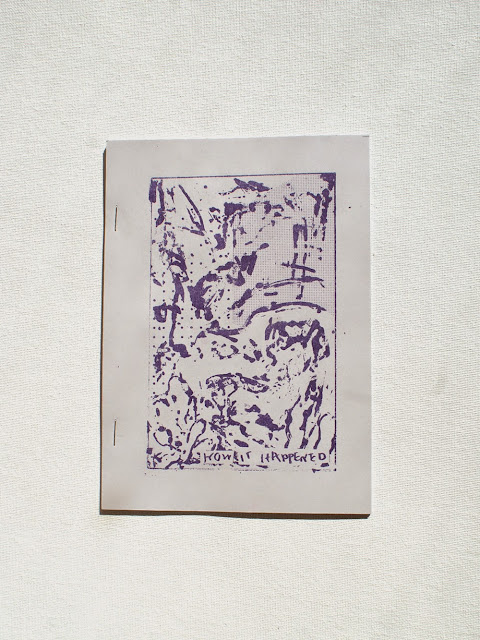 How It Happened
by Jason T. Miles

Touch, I keep coming back that word after reading Jason T. Miles newest release How It Happened. A mini comic in the truest sense of the word, risographed and printed on grey paper with purple ink How It Happened revolves around a visit to an artist's studio by a long time fan, but its the fandoms touch that overtakes the work. Miles artwork clashes with itself, varying between heavy brushstrokes creating nearly abstract imagery, to lines inked with precision and care, but the battle these two styles are fighting isn’t over space but rather authorial ownership.


Much like the very cover of the book (that you are holding), human touch, human commodification and the creation of mass art creates a messiness inherent to the object. A risograph comic will have its ink smudged even after its dried. A slight fold by the postman irrevocably changes the book. A spilt drink, a moldy home, a hungry dog, a licked finger all change the physical object in ways the creator could never intend. That is why the front cover is barely recognizable as anything outside of a series of ink splotches, which change context every time you look at them (is that an eye? a flower? a figure?) because the work changes in an infinite number of ways between one breathe and the next.


A bookcase filled with leafed over zines has a waviness to its composition. Blotches of ink appear to be placed haphazardly between the lines that create the image of a bookshelf; making a vaporous approximation of a series of book spines placed next to each other. When pulling a random comic off the shelf the grid shifts with every movement of the hand. Nothing is defined. Not even the idea of a book.


Original art, sitting perfectly framed on the author's wall, retains its rigidness of creation because of its classification as “not to touch”. One cannot reproduce an original because it is just that, an original. The Heisenberg Effect posits that once something is observed it is irrevocably changed, the same idea exists with an original and a reproduction, each reproduction, however skillfully done, loses something of the original; it becomes murky with the fingerprints of the other, the other artist, the other photographer, the other machine.


Even the encounter between the fan and the creator becomes murkier with each passing page, as the idealized version of the meeting becomes the actualized, as beer is drank, weed is smoked, zines are flipped through and the end is reached.

It is changed. By touch. By consumption. By life.