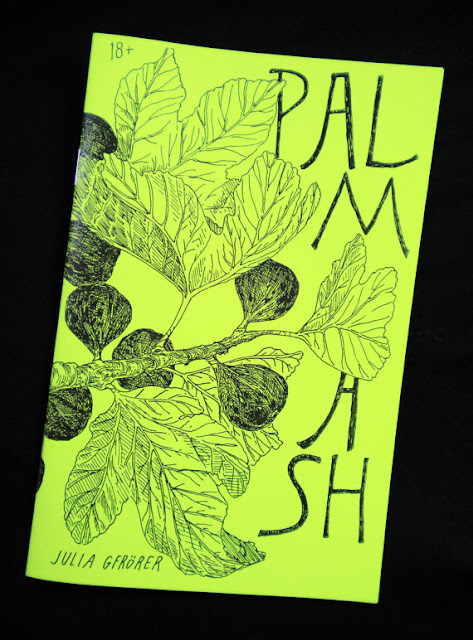 Gfrorer has always been light on backgrounds; choosing to allow her characters to take center stage within her panels, instead of allowing other details to distract from them. Palm Ash is no different, but here their scarcity reveals the class systems inherent in Roman culture. With a claustrophobic nine panel grid the narrative takes place in large part underneath the Roman Colosseum, within its dungeons and slave quarters. Everything is so cramped and tight that the walls fade away for sheer lack of space. It is only the barriers to the outside world that are given any detail. The heavy wooden doors and barred windows that hold them inside. These barriers do give the inhabitants of the world  beneath the coliseum a brief view of the outside world, it is not a view of freedom they see though, but rather a front row seat to the atrocities that befall those who attempt to break free from their captivity.

It is due to this station of life that Dia sees the martyr, and his religion of freedom of the mind, as a possible escape; and conversely why the Roman State and Drusus see it as something to counter, to crush.  As long as martyrs are turned into playthings for packs of hungry lions their god is insignificant. Martyrs do not create more martyrs when they are mauled by lions. Or so the thought goes. That is what makes the martyr in this stories survival, after five rounds with a pack of lions, so enticing to Dia. She sees a glimmer of hope in his way, and while it won't be in this life, for that life is bound by doors and windows composed of metal bars, in the next life she and her son may be given some modicum of freedom.

This thought of possible freedom leads us into Palm Ashes final sequence, which unfolds as quickly and violently as it is alluded too. Following the discovery of Dia’s attempted baptism of her son, at the hands of the martyr, her master sets out to systematically destroy everything around her. Screaming “you belong to me” as he amputates her arm and then precedes to beat the martyr with its bloody stump. The only thing that seems to stop him from killing the martyr is one of his guards informing him that the lions are ready. To satiate his bloodlust though he also sends Dia’s newly baptized son to the coliseums floor to face the hungry pack of lions.

It isn’t shown if Dia’s son or the martyr survive. The final page only shows Dia’s face, as she drags herself to the barred window that looks out onto the coliseums floor. Her eyes and mouth give off a smirk, but it isn't certain if that smirk means her son’s death, and thus his being reborn into the kingdom of god, or his survival. There are as many tales of saints be eaten by lions as there are of them being saved from lions.

So the horror is yours to read into it or not, which makes it all the more horrible.