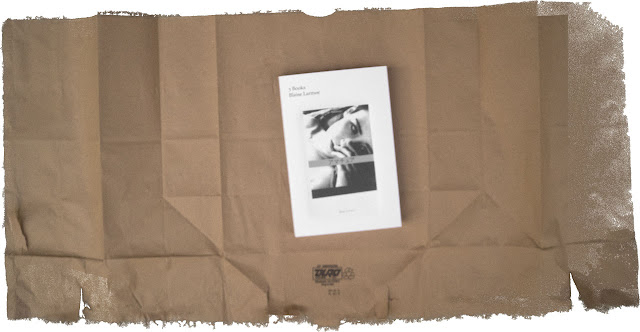 When you first open Blaise Larmee’s 3 Books you feel the spine crack. Adhesive separates and an unfamiliar noise from a new book is made. The cover and spine fold out as one single entity. You are left feeling like you broke your copy based on the first physical touch laid upon it.  The thought that the book is so fragile an object of art that even opening it is enough to cause the book to self-destruct in your hands rings through your head, and then you look at the nakedness of the spine and sense that their is a purpose behind this break.


The inside front cover has a stamp that reads “The New York Public Library” and it makes you feel a sense of collective involvement. Like a streaming sex show in a public library 3 Books keeps the reader at a distance, but begs them to actively participate in the intimacy of the moment.


[This book is dedicated to you.]


The narrative of 3 Books revolves around an art show that never came to be. Books are seized, people are blacklisted, artists flee to europe, fans have their virginity taken and and and… it doesn’t really matter.

Nudes opens the book. A series of quick sketches made with markers on photo-copy paper. The dialogue-less images are drawn from the artist's memories of the previous night spent with a fan/lover. That is if the intro is to believed. [It shouldn’t.] Nudes is the rawest of the book's three stories, but it sets the null-hypothesis of intimacy for the rest of the books to vary from. Its drawings are immediate and sensual.The figures, whether by themselves or together, seem at all times to be trying to pull themselves together. Struggling between themselves to become one single entity.


Both the front and back of each page in Nudes is shown, so that the bleed through from the markers on the previous page create an inverse image on the page's back. The shapes on the front take on an almost abstract imagery in these bleed throughs. As lines drift and ink washes fade away there is no longer a beginning or end to these figures. Shapes are lost and figures are obscured, they become both the beast with two backs and the beast with a billion.


[The further you make it the more you feel the spine slipping between your fingers.] 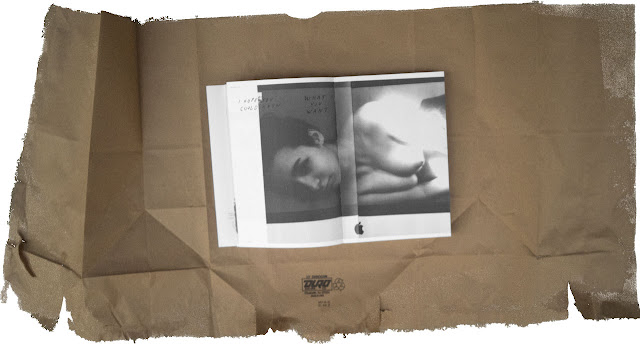 
Each page has a handwritten message written over the image. The intro says these are passages from a “detached letter” the book's original collected edition came with. Which means it was written after the moments displayed, but every inflection and moment of honestness in the letter is met with a reaction from the image. Each line reads like a love letter, and each reaction reads like the reaction someone being read a love letter makes. 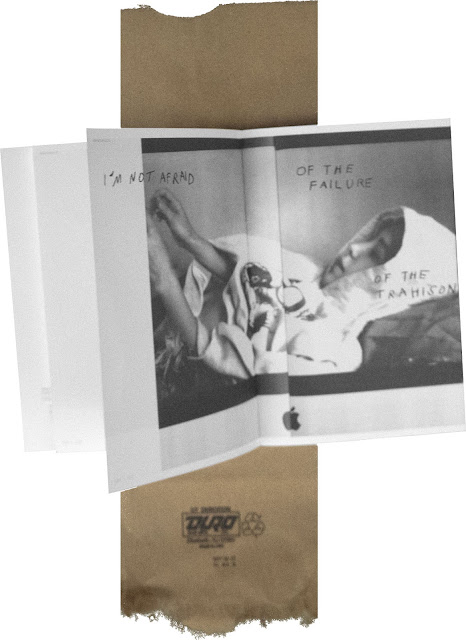 The intersection of words and image are at the center of this section. While supposedly separated in time, the medium of comics creates only a now between image and word. They become a single moment in the reader's mind, not two separate strands operating at two separate times. A detachable letter may have accomplished this, but in Amateurs image and text become one. Comics are a medium of synthesis so, wanted or not, connections are made and time becomes one single entity within a panel.


There's something beautiful about that relation between words and images on the comics page. Words written impact images drawn and images drawn impact words written. So that words written in Amateurs and the reactions of the woman displayed create their own level of sincerity for the reader to “read” into. Moments of possible truth are both met with smiles and laughs, an exchange is taking place too intimate for anyone not involved in it to understand, but Blaise allows us to try.


Even the lack of words is important, the awkward shift of a hip during a lapse in conversation. The raise of an eyebrow as a sentence lingers past the point a period should have appeared. The interplay never ends, written or not. 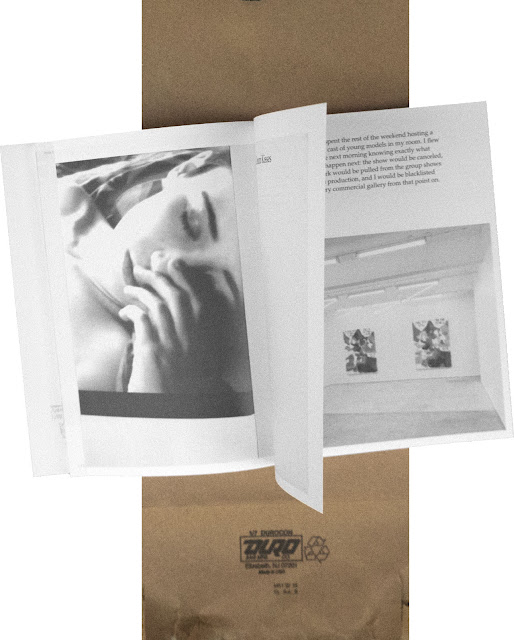 
Nudes is made up of simple sketches, wordless and based on the memories of the previous night. Amateurs is all words and no drawings. Photos capture the exact moments being referenced, not Larmee’s line. These two explorations of a theme coalesce in Ice Cream Kisses. You see both the passion and immediacy of Larmee’s line from Amateurs but also his ability to convey the intimacy of a moment through his words.


But while Larmee takes the strengths of his previous works he also zero’s in on other aspects of his work. Amateurs distances the reader by framing its images in an iMac screen, Ice Cream Kisses inverts this idea, taking the digital and making it analogue. Photos followed paintings, and here paintings follow photos. 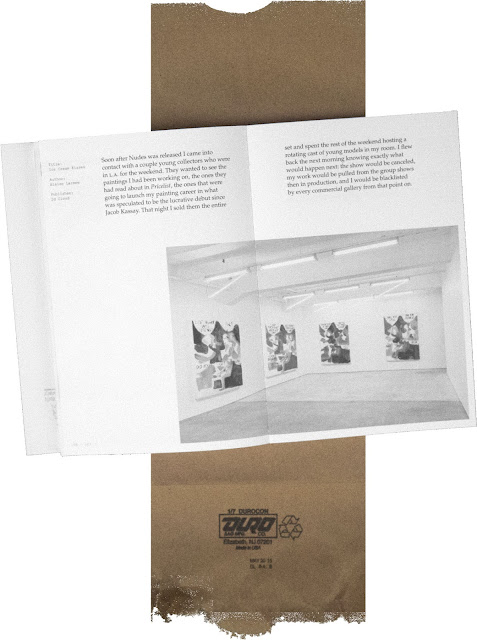 Every “painting” shown in Ice Cream Kisses is displayed as if it was being shown in a gallery. This framing device forces the reader to "stand" a respectful distance from the art and to “view” each piece as a single entity. Randomly in the narrative you will come across a painting flanked on its right or left side by a blank page, it isn't until a few occurrences that you recognize these aren’t blank pages, but blank walls in the gallery that you are walking through.


The dialogue reads like a transcription of phone sex. (Or Skype sex.) Acts are stated in the form of directions, with body parts given precise descriptions of what will happen to them and in what order it will happen. It reads as clear, descriptive and moves with passion. You almost start skipping words so you can make it to the next one quicker.


What is shown though veers from the pure-abstraction of shapes and colors to the merly somewhat abstract. Toni Morrison, while talking about writing sex scenes in The Paris Review, stated: “Sex is difficult to write about because it’s just not sexy enough. The only way to write about it is not to write much. Let the reader bring his own sexuality into the text” By holding back on the representative nature of his art Larmee is allowing the reader to project their own ideas, under slight suggestions based on the dialogue, onto the images being shown. It turns you into an active participant in the narrative, rather than a passive observer.


3 Books is the most intimate comic i have ever read. It is also a comic in which every artistic choice is based on trying to undercut that intimacy. To distance the reader from what's on the page and maybe even make a joke of it. But it is never fully is capable of this. The love underlying every word written and line drawn is too strong.


I have been thumbing through this book ever since i got it in the mail a few months ago and everytime i look at the primarily white cover i see new imperfections. The original indent a random post-worker made in its bottom right corner before it had even reached my suburban stope has become flanked with black marks of unknown origins. The white cover becomes blemished every second it exists outside of the immediate state of its creation. It becomes dirtier with every moment of human interaction. With every second on a dusty nightstand. For a book meant, in part, to distance itself, every blemish its cover invites makes that all a little bit harder.