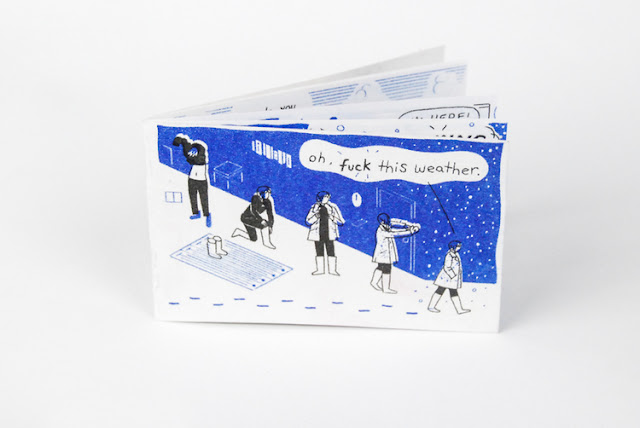 
The cover is actually the first page, and while there are five distinct actions taking place there is not a single panel border. Instead the eye is allowed to move freely from one gesture to the next, as the main character dresses and leaves her apartment. It isn’t until the final action that you refocus and realize the footprints across the bottom of the entire page belongs to the characters final action. This telegraphs the motion between her previous acts more clearly, putting on a shirt, boot’s, a jacket and opening the door that the reader had previously projected their own timing onto. By showing footprints under them though Foster-Dimino creates a second time stamp. Her own motion and timing that disrupts yours, steps instead of gestures.


In it’s economy of size Foster-Dimino refuses to create an economy of scale. Pages, layouts and moments feel as large as the broadsheets in Building Stories, and still as intimate as a  handmade mini.


Like the format, the plot of Oh, Fuck This Weather is small, a woman walks from her apartment to her girlfriends as the temperature outside nears zero. Foster-Dimino uses the woman's gripping about walking in the cold as a way of endearing the character to the reader. After a particularly nasty winter this year, it seems difficult that anyone would not feel a sense of connection with the main character. Even as the complaints mount, it’s clear she is going through with it because she cares for the person she is meeting. By joining these two thoughts, natural cold and the warmth of love (and a bath) the reader identifies immediately with the characters, it may be based on a small moment or thought, it is a universal small moment and thought.