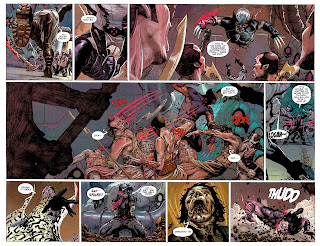 Uncanny X-Force released 14 issues this year, rotating between six artists to keep up a semi-bi-monthly schedule. For any book not written by Brian Michael Bendis and drawn by Mark Bagley that's some massive  output – and unlike most Bendis books, Uncanny X-Force never dabbled in decompression, it knocked out its first arc in 4 issues, following that up with a 3 issue arc, 3 one shots, and culminated in a 9 issue mega arc. Uncanny X-Force was a freight train no one was going to stop.
How does a book producing at this rate continue to be one of the best on the shelves? Remender's hands are all over it, and Jerome Opena provides some of the best pencils in the industry, but the real hero of Uncanny X-Force? That's Dean White.
While most books are able to retain a certain level of consistency by employing strong inker's able to mold fill-in artists into something resembling the main artists style. Uncanny X-Force though goes a different route, colorist Dean White provides a painterly quality to the art making even the most sub-par pencils resemble Jerome Opena's. This allows every issue of Uncanny X-Force to retain its consistency. 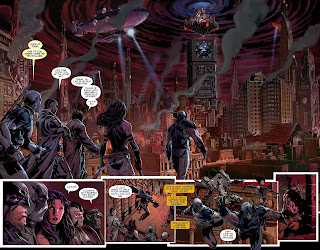 I don't think anyone will contend Max Brooks is on the same level as Opena, but when colored by Dean White? The absence of Opena becomes almost bearable. 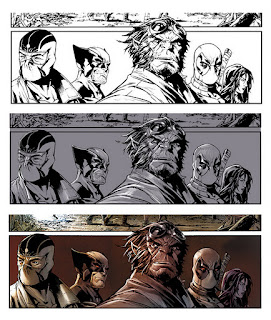 White can even turn Billy Tan into a well functioning member of Team X-Force. 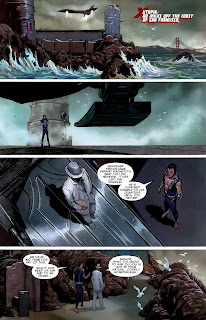 Not bad, right? Certainty not Opena or Brooks, but a solid contribution to the series. Now one might think this is Billy Tan stepping up his game, putting in the time to play with the big boys, but its all White.
See Billy Tan was the one artist on the series colored by both White and a fill-in colorist (I didn't know those existed or mattered until this book). 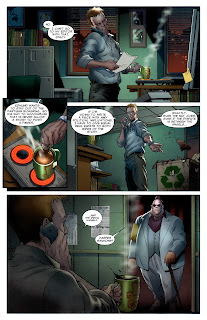 Paul Mounts abandons Whites color palette in this issue, instead choosing a overly-rendered style that is all to rampant in the industry. This complete shift in coloring scheme turns Uncanny X Force 10 into a odd step child, while it continues  to push the overall narrative forward, it loses the artistic continuity which had held the previous 11 issues together through their fill in artists. Issue 10 is the first and only issue to drop White's colors (issues 5-7 had a different colorist but maintained the same palette) causing it to feel, if not read, as the series first true "fill in" .
Remender can pump out brilliant scripts all day, producing a cohesive narrative from start to finish, but sub-par fill in artists will always cause a disconnect in the overall narrative. Few inkers, and ever fewer colorists are capable of stopping this from occurring, but you know who is ? Dean White.
Citations/Footnotes/Whatnot
-All artwork is from Uncanny X-Force, by Jerome Opena, Mark Brooks, and Billy Tan

- Dean Whites Deviant Art Page http://deanwhite.deviantart.com/gallery/ (where one image is from)
-I wonder if DC put a competent colorist on Philip Tans arc of Batman and Robin if it could have been saved

EDIT-  I should mention Matt Wilson's work on issues 5-7, while not on par with White - Wilson successfully apes White's color palette creating a cohesion between his work and Whites (although he loses a lot of the subtle painterly qualities found in White work). Like Brooks he's a competent fill in, while we all wait for the stars to return.
Posted by Shawn Starr at 1:26 PM