I read a lot of books this week, an excessive amount really.So i figured id share a couple things that caught my eye. 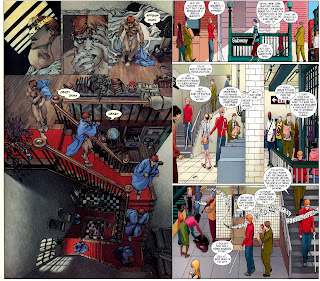 I reread Elektra: Lives Again and what jumped out at me from previous readings was Millers use of layout. Miller was doing things with the art on Daredevil that took 20 years and the talents of Marcos Martin for comics to catch up with. Be it Millers use of Colors (DKR/DKSA) or his use of Manga / European sensibilities (Ronin), Miller has always been ahead of the curve. Maybe in 2032 Marvel will release Holy Devil to overwhelming praise. 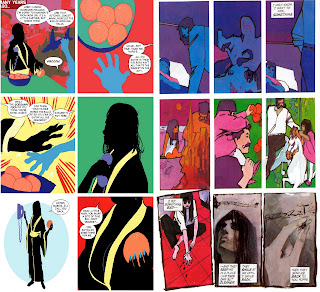 I love Kyle Baker, and coloring Deadpool's childhood in homage to Bill Sienkiewicz's Elektra Assassin is genius. Alone its a dynamic use of color, but by tying itself to Elektra Assassin Baker ties himself with the Elektra Assasian legacy, breaking with Marvels and comics as a wholes conceptions of art each book pushes the limits of comics as an art. Nothing has ever looked like Elektra Assassin and nothing looks like Deadpool MAX,which is a shame.

If anyone in comics could replicate this level of artistry I would gladly read a 200 page S&M comic by them, but all we seem to get are overly rendered TNA comics were Batman and Catwoman fuck. 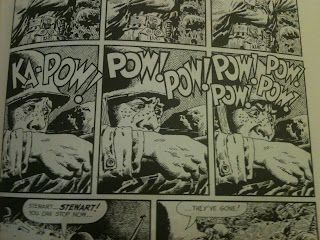 This is from the Fantagraphics reprint of Blazing Combat, while the 4 issue series is blessed with a stable of legendary artists (Wood/Toth) the highlight is a 7 page short story drawn by John Severin. Telling the story of a "green" soldier sent to the front lines who goes insane after his first scrape with the enemy, this 3 panel sequence though makes the rest of the story seem like filler.
Posted by Shawn Starr at 5:56 PM