Ultimate Death of Fear Crisis Itself!

Fear Itself is the quintessential event comic, an untold prophecy which dooms Earth brings together Marvels mightiest heroes (specifically Thor and Captain America. Just in time for their movies!), Odin gets to be a dick and all the Nazi robots the “Age of Awesome” demands can appear! The failure of Fear Itself though is one which plagues the “Age of Awesome” its all concept and no execution. Fear Itself is a event by checklist, hollow and ultimately meaningless; it lacks any clear villain, stakes, and ultimately hero's – except maybe Thor (kinda).

Whats the point?
Marvel needed a summer event!
Thor had a movie coming out!
Stuart Immonen needed to show everyone how you draw an event comic, son!
It was Fractions turn!
Lack of Hammer centered villains?
............
That's all i got.

Final Crisis began with the realization of Kirby's New Gods prophecy, Darkseid
won – Evil incarnate stood unopposed and fixed his gaze on Earth. Fraction, seeing a lack of cosmic menaces in Thor's rogue gallery, takes a trick out of the ol' “Age of Awesome” playbook*, creating Evil Odin! This cliff notes version allows immediate reader recognition (who is that guy? Oh he's Evil Odin) but lacks the history. Its character development by approximation. 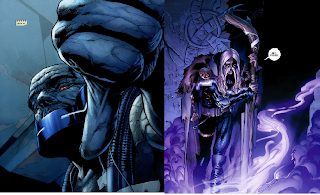 These are the introductions of Darkseid and The Serpent, in one some guy is slumped over going on about being the All-Father (which in 7 issues isn't expanded on past that page). In the other Darkseid dooms Earth with one hand motion. Decades were devoted to make the reader aware of Darkseid's threat, 3 pages of exposition were used to introduce The Serpent. Theirs a difference, but few writers seem to notice in the "Age of Awesome".

The ultimate failure of Fear Itself is in defining a threat. The Serpent, who we are lead to believe is the primary antagonist, is weak at best. His primary action involves possessing various heroes and villains and commanding them to go on global temper tantrums (with Hammers! just like Thor!). Sin and the Worthy while capable of causing a mild ruckus and defeating unorganized response teams* became easily dispatched by issue 5 (Thor defeated both The Thing and Hulk by himself) and  useless by Issue 7 where Cap held The Serpent, Sin, 3 members of the Worthy, and a squad of Nazi robots off till the avengers got their shit together. The plot no longer called for their competence i guess.The Serpents ultimate act of evil, the destruction of Paris, doesn't even make it out of the main series before being retconned.

So who is the threat? I don't know, my guess is Odin. Odin refers to The Serpent not as his opposite, but his absence. In  the pages of Fear Itself we are shown that the absence of Odin is probably a good thing though. Odin, not The Serpent, is the main threat towards Earth, standing on the rainbow bridge with a horde ready to raze the planet if the Avengers fail. In one issue alone Odin abandons Earth, beats Thor to a pulp. takes Thor prisoner, and builds a army to destroy Earth. Odin is also a serious dick.

The conclusion of Fear Itself  further complicates this. Following the death of Thor (for one issue) Odin takes his brothers corpse and returns to Asgard alone. If The Serpent is Odin's absence, doesn't Odin's self imposed exile mean The Serpent won?
Threat of Prophecy

Odin's prophecy deflates the stakes of Fear Itself even further, in Issue #4 we learn that when the Serpent and Thor fight, both will die. Odin knows this, Thor knows this, The Serpent knows this, we the reader know this. Fraction admits in a post-event interview “Rather than insult everyone's intelligence who, like us, have been reading superhero comics since recorded time, why not spare us all the theatrics of pretending that Thor and Captain America — the stars of The Avengers, opening May 4, 2012, in a theater near you — are dead in any way differently that they have been dead before “. So Thor is going to die, but not for reals - i mean come on what are your a dummy? huh reader?  We all knew  that Thor, a Intellectual Property with a movie deal, was not going to die (according to Fraction at least). If Thor's not going to die, then what are the stakes? Thor just needs to beat some guy up called The Serpent and take a nap for a couple days.

The problem with prophecies in event comics is they tell  the reader the conclusion.  Blackest Night ran into this problem to, but John's was smart enough to work around it (i mean who would ever think of destroying the DCU?) to provide some surprises (not magicking up every dead DCU heroes, just some). Fraction just rides the event train to its logical and prophesied conclusion. 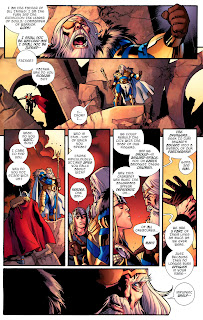 A prominent theme of Fear Itself is the relationship between gods and men. Fraction unlike Morrison doesn't want to elevate man into godhood, he wants to take the gods down a peg, reveal them for the monsters they are. Twice Thor is asked if he is  sides with Man or God, and twice he chooses mankind. The problem with this choice though, is that for all the faults Fraction shows in the gods, his version of mankind just as bad. Issue one kicks off with mankind gripped in xenophobia, racism, violence, etc and it only gets worse from their.* 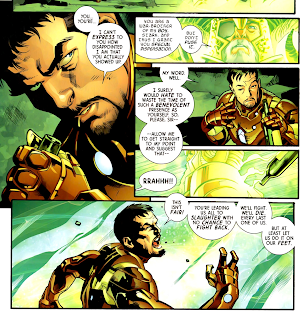 Tony Stark berates Odin, then complains about  it not being fair. Iron Man is supposed to be arrogant, but if Fraction wants to tear down the gods, having mankind act like petulant children isn't the way. 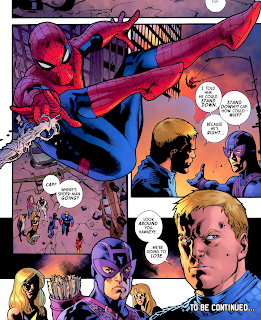 Even spider man, a character made famous for his “just like us” mentality abandons the Avengers under Fractions guise.

With the gods and heroes torn down why does Thor chose mankind? I'm still not sure. The plot called for it I guess (that seems to be a running theme). Even the “uplifting” ending where the citizens of Broxton come to the Avengers aide comes after the locals kick Thor out and abandon Cap.

While these are the low points the second act calls for, theirs a difference between having your characters struggle and them giving up. At no point does Cap give a rousing speech  in the face of impossible odds, he just mutters "AVENGERS ASSEMBLE" once a issue to diminishing returns. 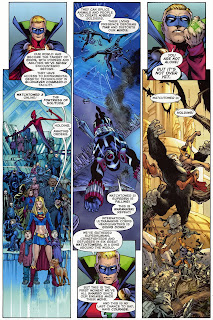 Thor's ultimate sacrifice is a battle between gods, but the outcome is known by both combatants. What kind of sacrifice is that compared to a man standing in front of ultimate evil and choosing not to blink. 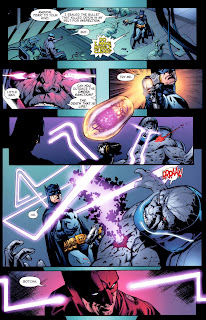 Final Crisis is a far bleaker book than Fear Itself could ever be, the entire population is enslaved, the heroes are lost, and the entire Multiverse is at stake, but even with all of this going on everyone remains a hero. The same cannot be said for Fear Itself, where no one is a hero.

"Maybe it worked, maybe it didn't work, maybe crossovers need to be punches and explosions and the black guy dies and a woman loses her powers and we all persevere into the next bold morning. I don't know. I think event comics can be more than that formula." - Matt Fraction (2011)

1-This idea is stolen from Sean Switzke, I cant find the specific article but its totally stolen from him. If you find the article though you should read it, its quite good. Examples can be found in Immortal Iron Fist, Jason Aarons Ghost Rider, Green Lantern etc
2- Images are from Final Crisis and Fear Itself. you can figure out which is which.
3- As the Wait! What? Crew pointed out Caps first encounter with Sin was predicated by him jumping out of a plane after telling his subordinates to figure it out.
4- Immonen was a fantastic art choice, making this book far better than it deserved.
5- The "Age of Awesome" is Chad Nevett's name for our current "age" im stealing that too.
6- I'm still  uncertain if The Serpent caused a increase in human sensitivity or if it was all  man - i think the latter is likely since Fraction uses a double page spread to rule out a 3rd party (FI#1). Fraction also has "ripped" from the headlines news bulletins throughout the book. meant  to show a increase in fear, something i doubt a Norse God is causing in our world.

-All interview segments are from Newsarama , which can be read here: http://www.newsarama.com/comics/facing-fear-fear-itself-aftermath-111208.html
although I would advice against it, its kind of a depressing look at Fractions current mindset