Just Words on top of Pictures #1 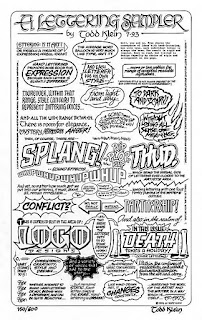 Lettering has become a lost art. The goal of the letterer is never to be noticed, and unless something is seriously wrong they never are. This outlook fails to recognize the importance their craft has on the page, the moment a word balloon is placed the page is irrevocably changed " a page of comics without text has its own personality. But when you add the balloons, it suddenly takes up a whole, new different look" (Moebius). Pages are conceived and crafted without recognizing these new elements "when you’re looking at the composition of a lot of comic pages, it’s like you can appreciate it only if you imagine the page without the word balloons"(Dash Shaw) making even the most well crafted page incomplete. The advent of digital lettering has caused this artistic disconnect to become even more rampant, what was once crafted onto the page by hand (providing some fluidity between the two elements) is now accomplished with a simple copy / paste in Photoshop, removing any connection the letterer may have felt to the work.
Art by Photoshop has become the industry standard, while many pencilers still work on paper, the artwork they produce will never leave their studios; these pages are scanned and emailed off to their editors, colorists, letterers, and inkers. Now i want to focus on lettering here, but every element of the page effects one another, the negative space of word balloon effects the overall color, the font is another line that must be accounted for by the inker. The word balloon brings together every aspect of the page, but few letterers grasp its importance.
Font is only used to differentiate the crazy character (who's word balloons are scratchy) from the artsy one (calligraphy), word balloons are colored not to match the color scheme, but to allow the reader to understand which of the 23 characters is speaking in a voice over.
Coloring the Bubble
The godfather of comic lettering is without a doubt Todd Klein, winner of 16 out of 19 Eisner Awards for lettering losing only to Chris Ware, David Mazzucchelli, and Stan Sakai, pretty solid company. So why's Klein such hot shit? Well lets look at his magnum opus (if a letterer can be said to have a magnum opus) Sandman.
Klein provides each member of The Endless with a unique word balloon design; utilizing different colors, fonts, and balloon structure to complement each characters personality / aesthetic. This allows for easy character recognition, a common problem in books with large casts . More importantly though, these balloons create a cohesion with the color few books have ever achieved. Each member of The Endless has a unique color makeup (Dream is draped in black, Despair is a blob of white, Delirium drips of color)  if Klein's word balloons were not present, to create balance on the page, each cast members appearance would wreak havoc on the pages. 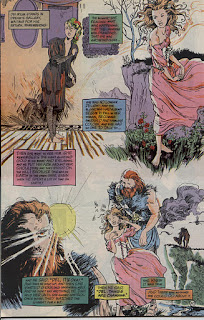 Delirium's word balloons allow her "fantastical" color scheme to blend with the surrounding environment, creating an overall cohesion. Without this color scheme, Deliriums neon hair would be impossible to balance out on the page. The above image is a prime example, dramatic color shits occur between each panel, the pink of Delirium's dress, the yellow sun, Destruction's red hair, green mountain ranges,these changes in color though are all incorporated and balanced out by Klein's balloons.The drab brown wall found in the first panel i even taken into account.

Few letterers are able or competent enough to do this, the best example I could find is in the coloring Tour De Force Butcher Baker the Righteous Maker. The first clue that thought is going into the word balloons is their placement, The Absolutly's balloon is a full quarter page away from "him", this makes sense when you look at the coloring though. The Absolutly's (figure on the left) word balloon balances out the dark wreckage scattered on the ground (hence its extreme distance), by providing a equally dark aerial object (this is done on the opposite side of the page by a darkened smoke cloud) the pages color symmetry is kept intact. Jihad Jone's (figure on the right) word balloon is used as a transition between the sky and the glow of the  fire, his blue font and red word balloon, placed right where the two colors meet provide a bridge. 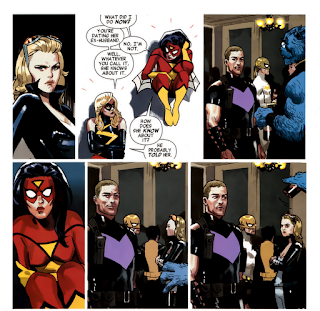 So who else out their is providing fantastic lettering? No one i can find* but i thought it prudent to point out an artist who's been able to get around this fact. Daniel Acuna (both the penciler and colorist) devises a interesting way to remove the effects of word balloons on his panels. In dialogue heavy panels Acuna leaves the background white, this allows word balloons to be placed anywhere (and not blocking his wonderful backgrounds) while not affecting on his overall color scheme. Acuna, unlike many artists is able to compose the page with the word balloons in mind. 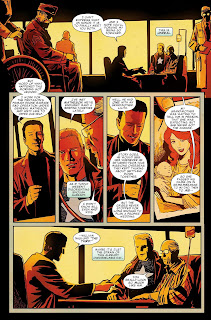 Sadly, even the most competent artist/colorist will eventually have to face facts, in the "age of Photoshop" no matter how you lay a page out and how subtlety you color it, once in the hands of a incompetent letterer its over. Francesco Francavilla given a "talking heads" scene draws the hell out of it, but word balloon after word balloon are thrown on until the page is ruined. These white holes burn through the page, removing all the craft and thought of the pencil/color.
Citations/Footnotes/What Not
1- Color in word balloons may have appeared before Klein (i don't know 100% and im to lazy to look) but his use of it to complement the coloring on the page was a breakthrough.
2- Eddie Campbells article on Exit Wounds discusses letter far better than anything i could ever come up with http://eddiecampbell.blogspot.com/2009/10/i-n-exit-wounds-rutu-modan-gives-me.html
3-Theirs some Indie artist doing hand lettering thats supurb but my main point is that the mainstream has no-one.
Images From:
http://kleinletters.com/BuyLSBW.html
Sandman
Butcher Baker the Righteous Maker 2
Avengers 18
Captain America and Bucky
Posted by Shawn Starr at 2:39 PM