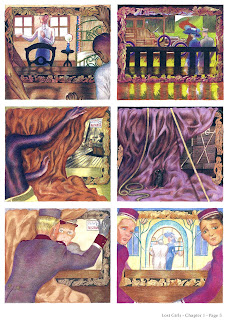 Its the last article, below the thing about how awesome covers are.

This week i had one of those special moments with comics, those moments when you sit down with a stack of books and realize there all connected, a narrative theme of sorts, between books published years, if not decades apart, spanning continents, and starring wildly different creative teams. Its a connection no one else will ever have, because no one will read these books the same way. Its something the disposable nature of comics facilitates. Film is precious, novels are archived, music is digitized, comics are thrown away and forgotten. What can easily be found in any other medium, The Film Brats, The Beatniks, is rare in comics, any thematic struggle between creators needs to be fleshed out and searched for. It's not until the past decade or two that this has even became a possibility, due to the recent archival nature many publishers have undertaken.

Finding Lost Girls and Gullivera, within moments of each other, was my first true find in this area. Theirs several other examples, Alan Moore and Frank Miller struggling to injecting realism into the mainstream, the Fort Thunder Collective redefining art comics, but those have been milled over and dissected to death. Their obvious. But this one, this ones just two guys, on different continents, unaware of each other, doing the exact same thing in completely different ways. It's refreshing, at least to me.

That's probably why I wrote 1,200 words on it, ignoring anything that could conceivably be considered a word count. Sorry Alec, but when that thought hits, it hits, and you have to keep on it. I'm still thinking about it, wanting to expand on the original thought, and one day i may find something else to add to it, I hope I can, but for now, this addendum will have to suffice.
Posted by Shawn Starr at 4:53 PM