This World is an Open Door

When Rob Liefeld relaunched his Extreme imprint this year he made a point of sticking with the original numbering. Initially scene as a jab at the recent DC relaunch and Marvels constant barrage of re-numberings, but as the line rolled out, its become apparent that Liefeld's hesitance to relaunch the line with #1 issues stems from the line actually not featuring any #1 issues (with one exception*). It became clear that these launch titles were beholden to what has come before, with Glory #25 though, Keatinges begins to buck that trend.

As well crafted as Glory #23 is, Joe Keatinge's use of expository text in an attempt to bring an unfamiliar readership up to date with twenty-two issues worth of continuity, felt clunky. This also occurred in Bloodstrike #26, making a book about a top-secret-reincarnated-mercenary fighting techno-zombies into 15 pages of psychiatric exposition, with 7 pages of action thrown in. Keatinge's wasn't as heavy handed in his use of text, but his first two issues read  like an extended recap, with sprinkles of future plots scattered throughout, aided by artists Ross Campbell these tidbits of plot where enough to keep the book interesting, if not a tad laborious to read. 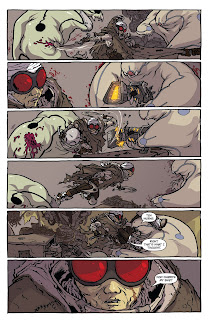 The influence of Prophet on Glory #25 is striking, by placing their protagonist in the distant future Brandon Graham and Simon Roy were able to avoid continuity updates which plagued the line. Similarly, Keatinge places Glory and Riley five hundred years into the future, on a different planet.  This time jump allows Keatinge's and Campbell to begin filling the reader in on their own continuity, not Liefeld's, and signal's a new direction for the book.

Where Keatinge's differentiates himself from Graham is his character work*, over the course of a fireside talk we see how Riley's youthful exuberance was shed following Glory's departure from earth, turning her into a run down warrior at the end of her life. Focusing on the character dynamics between Glory and Riley, Keatinge uses dialogue sparingly, avoiding overwriting the scenes, instead trusting his artist to sell the reader on the moment. Which Campbell accomplishes with ease.What felt like expository conversations in the previous issues, reads like two old friends catching up, trying to figure out how it all went so wrong. It may be a familiarization with the characters that causes this, but there's a warmth and flow to the dialogue that was absent in previous issues. 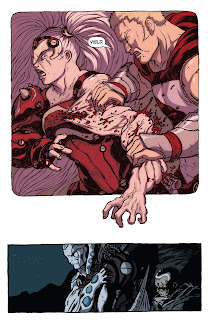 Campbell, since his first issue on Glory, has redefined the look of superhero comics,and this issue is no exception. Be it a busy alien market, a kinetic action sequence, or a heartbreaking moment of release, Campbell forces the reader to study his pages. One of the most chilling moments** involves Glory's arm being broken, while the initial panel consumes 3/4's of the page, the second panel focuses on Glory as she braces her arm,this image lingers onto the next page as the memory dissipates, its a perfect use of the page turn. Using the time jump inherent in the turning of a page by the reader, to reinforce the passage of time for a character.

Shinning a light on what could be, rather than what has been, Glory #25 is the break out issue of the Extreme Relaunch. Continuing Glory as it has always been is no longer an option, because we know how that story ends, and its not a happy ending. With this issue Joe Keatinge takes the reigns of this book and, we hope, steers it in a direction which will make Glory #25 a forgotten dream, and not a foreshadow of whats to come.

Citations/Footnotes/General-What-Not
* Prophet
**This isn't a fault or a critique of Prophet, the book doesn't concern itself with characterization, operating instead as a sci-fi Conan comic. And who wants to read a self reflective Conan comic? ****
*** The other is a major spoiler so I'm not talking about it.
****Not me.
Posted by Shawn Starr at 10:55 AM