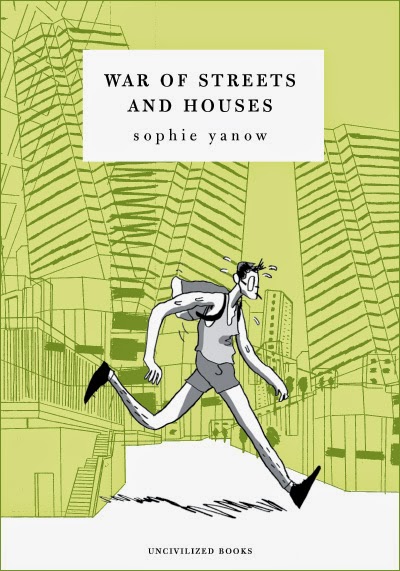 “A city is built where previously there was nothing. How is it built?”

War of Streets and Houses is about the grid, both its absence and the intrusiveness of it. The grid of the city, the grid of a prison cell, the grid of nature. By choosing to discuss this topic in comics though, Yanow runs into one more grid that she must contend with, the comics grid. 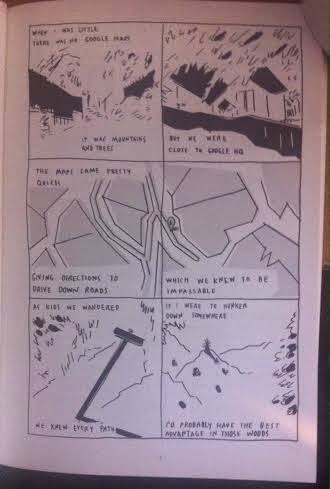 “The Grid is God” Frank Santoro would tell you, who sports a nice pull quote on the back of this book, and I wouldn’t think it much of a stretch to say that most people would agree with that sentiment. If it’s good enough for Kirby and so on and so forth. But that sentiment is also one she is combating when talking about the city, it is a structure that can exist, but not in an oppressive and homogenized state.


Yanow works primarily within the six panel (or three tier) grid. But she is not beholden to it. Allowing herself instead to subvert the grid, to work around it, or through it, at her leisure. Putting her own personal touch on the format, allowing her line the freedom to move as it wants and not where it must.


The most subtle and, in the context of this work, substantive instance of this is her panel borders. If one were to walk into any comic book shop and pull an issue out of the quarter bin you would find one thing in common across the entire scope of comics, uniform panels, with corners squared and straight lines. Yanows panels though are free drawn, weaving up and down, veering to the right a little or the left.


It is in these inconsistencies that we see the artists hand first and foremost, the nature of her line, rather than the uniformity found at the edge of a ruler. This naturalism goes straight to the heart of War of Streets and Houses, the city/comics grid may have its place, but the eccentricities of the individual community or artist needs to come through first and foremost. Houses can bulge out and side alleys can lead nowhere, just as a line can just bulge out and lead nowhere. 1st, 2nd and 3rd street do not have to be exactly 300 ft between each other, just as each of Yanow’s panels do not have to be exactly 3.25 x 5 inches in size.


Page one flashes between three tiers depicting Yanow’s childhood home in a heavily forested area of California. Switching between intimate street views and cold overhead shots from a Google Maps screen, Yanow comments that even with the advent of Google Maps nature eludes the mapping of her hometown by satellites. Streets that are supposed to be there are suddenly made dead ends by fallen trees and mudslides made only accessible from roads not marked on any map. The area belongs to the forest and the people. Not the state. It requires an intimate knowledge to traverse that only comes through living in it. 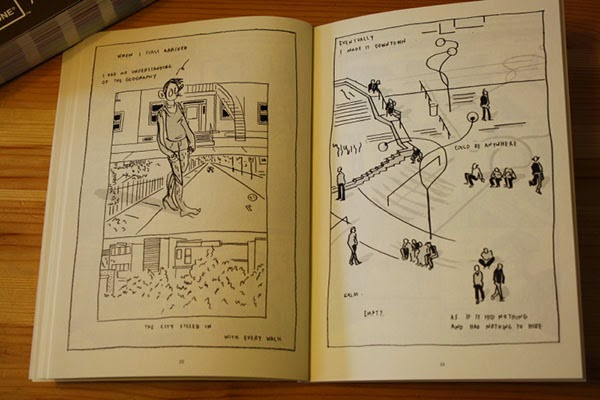 While I said above that Yanow works within a specific grid/tier, and by and large this is true, Yanow also chooses sporadically to break away from these. Unconventional layouts pepper this book. The most striking page is found early on, Yanow is talking about not understanding Toronto’s gridded structure upon first moving there. Each time she takes a walk around the city though the blank spots are filled in. This commentary can equally be read as her trying to find her way around her own art, and the structure of comics, as this page is deliberately constructed in a way that breaks a comics “rule”.


Ben Marra wrote a series of process posts labelled “The Marra Method: Traditional Comics Techniques for Visual Storytelling” in his eighth post he only has one rule “Never break the panel border…” and in this page Yanow does just that.


The page has three horizontal panels, but is also contained in one greater panel which is occupied by the character of Yanow. Her full body inhabits the space occupied by these three (sub-panels) as she breaks the borders of each of them simultaneously. She is walking through them, filling herself in on the techniques of “comics” as she is also filling herself in on the techniques of the city. She is momentarily lost, or more so intentionally lost, as she begins focusing in on what makes the grid tick. 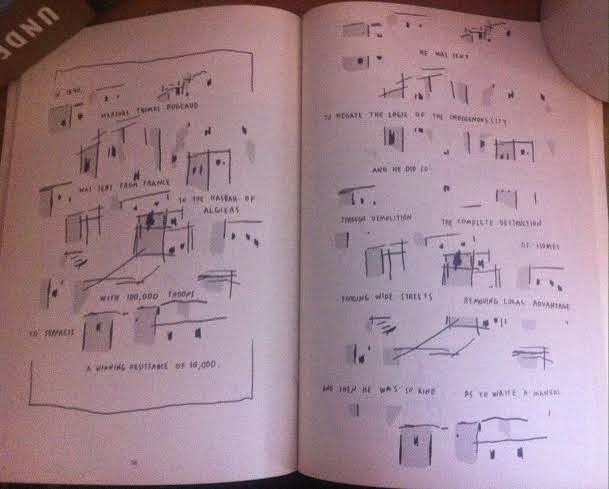 Elsewhere in the book, when Yanow is describing the streets and houses of the Kasbah of Algiers, before an imposed grid of subjugation was given to them by “city planners” (an occupying army), she uses the buildings themselves as the source of her grid. Integrating them into their own story. Their placement guide where the blocks of text are allowed to be placed, and how your eye is allowed to get to them. They create a visual maze that you must absorb and learn from, must fill the blanks in of, or else the words and phrases will read as gibberish. Fragments that won’t ever congeal.


The words on these pages are also chosen precisely, within this maze of buildings is Yanow’s retelling of the first instance of this form of military oriented city planning, in 1840 “Marshal Thomas Bugeaud…was sent to negate the logic of the indigenous city….and he did so through demolition...the complete destruction of the homes...forging wide streets...removing local advantage.” The grid itself is set in juxtaposition to this story, as you learn to appreciate its eccentricities, its tangents, you are simultaneously learning that these are the reason why it was destroyed. To remove the advantage to the indigenous people. 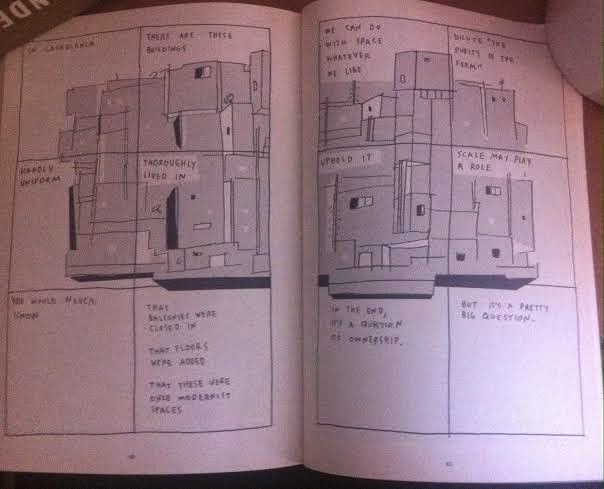 Later, when describing buildings found in the city of Casablanca, Yanow allows the lines of her six panel grid to become integrated into them. They disappear and reappear as they run into extended porches and tacked on rooms. They conform to the building, not the other way around, at times even becoming part of each buildings structure. Yanow explains how these buildings used to be “Modernist spaces”, clean and formal, but the inhabitants transformed them “Balconies were closed off...Floors added” the “Purity of the Form” was ultimately“Diluted” by their inhabitants.


It’s an example of how things can be changed, even when Google Maps is in place, the personal touch will always exist.

You can purchase War of Streets and Houses from Uncivilized Books.
Sophie Yanow’s Tumblr can be found Here and her website Here.