You're Burning Up, I'm Cooling Down 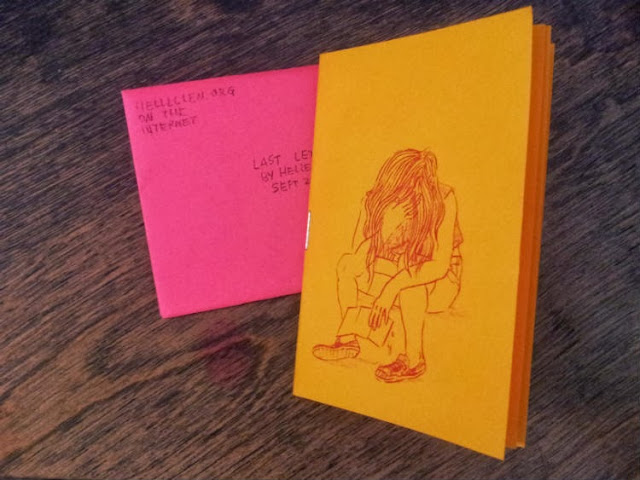 That is the only word one can think of after reading Last Letter. The books design and narrative revolves around destruction and points towards the freeing nature that the act brings about. Last Letter arrives inside a sealed envelope, the return address penciled in by hand reads HELLLLLEN.org / On the Internet, a place where a physical letter can never be returned. One must consume its contents or discard them, but never send them back.

Last Letter has achieved independence from a realm that exists outside of the physical (the internet), and it utilizes this new found existence by bringing the reader into the narrative and creative process through their own physicality. To read Last Letter one must tear open the envelope which it is housed in (not the envelope that it is mailed in, it is physically housed inside a smaller envelope). What could initially be seen as a cute production idea takes on additional meaning though once one actually opens the envelope; inside a small sixteen page silent mini comic is housed. The first image depicts a female sitting on a curb covering her face with one hand as a letter dangles in the other. This first illustration turns the nonchalant red envelope into the cover of the comic and creates a real time prologue to the comic. This prologue is not illustrated by the artist, but instead acted out by the reader as they open the envelope. As harshly or carefully as the reader chooses to open the envelope, the act carries over an energy to the first panel which the artist could never anticipate, but that the work relies on to provide a greater context. One could rip it open like an excited child receiving what they think is a birthday card; or they could open it slowly and methodically, taking great care not to damage the envelope or the letter it contains in anticipation of what they hope will be good news one would want to preserve. Both of these actions, and the multitude of the variations in between them, all lead to the same answer though. A girl slumped over.

The content of the letter is never revealed, the comics title hints that it is a last letter, but from who and concerning what is not divulged or even hinted at. What is depicted though is the nameless female character working through her grief. In sixteen pages, her character cycles through each of the five stages of grief, and on each page that emotion is conveyed clearly and with feeling. Even the journey of the letter is a story in of itself, shifting from being covered in tears, being thrown on the ground in frustration and ultimately shredded and set ablaze. Its journey mirrors the actions of its recipient, as they both move on to another place after being consumed by flames. That Jo can realistically convey a wide range of emotions over the course of so few pages, without the aid of dialogue, but simply through relying on her strength as a cartoonist and ability to manipulate body language is impressive. That she turns the reader into an active participant though is even more so.

You can purchase 'Last Letter' here.

(This post was originally written for The Chemical Box)