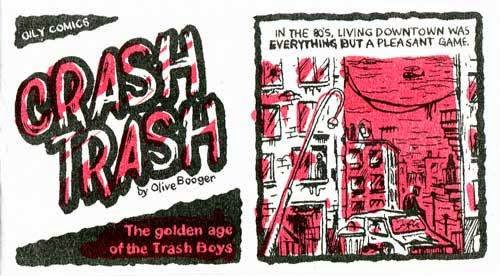 I think this is called a chap book. I am not sure. Pulling it out of the Oily bundle package reminded me of Building Stories. While the mini-comics that defined Oily still remained the bulk of the bundle, two lengthier entries by Noah Van Sciver and Charles Forsman were presented at larger dimensions and this short piece, existing at barely a quarter of a page in height, rounded out the package.


my immediate response to looking at this work is how closely it reminds me of two other somewhat recently released works. works which similarly existed in extremely limited number of pages but conveyed a deeply rich society within them. first is Gary Panter recently collected Dal Tokyo. Not that work as a whole, but just the first few pages or so. after the tenth page of Dal it progresses into something that i am left marveling at but not fully able (or capable) to grasp. like all of Panter’s work i digest it. am impressed with it. and promise myself ill understand it more next time. (theres always next time). Olive Booger borrows heavily from Panters more primitive and jagged line, while not as rigid and geometric, it no doubt evoke the idea of Panter. Everything is dirty and grimey and looks like the New York of Death Wish.


Crash Trash uses a faux-documentary style that has become one of the mainstays of michael defoge, who was the other person i thought of when looking at this. This style allows the narrative to move far faster and with greater depth than a more standard narrative device would allow. Instead of expository dialogue we only hit the highlights. no fat all filler. the Story itself is pretty funny. a group of gutter punks get beat up by another group after it is revealed they don’t really know how to fight,and instead just look tuff. After their defeat they move into trash bins to avoid being beaten up by the gang that has taken over their territory and create a society over the course of the ensuing 20 years; becoming hermit crabs of sorts.

you can buy Crash Trash at the Oily Comics site.
Posted by Shawn Starr at 9:32 AM