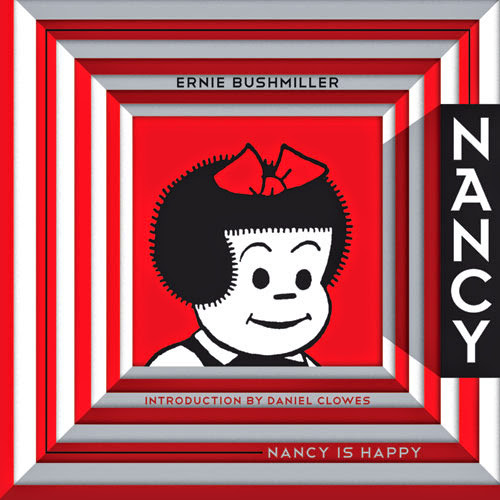 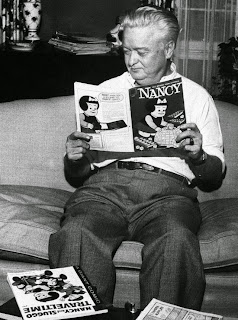 Daniel Clowes introduction to Nancy is Happy is quite possibly the oddest introduction i’ve ever come across. I try not to read introductions until after finishing the book, because far more often than not they act more as postscripts than introductions. Peter Bagge spoils his own work in Buddy Does Jersey for christs sake. The exception to this rule is comic strips, especially pre-1960 strips, where historical contextualization and author biographies tend to enrich the reading experience by a significant degree. Finding out that Roy Crane road the rails in college only helps you appreciate Captain Easy constantly ending up in the back of a train car in a last moment narrow escape. Due to most strips of the times gag a day nature, along with the repetition of adventure strips, any reference to future events in the strips at most causes minor “spoilers” of little to no significance.

Clowes’s introduction though does none of this. It doesn’t do

much of anything really. It, in conjunction with the introduction that follows it by a “Fantagraphics Editor”, argues that Nancy is devoid of contextualization. That any knowledge of Nancy creator Ernie Bushmiller as a human being outside of the fact that he drew Nancy for the period of time being covered in this book, is unnecessary and may, in some ways, be detrimental to the reading experience.The only thing that either introduction does is state that Nancy is a comic which can be read in hundreds of different ways and in each one still be funny. It can be read as a hacked out syndicate strip made up of gags pilfered from old joke books, just as easily as it can be read as a subversive comedy on American morals. Both arguments have equally merit, dozens of others also, even Clowes speaks briefly about going through multiple periods in which he enjoyed the strip for diametrically different reason (most gravitate between genuine enjoyment and ironic distancing), but at no point did he ever stop enjoying Nancy.


When I first read this introduction I was struck by how lazy it seemed, why not get Jeet Heer or R.C. Harvey to write an actual intro and move Clowes’s “essay” to the backmatter, so that they could still slap his name on the solicitation, while also having an “actual” intro in the front. But then I started to read Nancy and was left looking at a strip that I just couldn’t wrap my head around. Nancy is funny, but it’s not funny in the same way as say Peanuts, which covers much of the same material (children and childhood). Peanuts has rules to it’s universe, it is clearly a story told by an adult about children; even if the parents never appear on panel.

Bushmiller though revels in the absurdism of childhood. Where Schultz (and later Bill Watterson) make allusions to great literature, famous symphonies, or have their child stand-ins wax poetically about the meaning of life, Bushmiller is more interested in creating farce.In Bushmiller’s most high minded and allusionary strips he places Nancy in the role of an attempted-Modernist painter. While other strip artists may want to speak of the various critical theories of the artistic movement, Bushmiller simply has Nancy view the art as a child would, looking at the pieces in the museum and in her mind believing she could create that. What follows are five days of silliness as Nancy attempts a series of get rich quick schemes across every art gallery in town.


Unlike most other old gag strips, where several basic set ups and concepts are repeated but spaced out sporadically, (like Charlie Browns neverending quest to kick the football) Bushmiller attacks each subject over the course of a weeks worth of strips. This seems to give a large amount of weight to the argument of Bushmiller gathered his gags out of a joke book, since the repetition of jokes reads more like a chapter out of a joke book than an exploration of an idea at first. But it is in this repetition,day after day, that Bushmiller is hammering home his concepts. Something that, if stretched out months in time, he could not have properly communicated.

The most interesting, and often repeated, of these sets of strips deal with World War 2. Where strips of the time, like Roy Cranes Buz Sawyer, took great pains to show the homefront living in pre-war normalcy Nancy makes a point of showing the wars effects on the citizens living stateside. And while the premise of many of these gags seem trivial, Nancy and Aunt Fritz scrambling to find additional ration cards for stockings and shoes is an often repeated premise, the presence of that want underlies something that many strips of the era chose to overlook. It chips away at, however little, the veneer of normalcy perpetuated by the government at the time. 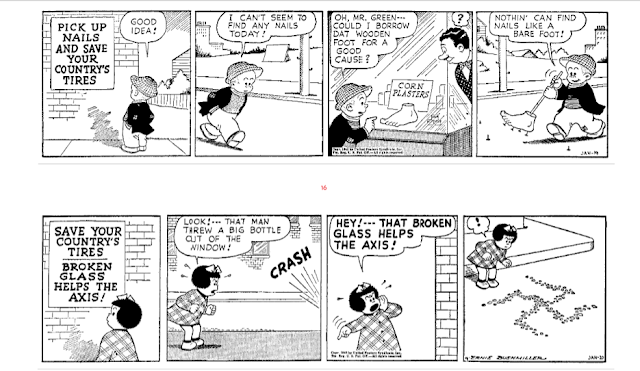 Nancy also takes great pains to explore the idea of wartime propaganda and its ability to instill fear in the populace. Like Joseph McCarthy saw communism on every corner during his red scare, Nancy sees Nazism everywhere. A cranky neighbor that refuses to buy war stamps is not simply an old crank, but rather, as only Nancy is able to discern, a Nazi. Nancy is able to surmise this not through anything as adult as evidence, but by the mans homes striking resemblance to the fuhrer. That many of these scenes take place immediately following Nancy and Sluggo reading posters put up by the war department is not a coincidence. The sincerity of childhood doesn’t allow Nancy to scoff at a poster declaring “Save Your Country’s Tires / Broken Glass Helps The Axis!” just as fear blinds many to the absurdity of propaganda; so that when Nancy sees a bottle shatter in the street after being thrown out of a window the pattern that the broken glass invariably leaves is that of a swastika.

These sets of strips although do have a problematic aspect. The final strip in each series has a tendency to involve Nancy & Sluggo actively advocating for the destruction of Japan. While the military aspects of the war in Europe are largely ignored, Bushmiller repeatedly makes allusions towards the destruction of Japan. These range from Sluggo blowing the island nation off of the globe with a firecracker to Nancy excitedly spraying poison gas on the Japanese Beetles that inhabit her garden.(Nancy has, in lieu of notches, etchings of the Japanesse flag on her poison sprayer for each insect killed). This particular ire towards Japan is not unique to Nancy, racial caricatures of the Japanese and a sense of vendetta runs throughout countless strips of the time, but it stands out so pointedly in Nancy because it comes out of seemingly nowhere. In a strip that is so critical of propaganda it turns a particularly uncritical and blemished eye towards Japan and Asia at large.

This racial problem is also compounded by Foy Foy, Nancy's friend of Asian ancestry. With Foy Foy, as with Japan, you see Bushmiller's hand creeping into the world of Nancy. And this incursion is not for the better of the work, as Bushmiller infuses his own prejudices onto a world that seems unwanting of them. Of the five strips that Foy Foy appears in two have punchlines centered around slanted eyes, two more are given over to mocking his language and the fifth shows him exterminating Japanese Beatles with Nancy.

Nancy is quite clearly Bushmiller, but while for the majority of the collection she feels like her own separate entity it is in these twenty or so strips that you are reminded that this little girl is the creation of a middle aged man.