Open Up Your Murder Eyes: Part 2 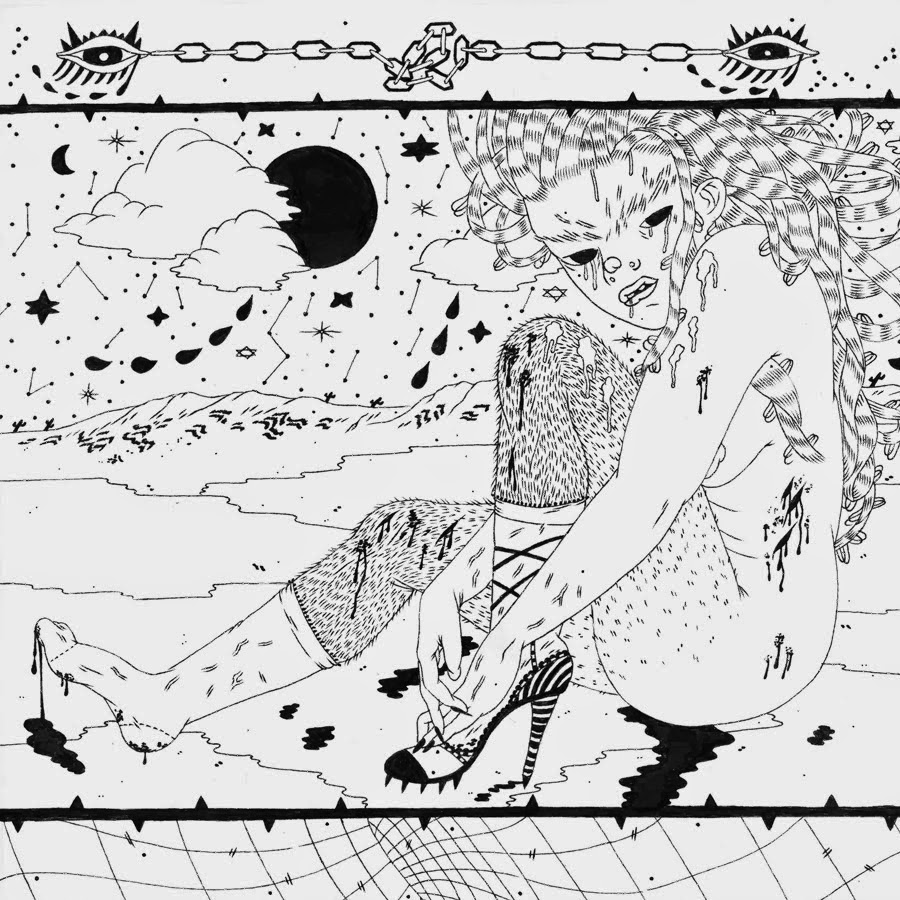 Part One can be read here.


Most people would attribute the act of sequencing to panel borders. Borders control the way in which the readers eye moves across the page, both  the speed at which you process the information on the page and how quickly your eye reads the page. Small and compact panels placed next to each other in quick succession force the eye to move faster, while double page spreads, showing one single moment, force you to take in the whole event at once. Additionally the eye has a natural tendency to read images from the top left of the page to the bottom right. Long vertical panels therefore force the eye to move up and down with little to no horizontal movement, while horizontal panels force them to move right to left with limited vertical motion.


Heather Benjamin does not use panels, although this does not stop her from controlling the readers eye. Dragging the eye left or right, up or down, not with borders but by the way she draws details, her backgrounds, how shocking she decides to make the image, what areas she chooses to leave empty and where she chose to implement language. All of these tools, played individually or in concert, allows her to move you across the image as she chooses. 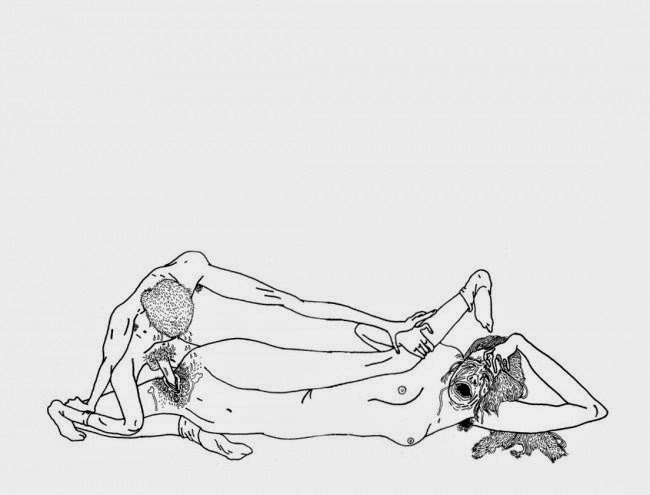 The artwork in the first half of Sad Sex is rather simple, both in its line and backgrounds. There is not a lot for the eye to hold onto visually. This in many other cases would result in a rather fast read, as the eye recognizes the image and moves on quickly due to its simplicity. But the content of Sad Sex keeps this from happening. It is filled with alien imagery, things you are not used to seeing, literally sad sex. Viewing a sexual act where both parties are sobbing and clearly uncomfortable with the acts taking place is such a foreign concept in most of art that the long streams of tears flowing down each individual's faces holds your eyes in a way that the same image, devoid of these tears, would never.


The downfall of this though is that the rest of the image falls apart, the eye focuses on the points of carnage rather than the image as a whole. This is why in many of these early images there is no backgrounds at all, they wouldn’t be looked at even if they were present.


As Sad Sex goes on though Benjamin becomes a much more accomplished artists, and by the final third of the book her compositions are strong enough that she is capable of intentionally guiding the reader's eye to and from the more shocking content in each image.This is vital for the continued appreciation of her work, because as each image piles up the contents shock value begins to dissipate. As your eye focuses on the teary faces, they start to blend together, and by page forty they are just a part of everything else again. 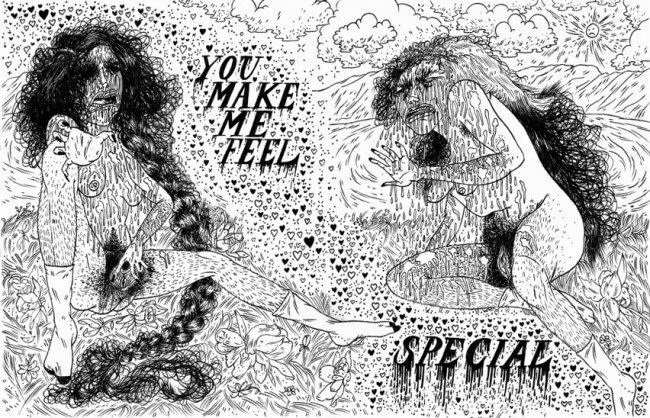 The two page spread "You Make Me Feel Special" is a good example of Benjamin's leap in ability from the early pages of Sad Sex to the later.


From the top right we see a series of hearts along with, momentarily, the woman on the lefts braided pony tail flowing alongside the words "You Make Me Feel" downwards and to the right, leading us to the next figure and the remaining part of the title "Special". This is in keeping with the natural flow of the eye. It is easy and happy. Non-complex.


But there are conflicts in this reading. This is only how you would read this image if you ignored the two women on either side of the page, and simply chose to focus on the cheery phrase "You Make Me Feel Special" and a trail of hearts. But these two women have their own agency, and so a contradiction is at play here. Like all good comics the text should not betray the picture by making its point to clear, and here it explicitly does not. The figures inside the composition are fighting against this flow. "You Make Me Feel" can be a good thing just as easily as it could be a bad thing. The same goes for "Special". These two women act out both of these dual scenarios, pulling and pushing away your eye, your gaze, to reflect their own feelings on their given phrases.


The woman on the left has her right arm fully extended, reaching out, begging for you to stay.
With her left hand, in a last ditch effort before your eye breaks the plane of the double page spread and moves onto the second page and the "other" figure, she is spreading her vaginal lips as wide as she can. Trying to catch your eye. This spreading is taking place just above the last few inches of braided hair which have balled up beneath her, creating a large black mass at the bottom of the page surrounded by flower petals. In her final gasp the figure even kicks her left leg over the page gutter and into the other figures space, almost touching the word "Special" but, almost poetically, she is a few centimeters short. Her foot and sock just can’t quite reach it.


This effort of course does not work. But not for lack of either figure trying.


If you look at the balance of data on each page, the densities of each figure and their backgrounds, you will notice the area surrounding the woman on the right is rather open compared to that of the woman on the left, whose entire upper torso area is surrounded by trails of hearts. The area surrounding the figure on the right though is much less dense, depicting only a small whirlpool (which surrounds her upper torso and head) and a mountain range. This largely empty space has the effect of drawing the readers eye along the horizontal axis towards it and  away from the more info dense area’s of the page. That this area is also inhabited by the figure who does not wish to be viewed is part of the tragedy of the piece. 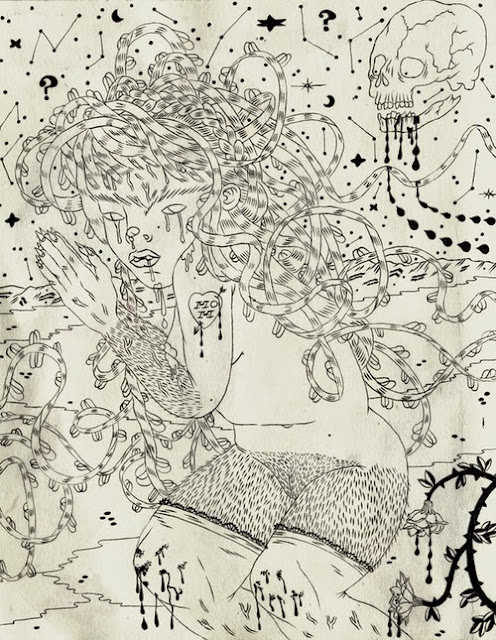 In Exorcise Benjamin made her intricate backgrounds a hallmark of her work, like a S.Clay Wilson image there is very little space left unstained by ink. Benjamin litters her backgrounds with data that the eye must compute instinctually for perceived meanings stars, UFO’s, constellations, various iconography and animals. These background images therefore have the role of creating the base speed for reading each image.


With this base speed in place Benjamin is then allowed to shift the densities of the background data around her page to create her own form of panel borders. Leaving some areas blank while others almost black with ink, she is able to both draw and repulse the readers eye to any area she wishes.


In addition to densities there is also the use of language. Since so few words are used in Exorcise, when they do appear your eyes lock onto them immediately. That is why when you look at the earring saying “Shut Up” on the first page of the book yours eyes give it the same amount visual importance as the woman cutting her nipple off. Both are foreign, one from the book and the other from life. Or the above image, even as her hair takes over the entire image the heart tattoo with "Mom" inscribed within it becomes the images focal point. 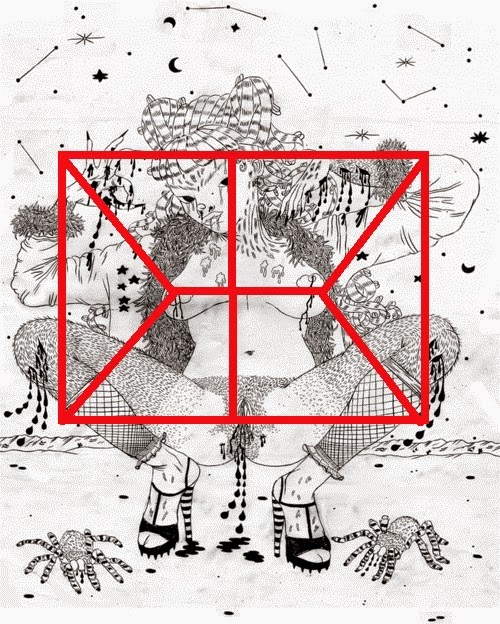 with apologies to frank santoro / i made this in ms paint so please pardon the hackishness of it.


In the image above we see a woman squatting. Her body is bleeding in symmetry with itself and its environment. The first thing your eye moves to is her right hand, which is making an "Okay" sign and bleeding in concert with her left hand that is dangling lazily downwards. Bellow, on the same vertical axle as her hands, you see that she is also bleeding from her knees. Upwards slightly and on a different vertical axis is her midsection, where both of her nipples are bleeding. Looking at the middle axis of the image we see the woman's face, which is characteristically bleeding, a third of the way down the page, and along the same vertical axis, we see the figures menstruating vagina.


While much of Benjamin's use of cosmological symbols are merely background details, her use of constellations in this image perfectly compliment the lines of symmetry for the figures bleeding. Two constellations are connected through an acute angle, which connect the hands, breasts and knees together. The five other constellations pictured are connected purely through straight lines, which creates the box with a line through it connecting the hands to the knees and face to the vagina as shown above.


The area's connected through these lines of symmetry share several characteristics that are repeated throughout the series, and while hands and knees have a certain non-reproductive sexual connotation, which are counteracted through the often repeated bleeding of the breast and its implications of motherhood, the most important is between the face and vagina.


These two area's become the focal points in the majority of the images found in this book, both independent of each other and, as in the image above, dependent on each other. Much of the "filler" imagery, the shoes, stockings, coats, backgrounds and especially the hair draws the eyes to these area's.


As i mentioned in section (3.1) hair above the shoulders plays an important part in drawing the readers eye towards the face. With its intricacies and detail the eyes lock onto it, follow it, and because of its proximity with the less detailed, but equally beautifully drawn, face the eye instinctually is held there as a resting spot. Similarly, and especially in the image above, the hair below the neck also draws the readers eye towards the vagina. As the eye recognizes each strand of hair on the figures legs, and above from the fur of the figures jacket, the white space of the inner thighs where hair is absent pulls the eye towards the  images second focal point, the vagina.


You can purchase various works from Heather Benjamin at her webstore. Additionally Benjamin has an eight page-broadsheet available from Floating World Comics titled Delinquent.


You can view her Tumblr here


(7.1) image attribution
The header image is from the cover of the Hidden Fortress's anthology Monster.
All other images are from either Sad Sex or Exorcise.