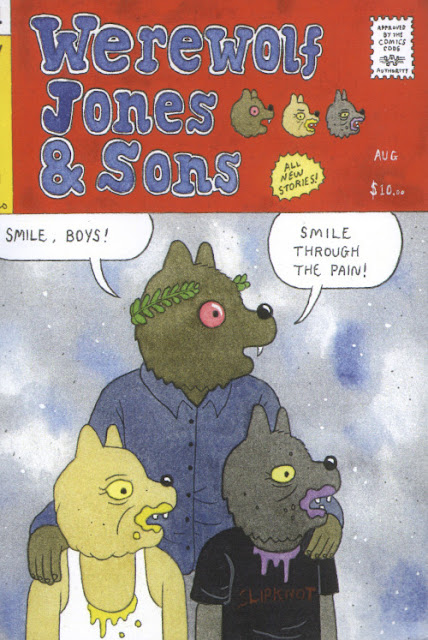 Werewolf Jones and Sons
By Simon Hanselmann and HTML Flowers


Werewolf Jones is the most depraved, disgusting and vile member of Simon Hanselmann’s stoner comedy Megg, Mogg and Owl. He is also the funniest. And while the best moments of Hanselmann’s comics are the exploration of the psychological roots that lead to each character's eccentricities, primarily those based in loss, depression, addiction and anxiety, Werewolf Jones exists outside of these moments of characterization. Even in flashbacks to high school the teenage Werewolf seems almost identical to the one currently slated to die of an overdose sometime next year. So that as fucked up as the rest of the cast is, they can always be judged against Werewolf.


Werewolf Jones and Sons is the first prolonged narrative centering on Werewolf Jones, clocking in at 52 pages, it is an anthology of sorts, a series of five short stories drawn by either Hanselmann or HTMLFlowers. These long form stories tend to be platforms for Hanselmann to delve deeper into a character's persona, but in Werewolf Jones and Sons there doesn’t seem to be anything to delve into. In story after story you see Werewolf do the worst things imaginable, try to smuggle his children through airport security in garbage bags after giving them sleeping pills, trash a principal's office who questions his parenting skills, and again and again Werewolf learns no lesson. After his arrest in the first story he simply asks about his ETSY hat store.

While Werewolf Jones and Sons does not directly reference it, the lingering knowledge of Werewolf's death begins to take on more and more emotional weight as this book goes on. That this is by far one of the funniest books Hanselmann and HTML Flowers have produced so far seems almost secondary after the initial read, because the lack of any change in Werewolf Jones starts to burrow into your brain. You are seeing a character kill himself, slowly and over an ever diminishing number of pages.Every laugh is leading up to the call Megg and Mogg get while sitting on there couch next year...
Posted by Shawn Starr at 10:58 AM