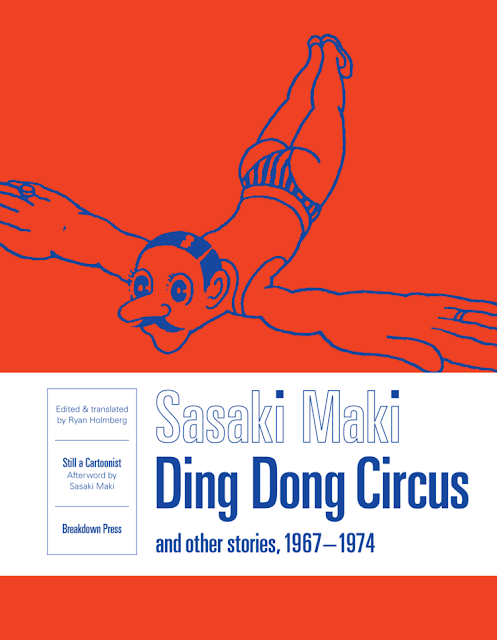 
I keep thinking about this book, even after putting it away over a month ago.


It’s the first Ryan Holmberg manga project i'm genuinely confused by, but that makes it even more interesting. Holmberg always digs up challenging work but Ding Dong Circus is something else, it is such an out-of-left-field take on comics that it immediately made me start to rethink what i believed the term to even mean.


Almost every panel in Ding Dong Circus plays off each other to create a feeling, and every page plays off each other to create a theme, but at no point is a narrative, or anything that could be called a narrative, taking place. Even in the rare examples of panels that feature the same character you are left feeling like these are just threads left for the reader to attempt to hang the hope of story on, rather than an actual story devices. They exists as a trail of breadcrumbs left to nudge you along to the end. It undercuts the basic premise of comics, sequential panels, for something else. Panels that live and die on their own, but when collected form something greater than themselves.  Not a story, but a thought that’s built on and undermined on every page.
Posted by Shawn Starr at 8:10 PM