There's A Kid On The Street, One Up In Bed

(a reprint of an interview on a book you should buy.) 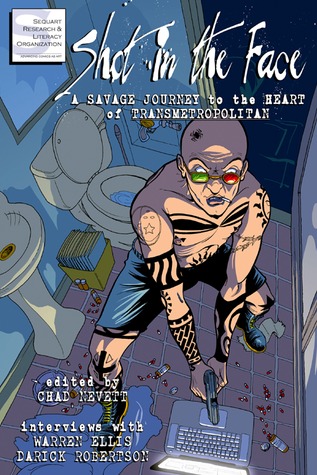 "This week, I am going to catch up with fellow C Box contributer, co-host of the greatest comic book podcast The Splash Page, and all around great human being Chad Nevett. Chad edited and contributed essays to the long awaited new Sequart book release 'Shot In The Dark: A Savage Journey to the Heart of Transmetropolitian' which is available to purchase from Amazon and other  fine book retailers right now. Here's a little info on that release...." - Joey Alusio

Shawn Starr: How did you come to edit a book about 'Transmetropolitan' for Sequart?

Chad Nevett: Blame that, like my other big writing gig (for CBR), on Tim Callahan. He wrote his Grant Morrison book for Sequart and they wanted him to do something for their website. He decided to do a discussion column and asked me to do it with him. That was January or February of 2008... the beginning of the Splash Page. We did that for Sequart's site and, in the process, I got added to their e-mail list when new projects would come up and they would open the call for essay pitches. I wound up doing three essays over a few years, one for their 'Watchmen' book and two for their 'Planetary' book. Shortly after the 'Planetary' book came out, I began talking with Mike Phillips about doing something for them, hopefully a book entirely by me. They had asked for three book ideas and I had two: one about Jim Starlin's cosmic work and an anthology about 'Hellblazer'. I figured that I'd give them one idea that's all me and one essay collection to increase my odds of actually getting something done. But, I needed a third idea. Really, those were the two projects that I was excited for at the time, so I threw in something about 'Transmetropolitan'. I'm a big Ellis fan and I had some ideas about the book and... well, I needed a third idea and I didn't think Joe Casey would sell, you know?

Turns out, "Warren Ellis" was the name to mention at Sequart at the time as they were looking to launch a bunch of projects surrounding Ellis. They already had the 'Planetary' book and the documentary about Ellis that Patrick Meaney had done would be coming out, and a couple of more books gave them their "Year of Ellis" project. They're a fan of the anthology books -- and I can see why given the variety of topics and writers you can utilize in anthologies -- and, since they already had a single-author Ellis book scheduled, I think they wanted another anthology to complement the 'Planetary' one. So, they asked if I'd be interested in editing it. I figured what the hell, should be fun... 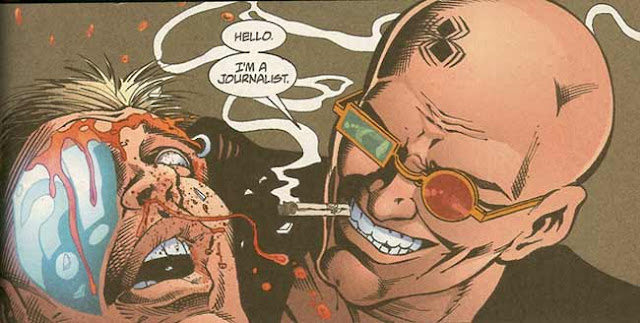 Do you have a personal connection to 'Transmetropolitan'? It seems like a work that, if read at the right time in ones life, can have a lasting effect on you.

You can say that it came along at the right time in my life to make a lasting impression. I want to say that I began reading it in January 2000, so I was around 16/17 (my birthday is in January), I was politically minded, feeling trapped in a bit at Catholic school, feeling like I was smarter than everyone around me, and hungry for stuff like Transmet that would both validate and challenge what I was thinking and feeling. I had been an Ellis fan for years, first having my 12-year old mind blown when he took over Thor and, when I first tried out Transmet, was pissed off because he had just left 'The Authority', which was a comic that I was obsessed with in a big way when it was coming out. I literally carried the first four issues around in my backpack for months, randomly pulling them out and just re-reading and flipping through them. And Transmet went beyond that stuff.

I started out with "Year of the Bastard." My shop had all six issues in the back issue bin, so I plunked down my cash and was introduced to the world of Spider Jerusalem. I don't know if I had started reading the comic from the beginning if I would have been so taken with it. But, beginning with the big politics story arc was the perfect thing to hook me. And, in the process, Warren Ellis introduced me to Hunter Thompson. It's not coincidental that that's where I began the series and the essay that I wrote for 'Shot in the Face' is a look at the influence of Thompson upon 'Transmetropolitan'.

After I discovered Transmet, I'm sure the people around me found me a little more annoying. I covered my binder with quotes from the book and talked shit and talked politics like I knew what I was talking about... it was a good time. Transmet was the second half of high school for me along with Thompson and Mark Leyner (who I learned about from a Transmet letter page!) and all sorts of obnoxious self-righteousness that's yet to wear off entirely... 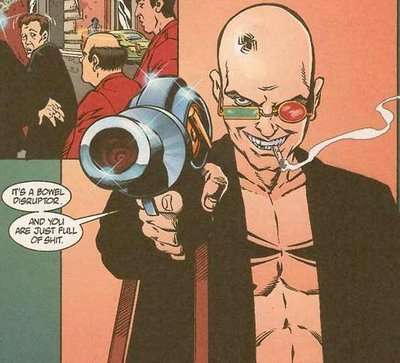 What was your editorial approach to the book. Do you see it as an academic piece of criticism or something more free flowing?

Well, Sequart's aim is more academic than anything and I have spent six years in the world of academia, so I think there's an academic approach/feeling that's hard to escape. However, that's not something that necessarily drives me in a project like this. I tend to be a bit more free flowing as a writer. Once you've got that smart, academic base, you should feel free to push things and chaff against it a bit. I was hoping for a book that contained a nice variety of voices rather than a more unified feel that you might find in an academic journal (though, there can be some nice variety there as well, don't get me wrong). If I had to choose between voice and adhering to an academic approach, I usually sided with voice. But, that's because I also knew that I had guys like Mike Phillips and Julian Darius backstopping me. I could afford to push things a little bit that way, because they (and the rest of their editorial team) would stop things from going too far outside of what they think fits with Sequart. 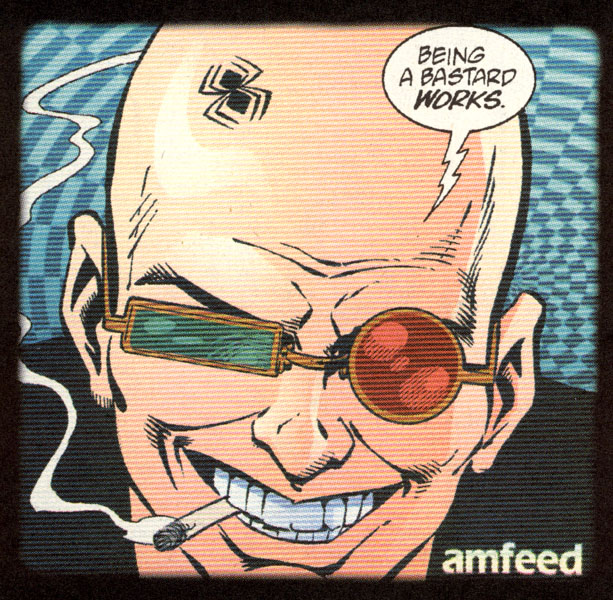 Did your opinion of 'Transmetropolitan' change during the process of working on the book? Was there any contributors whose essay’s changed how you thought about the work?

I have a pretty strong opinion/view when it comes to Transmet, so I wouldn't go so far as to say anything changed during the process of working on the book. I think it's more accurate to say that I was exposed to ideas that I hadn't previously considered. I didn't agree with all of them, but that's hardly the point. Julian's essay on the structure of the book made me rethink the way that the series was put together. Namely, I knew it could be broken down into six-issue chunks because that's how the trades were put together, but I never looked beyond that. I never noticed how Ellis used three-issue groupings throughout the run... except for year two. I never thought about how "Year of the Bastard" and "New Scum" are the only six-issue story arcs in the series. It was an angle that I had never considered that I really liked thinking about for a bit there.

Almost every essay had at least one moment like that where I saw some aspect of the book in a way that I hadn't before. I don't agree with the majority of Greg Burgas's essay (let the internet feud begin!), but he makes a good case and he made me consider the way that I viewed Spider's relationship with women. It influenced part of my essay comparing Hunter Thompson and Spider, and each of their relationships, not just with women but with men, too. That was a big appeal of the project and something that I hope readers take from the book. I know it's something that I've loved about the Sequart anthologies I've read. 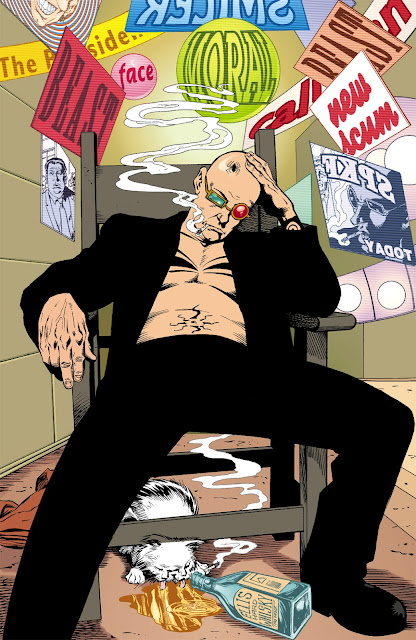 The book seemed to be delayed for a while, was there a specific reason behind that?

There were two main reasons. The second one is an easy explanation: it took time to transcribe Warren Ellis' interviews for the documentary and we wanted to include what he said about 'Transmetropolitan' in this book. I love when books like these have some author interview and Sequart has a wealth of Ellis interview material in the footage that Patrick Meaney shot with him, and it's a great idea to cull the appropriate parts for books like these. Transcribing those interviews took time, so the book wound up getting delayed until those transcriptions were done.

The first reason for delay is a little tougher to explain. Basically, I learned that I like writing, but I don't like editing. It's not something that I find natural or comfortable. I can revise and rework things I've written, but handling things written by others is tough for me. I think my limit of comfort is reading an essay and making some notes on it. But, this project required more than that and it took me a long time to be able to do that. Far longer than it should have. Thankfully, Mike and Julian were both very understanding and very encouraging. I'm glad that I did this, but I definitely learned that editing is not something that I enjoy.

It's a little weird to say that, because I did love working on this book. It was a pleasure working with Mike and Julian from discussing possible topics to reading essay pitches to reading the essays to working with Kevin Colden on cover ideas... It was a blast and I am really proud of the book. I just don't want to edit another book again. Ha.

Any cool stories involving a chick?

This one time, I got my wife pregnant...

(This interview originally appeared on The Chemical Box)
Posted by Shawn Starr at 1:30 PM